A Field Guide to Spicy Food in Greater Phoenix 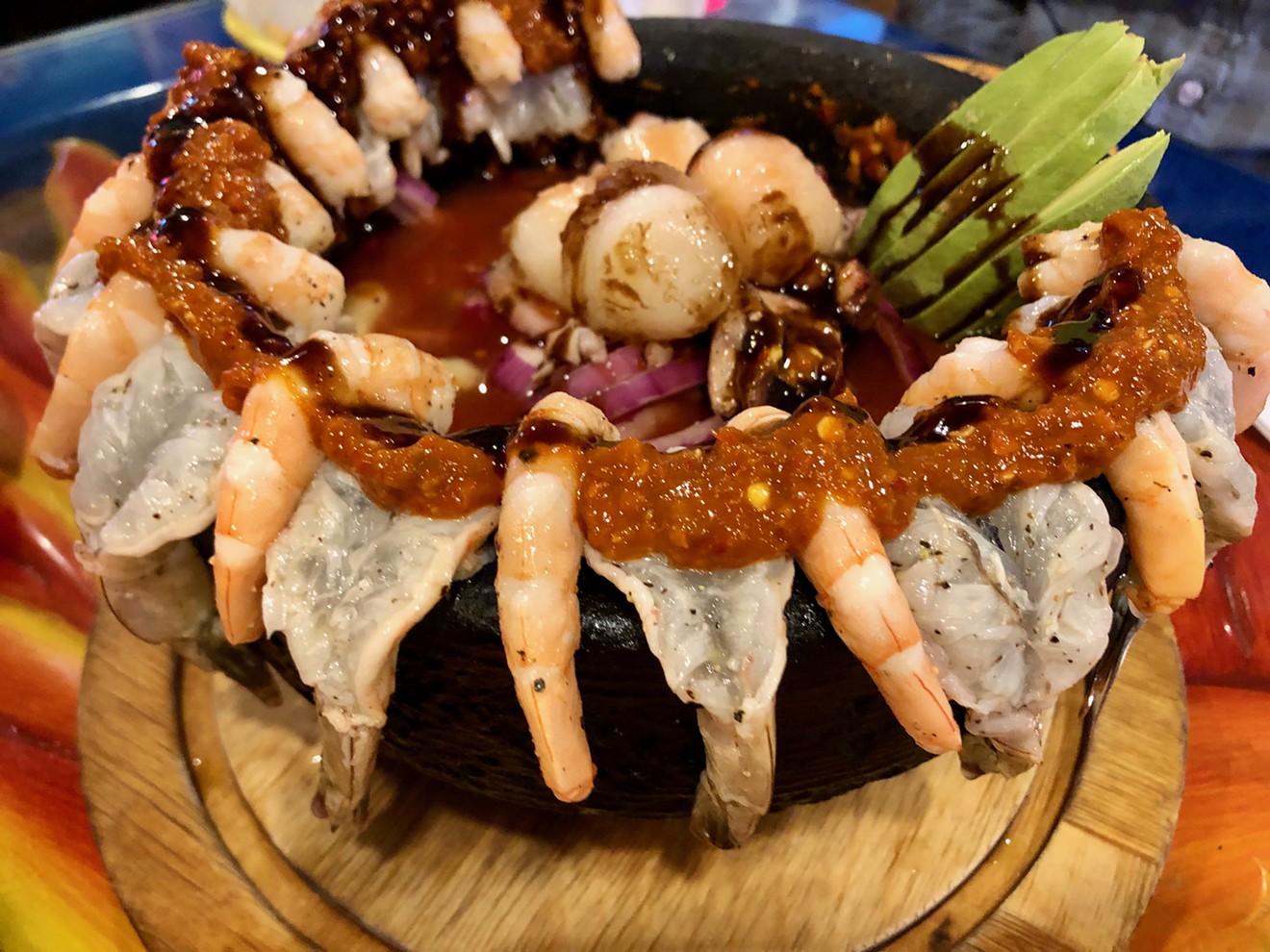 Attempting El Peligroso Challenge at Mariscos Playa Hermosa. Lauren Cusimano
A lot of people associate spicy food with the winter months, equating piquant heat with an all-over warming effect. But, as it turns out, there's a reason that some of the world's spiciest foods come from the hottest regions.

Research shows that the "gustatory facial sweating" that one experiences after eating something particularly fiery actually activates a cooling effect. To that end, we created this guide to surviving Phoenix’s infamous summer temperatures with hot-as-hell dishes that will definitely put a sheen on your forehead.

Around since 1972, Someburros (with multiple locations in central Arizona) offers a Sonoran-style Mexican menu with several items labeled as "picante." One of the breakfast specials is the El Diablo Scramble, which consists of chorizo, jalapeños, white onions, and potatoes all scrambled with eggs. It is a dish that begs to be doused with a final lashing of hot sauce. Another house special is the Crudo Burro, consisting of machaca beef with a spicy, light green tomatillo sauce. There are also jalapeños available as a side, and house hot sauce sold in half pints, full pints, and quarts.

Mariscos joints are another go-to for spice fans. Aside from the spicy world of aguachiles, some dishes can get so spicy, it becomes a challenge.

At Mariscos Playa Hermosa, find the El Peligroso. This is a raw seafood bowl filled with roughly eight to nine different chiles and spices. There is raw aguachile shrimp, as well as just-cooked shrimp, plus octopus, scallops, onion, cilantro, and lime juice. However, it’s now more commonly referred to as the peligroso challenge according to owner Emmanuell Maldonado. It's so spicy, it took a while for someone to even finish the thing. One of the Richardson's restaurants, Rokerij, offers red-hot dishes like:
• The Rokerij steak with jalapeño hollandaise.
• The Sandia Chicken Pasta, which features a green chile linguine, roasted peppers, and red pepper sauce.
• The Chimayo Chicken with poblano chiles and Asiago cheese, glazed with Sriracha red chile.
• Richardson’s Combo, a jalapeño Benedict smothered with jalapeño Hollandaise and your choice of red or green chile.

With two locations in Scottsdale, Jalapeño Inferno has a section of the dinner menu titled “Some Like It Hot!” There you'll find Enchiladas Nuevo Mexico covered in red enchilada and “inferno” sauces, and Courtney’s Burrito, which comes likewise smothered in Inferno sauce and topped with chile “rajas.”

With locations in uptown and south-central Phoenix, Los Dos Molinos offers some famously hot salsas along with spicy dishes like the carne adovada burro (comes with chunks of pork marinated in red chile); the red chile corn tamale; and the Victoria’s chicken chile plate, all of which come with a choice of New Mexico red chile or smokin' hot Hatch Valley green chile. When it comes to hot-enough-to-make-you-sweat gourmet sauces, a scorching option is Los Muertos Salsa, based out of Glendale, whose tagline is “where chips go to die.” Find jars of their stuff at the Uptown Farmers Market. But many local hot sauces don't compare to the locally run Big Red's Hot Sauce.

And for the absolute hottest habanero-inspired hot sauces, turn to Cutino Sauce Co., which comes in three flavors: habanero, verde, and jalapeño. Grab a bottle at Pane Bianco or the Gilbert Farmers Market, or drizzle it on a dish while dining at The Farm at South Mountain, Pig & Pickle, Tempe Public Market Cafe, and so many more.

Starters are a good way to awaken your taste buds for what’s about to come, especially if it’s hot. Consider warming up with some Hell’s Fire Chips – homemade potato chips drizzled with hot sauce and melted bleu cheese – at AZ/88 in Scottsdale. In the West Valley, with locations in Buckeye and Surprise, Booty's Wings offers Loaded Buffalo Gold Fries – a pile of crispy, double-cooked French fries hidden under a blanket of spicy cheddar jack cheese, bacon, jalapeños, ranch dressing, and buffalo gold sauce.

The cash-only college town staple that is The Chuckbox brings the atmosphere as well as the heat (and we’re not just talking about the wood-fired grill you have to wait next to) with the Tijuana Torpedo. The burger comes with the eatery’s iconic beef patty topped with jalapeño jack cheese and a green chile. You can take things up a step further at the mixings bar by adding jalapeños and Arizona Gunslinger hot sauce.

Other burgers that pack some heat include the Habanero Cheeseburger from the super-kitschy Carlsbad Tavern in Scottsdale, which has ground habanero chili mixed in with a burger patty that's topped with jalapeño jack cheese, as well as the El Diablo burger, which is served with fire-roasted jalapeños, pepper jack cheese, and chipotle mayo at Zinburger in Gilbert, Scottsdale, and Biltmore Fashion Park.

Chicken wings are an obvious barometer of one’s heat tolerance. Do you go for mild, medium, or straight to the extra hot, suicide, and other beyond-hot levels? The Valley has more than a few eateries with wing flavors to test your mettle, including the extra hot Zipps Wings at any Zipps Sports Grill, suicide heat level wings at any Long Wong’s, and toxic wings at ATL Wings.

With locations in Tempe, Ahwatukee, and Chandler, Zzeeks Pizza & Wings offers the ultimate test with their wing option tossed in Arizona Gunslinger’s Mega Diablo Extra Hot Pepper Sauce. Don’t be surprised if you start to sweat, then start to feel a little loopy, then feel shivering cold after a few of these babies, because the guy behind the counter at Zzeeks probably gave you fair warning that they were going to “melt your face off.” 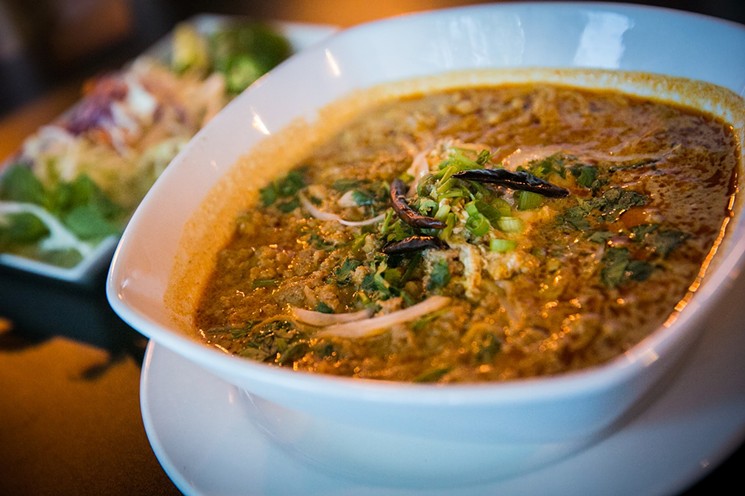 The Dreamy Draw area Thai eatery Redthai Southeast Asian Kitchen, offers a menu of particularly spicy dishes like Spicy Red Curry, the House Dynamite, and Spicy Basil. Anything you order "Thai hot" here is sure to open up your sinuses. Over at Sa Bai Modern Thai, found on Thomas Road and in Tempe, order the Spicy Seafood Soup, Spicy Fried Noodle, or Spicy Fried Rice, all of which feature both Thai and poblano chili peppers. Finally, head to Smile Lao Thai in Tempe for the Mii Kathii, a coconut rice noodle soup with peanut sauce, offered at heat levels one to five. Order the five, if you think your tongue and guts are up for it.

Pho Thành Restaurant has plenty of traditionally spicy dishes, like the pho tai and lemongrass chicken, but you can also turn up the heat on anything you order, as every table comes standard with bottles of Huy Fong Chili Garlic Sauce and Sriracha. Try the bo xao cai chua sate, stir fried sour mustard greens with beef and chili oil and the com bo xao xa ot, steamed rice with stir fried beef and lemon grass. 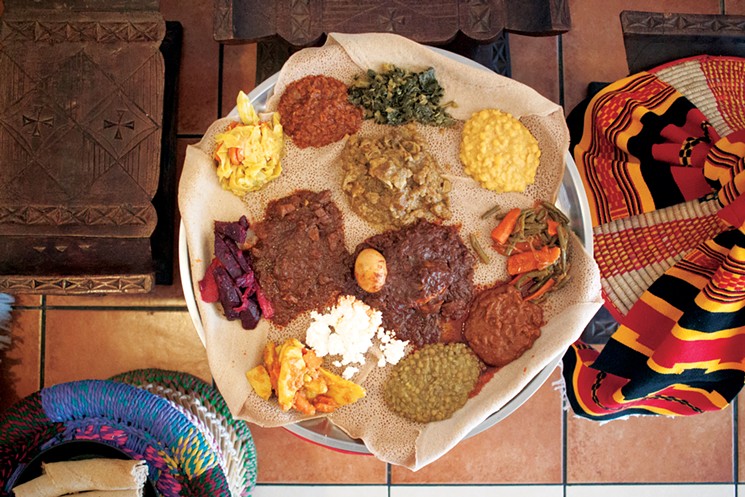 For some East African fire, head to the family-owned Cafe Lalibela and order a Spicy Combination. It features their famed spicy chicken stew, doro wat, along with two other wats-kye sega wat (spicy beef stew) and misr wat (a vegetarian dish of medium spicy lentils).

Over at Abyssinia Restaurant and Café, the piquant Firm Tibs offers a choice of prime beef or lamb cooked with grilled onions, jalapeño, and Ethiopian butter. Finish your spicy tour of Ethiopia at Gojo Restaurant, with an order of kitfo, chopped lean beef seasoned with ghee and ground pepper as well as the gored gored, cubes of lean meat cooked with clarified butter and spicy red peppers.

Chengdu Delight Cuisine has some pretty spicy dishes, including a great one called Chongqing spicy bone-in chicken dish, as well as the best spicy cabbage. is named after the capital of the Sichuan province, a region famed for peppercorn-laced, fiery hot cuisine.

There is no wrong way to order here, as long as you order your dish spicy, but perhaps the most essential dish at Chengdu Delight is the hot pot, a Sichuan staple that revolves around a scarlet-colored chile broth and which, like Japanese shabu-shabu or fondue, is a communal crowd-pleaser. Also try the mapo tofu, which comes swimming in a luscious, piquant sauce that begs to be cooled down with steaming jasmine rice.

The Fire Chicken at Drunken Tiger is a slow burn.
Lauren Cusimano
Korean

Over in Mesa, Hodori Restaurant warns patrons of the sweat-inducing dishes with a double-chili icon, which you’ll find next to ahgu chim, a monk fish braised in spicy, pepper-laden sauce with bean sprouts.

Mesa’s own Korean pub serves big beers and bulgogi fries, sure, but Fire Chicken at Drunken Tiger is just that — fire. Little chunks of white meat are “cooked in an extremely spicy sauce” and then topped with sprinkles of melted mozzarella and green onion. It’s a slow burn, and toward the end of the dish, if you make it, you’re definitely reaching for the bottle of Cass more and more.

Sweet and Spicy: Cocktails and Desserts

The tongue tingling pleasure of peppercorns and chilis doesn't have to end with dinner. Go for spicy sweets at the Cerreta Candy Co. in Old Towne Glendale, where you'll find a dark chocolate cayenne pepper chocolate bar in 1-ounce and 4-pound options.

Editor's note: This story was originally published on June 13, 2017. It was updated on July 11, 2019.
KEEP PHOENIX NEW TIMES FREE... Since we started Phoenix New Times, it has been defined as the free, independent voice of Phoenix, and we'd like to keep it that way. With local media under siege, it's more important than ever for us to rally support behind funding our local journalism. You can help by participating in our "I Support" program, allowing us to keep offering readers access to our incisive coverage of local news, food and culture with no paywalls.
Make a one-time donation today for as little as $1.