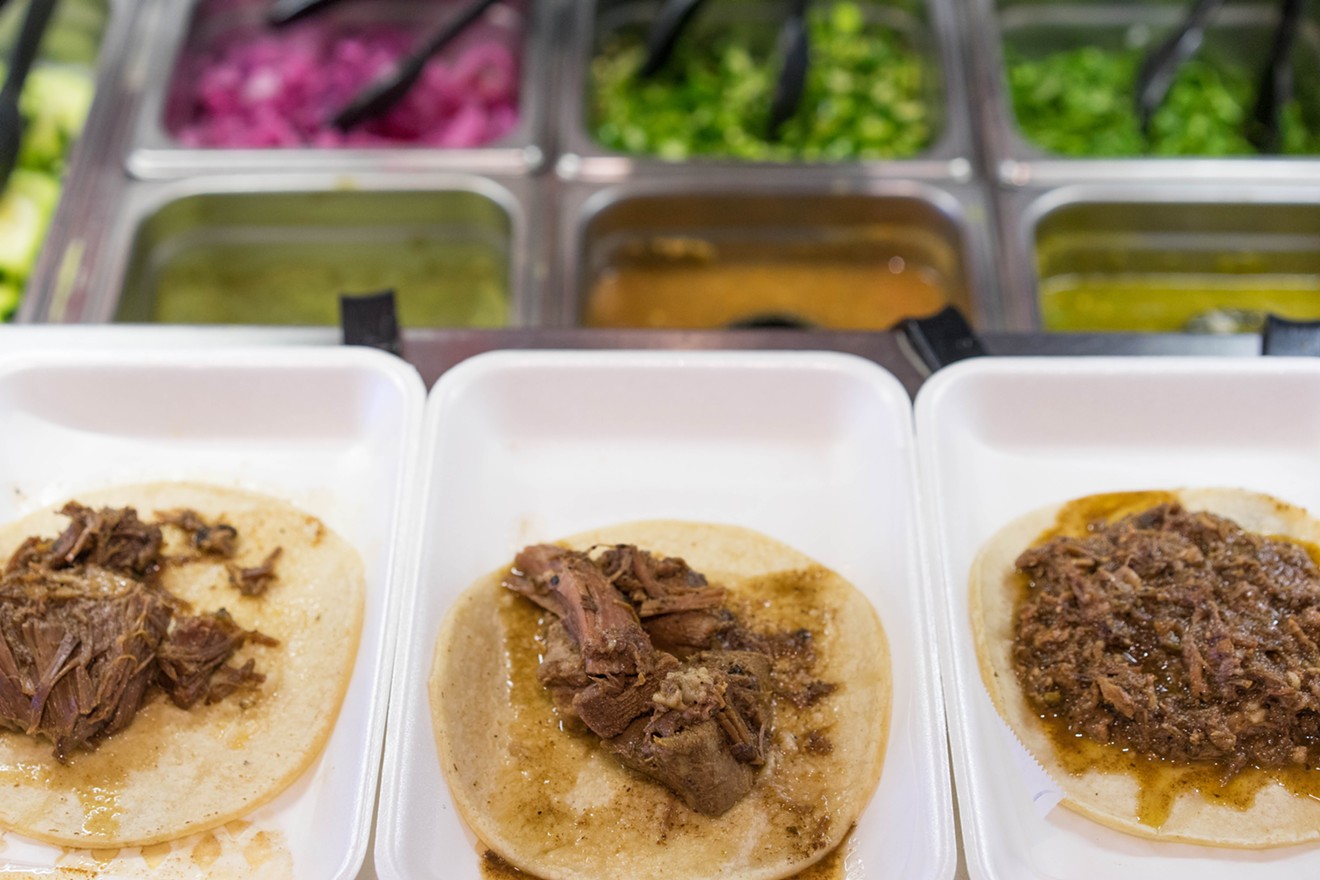 Slow-cooked meat tacos from left to right: barbacoa de res, lengua, cabeza. Shelby Moore
In the hunt for the latest trendy restaurants, our spotlight often misses neighborhoods that are home to some of the Valley's best kitchens — including those making metro Phoenix's best tacos. Over the next several weeks, we’ll be guiding you toward the Valley’s tastiest tacos, and the taquerías that serve them. Welcome to Taco Summer.

A few portions of the dozen slow-cooked stews at Taquería El Chino have survived the lunch rush, though some just barely. Rafael Ung tosses a few more ribeye steaks over his mesquite charcoal grill, just in case some stragglers come in for an order of the shop's most popular item, the carne asada burrito.

Last time the dish was mentioned in the Phoenix New Times, our restaurant critic, Patricia Escarcega, called it too much of a good thing. And indeed, it’s massive, likely carrying close to an entire steak in each burrito. But, as we’ve learned, carne asada is in high demand in Phoenix.

In the 1920’s, our city was home to the Tovrea Stockyards, the world’s largest feedlot. And, long before that, the area in which we live belonged to the Mexican State of Sonora, where cattle and ranching were the main economic drivers for centuries.

So, it's really no wonder that carne asada is an essential staple at nearly all independently owned Mexican restaurants in the Valley. It's so popular, in fact, that it often steals the spotlight from more regional specialties on the menus. This is only partially true at the Sonoran Taquería El Chino, where the asada is very much a specialty, but where the braised meats remain unsung heroes.

Before we get to the many barbacoas and stews that Ung slowly cooks throughout the day, I wanted I find out from him what makes a good carne asada, and what makes his version different than everyone else's.

Rafael takes a lot of pride in his carne asada, despite the fact that he spends mere minutes cooking it, unlike the hours he invests in his many stews. One point of pride is his use of ribeye cuts, as opposed to the more common (and cheaper) flank or skirt steaks. Ranchers would, and still do, sell more expensive cuts and keep the rest for themselves, leaving thinner trimmings that cook up quickly over a mesquite wood fire. So his variation is actually a break from tradition.

“When you combine the charcoal with the ribeye, you set yourself apart. Good meat doesn’t need marinade. Just salt," he said. "Charcoal. Salt. Meat.” 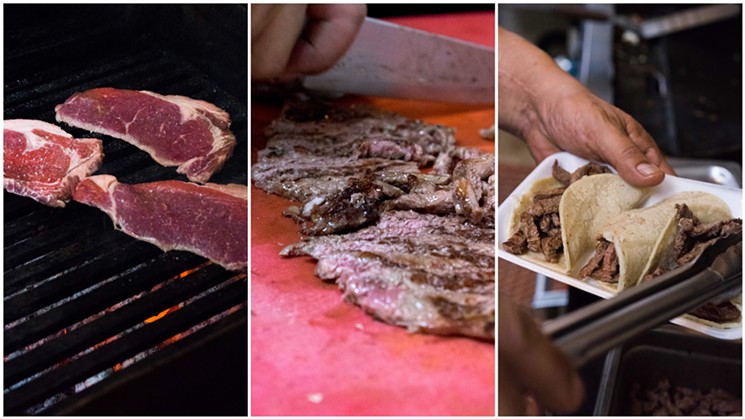 Three variables make Rafael Ung's carne asada unique: mesquite charcoal grilling, salt, and rib-eye steak.
Shelby Moore
Ung is originally from Hermosillo, the capital city of Sonora, Mexico. His grandfather was Chinese and immigrated to Mexico at the turn of the 20th century to build rail roads at at time when the country was attempting to modernize its largely rural northern states. Ung grew up in the La Matanza neighborhood of Hermisollo along with many other decendants of early Chinese immigrants — many of whom, including Ung’s grandfather — were deported back home without their families once the railroads were finished.

“Those who lived in the neighborhood became know as Los Chinos,” Ung says. “The Chinamen.” It is a moniker that would live on as the name of the family's chain of restaurants.

Ung’s immediate family moved to Phoenix when he was seven, and he spent most of his professional career working in finance as a mortgage broker. 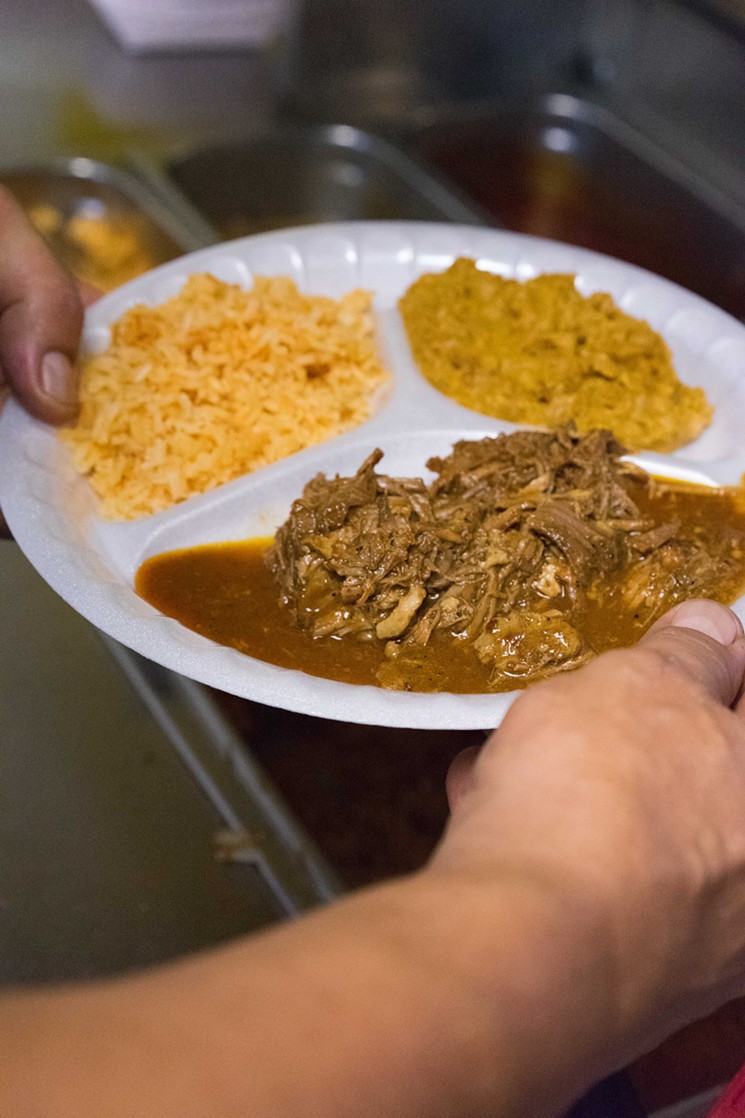 Any meat or stew at El Chino can be ordered as a plate, on tacos, or in a burrito.
Shelby Moore
Beyond the carne asada that Ung serves exclusively here in Phoenix, all locations of El Chino specialize in the braised and barbecued meat stews of Northern Mexico, most of which make use of the whole animal.

Barbacoa is the Mexican word for barbecue and traditionally refers to a dish of cow's head, which is wrapped in banana leaves and then slow cooked in a pit over mesquite coals. Ung's versions include other cuts of turkey, pork, both red and green chile beef, separate batches of cheek and tongue, and combination of beef lip, cheek, and tongue, all of which is cooked until it’s reduced to a rich, nearly past-like consistency.

There are many El Chino locations in Ung's hometown of Hermosillo, but I wonder if there's room for his Sonoran offerings to grow here in Phoenix. “People like to eat,” Ung replied. “There’s always more room to grow.”

The name El Chino is a reference to the Ung family's Chinese-Mexican heritage.
Shelby Moore
Our Taco Summer picks so far: