The 10 Best Vegan Burgers in Phoenix

There’s a lot more to a good burger than meat. In fact, some of the best burgers in the Valley have no carne to speak of at all. From bulging black bean sandwiches to portobello patties, here are ten of the best meatless burgers around Metro Phoenix.

The Big Wac at Green New American Vegetarian
Multiple locations
Green New American Vegetarian is well-known for its mock meats, and The Big Wac burger is both a vegan and a carnivore favorite: two hand-packed, plant-based patties between sesame seed buns slathered in “special sauce” (a vegan mayo-based condiment), and topped with crisp lettuce, vegan cheese, pickles, and onions. B1 at Beaut Burger
3301 East Indian School Road
Every item at Beaut Burger is vegan and highly lauded, but when it comes to a “basic” burger substitute, it doesn’t get any prettier or tastier than Beaut Burger’s B1. The restaurant’s signature from-scratch patties (made with veggies, beans, millet, and spices) are topped with house-made ketchup and mustard, and locally sourced lettuce, onions, and pickles. Pick your buns from split-top potato, English muffin, or gluten-free chia and millet.


Tepary Burger at The Coronado
2245 North 12th Street
One of the cool things about The Coronado is the owners’ focus on locally sourced ingredients. The restaurant’s Tepary Burger utilizes one of Arizona’s ancient indigenous crops, a light-colored legume called tepary beans, as the base for a bean-and-mushroom burger adorned with arugula, tomato, pickles, onion, and the ubiquitous “secret sauce” every vegan eatery seems to have.

Anything from Bitchin’ Burgers
4810 North Seventh Street
This relatively new Central Phoenix outpost of the popular California food truck/stand serves a slew of reliable and adventurous vegan dishes. Building on Beyond Meat patties, the menu at Bitchin’ Burgers  boasts a classic-style burger and a mushroom patty dripping with melted “cheese.” Both are served with a choice of chips and hummus or a house salad. 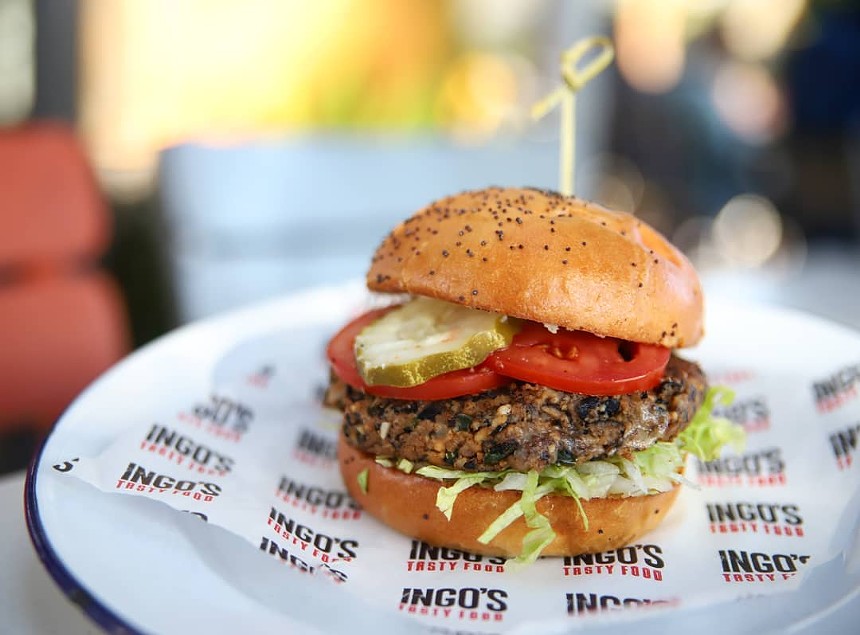 Black Bean Burger at Ingo’s Tasty Food
Multiple locations
With locations in Arcadia and Downtown Phoenix, Ingo’s can sate cravings for its black bean burger in more than one place. Piled with poblano peppers and a spicy, house-made nut cheese, the black bean burger packs quite a kick — one that can be cooled with a long gulp of Ingo’s lavender lemonade.

Green Goddess Burger at Pomegranate Café
4025 East Chandler Boulevard, #28
A longtime favorite of Valley vegans, Pomegranate Café serves a garden-fresh spin on a burger with a chickpea-spinach-herb patty covered in pepita pesto and sprightly toppings of red onion, greens, and tomato, and doused with a sunflower ranch dressing. It makes a hefty and healthful meal, especially served with a side of rainbow salad or baked fries.

Beyond Vegan Burger at Hopdoddy Burger Bar
Multiple Locations
For those who enjoy washing their plant-based burgers down with a cold craft beer, Hopdoddy Burger Bar offers local brews on draft, and they all go well with the Beyond Vegan Burger. All about the condiments, this burger boasts a layer of gooey vegan gouda and vegenaise (likely both Follow Your Heart brand), and a small garden of veggies on a fluffy, chewy, and hardy wheat bun.

Portobello Burger at Pita Jungle
Multiple Locations
Pita Jungle remains a mainstay among mindful eaters for many reasons, and the portobello burger is a big one. The roasted bell peppers give this grilled mushroom delight a piquant tone, which is balanced by the sweetness of caramelized onions. Pesto brings a bold, herbaceous punctuation mark. Ask for your burger without a bun or in a pita pocket to make it vegan.

Black Bean Burger at FEZ
105 West Portland Street
Beyond its marvelous margaritas and martinis, FEZ can brag about its black bean burger. The black bean patty is mashed with cumin and garlic before being grilled and topped with red onion slaw and goat cheese (get it without for a vegan version). Bonus: It’s perched on a pretty perfect ciabatta bun.
KEEP PHOENIX NEW TIMES FREE... Since we started Phoenix New Times, it has been defined as the free, independent voice of Phoenix, and we'd like to keep it that way. With local media under siege, it's more important than ever for us to rally support behind funding our local journalism. You can help by participating in our "I Support" program, allowing us to keep offering readers access to our incisive coverage of local news, food and culture with no paywalls.
Make a one-time donation today for as little as $1.