We Review Two Tapas-Size Spots — and One Doesn't Disappoint A whole duck platter from Bri. Jacob Tyler Dunn
If your idea of a memorable meal involves digging into three or four shareable dishes in one sitting, I have good news for you. Two new globally inspired small-plates restaurants, Bri and Tres Tempe, have opened in metro Phoenix this year. And one of these is especially worth your attention.

Bri (rhymes with “cry”) is situated in the cozy Coronado bungalow that most recently housed the Vietnamese restaurant Rice Paper, which moved nearby. The space has been extensively renovated and newly outfitted with custom wooden tabletops, old-fashioned farmhouse chairs, vintage cookbooks tucked into decorative nooks, and a more intimate bar area. It feels warmer and friendlier than its predecessor.

It should be noted that Bri is not really a South African restaurant, though. Various culinary traditions collide on the menu, most prominently Italian, Korean, and Sichuan-style Chinese, to name a few. The diversity reflects Mellody’s eclectic culinary resume, which includes restaurant consulting gigs and a stint as executive chef at Otro Cafe. If there’s an operating philosophy at work in Mellody’s kitchen, it could be described as “anything goes.” In the case of Bri, “anything goes” is often shorthand for very good. The interior of Bri on Seventh is an old house turned restaurant.
Jacob Tyler Dunn
Before you dig into the chef’s small but compelling menu, it’s worth exploring Bri’s cocktail program. There are plenty of novelty seasonal drinks on hand – the summer cocktail list includes drinks like the Brilini, a blend of sparkling wine and peach liqueur, served with a house-made tart cherry ice pop. But bartender Michael Brown also mixes serious yet unfussy drinks, like the Carda-momma Said Knock You Out. Made with Commerce gin, lime, elderflower, and cardamom, the drink’s clean flavors are skillfully embellished with a spicy flash of aromatics.

A good introduction to the chef’s handiwork are the braised pork spare ribs. The gently charred pork hunks, slicked in a flavorful fermented black bean sauce, are beautifully caramelized and intensely rich.

Mellody’s “drooling duck” dish is on a similar plane. The duck breast, glazed in a chile-tinged sauce, is rich, salty, and irresistibly fatty. More simple, but equally satisfying, is a smoky, succulent, wood-roasted duck leg garnished with crispy garlic.

Frico caldo, a riff on a northern Italian potato-cheese crisp, is a little more uneven. Pan-fried cheese, shaped into a thin wafer, dovetails against a loose, herb-spackled potato pancake. It’s messy, but has the allure of old-fashioned comfort food: crispy and richly savory. The dish’s flavors are nicely sharpened by a sweet and tangy tomato relish. 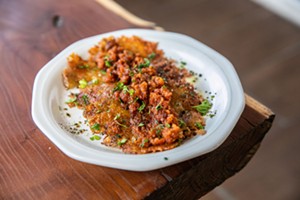 Bri specializes in small plates.
Jacob Tyler Dunn
The most inventive dish on the menu is Mellody’s lychee “scallops.” The soft white flesh of the fruit, a clever stand-in for the slippery mollusk, is gently seared and tossed in a chilled carrot curry sauce. Sweet and gently spicy, it’s uniquely delicious.

Mellody also has a way of coaxing big flavor out of vegetable plates. A cold salad of green beans, zapped with kimchi, is refreshing and pleasantly garlicky. A simple plate of crisp radishes, served with a wonderfully tangy house-made virgin butter, is surprisingly indulgent.

The chef plans to change the menus seasonally. It will be interesting to see what he comes up with as the seasons turn and the restaurant matures. For now, though, Bri’s small plates game is too good to ignore.

Platters at Bri are ripe for sharing.
Jacob Tyler Dunn

Like Bri, Tres Tempe specializes in globally inspired, creative small plates. (The “tres” in the restaurant’s name refers to the three sizes of dishes on the menu: small, tapas-size plates; medium plates; and larger, shareable meals).

Where Bri is small and quirky, Tres Tempe is big and nondescript, with a beige facade that blends right into the corporate office park where it sits next door to a massive hotel. Business travelers and office workers seem to make up the bulk of its clientele.

The interior is sleek and pleasant, with shiny concrete floors, tall exposed ceilings, and a spacious open kitchen with a wood-fired stove. The centerpiece of the dining room is an oversize island bar with TVs playing sports on mute.

Tres Tempe immediately registers as slick and corporate. But it’s not without its virtues. Executive chef Steve Zimmerman, a veteran of the resort kitchen circuit, brings some culinary clout to the kitchen. And the bar menu, for one, is impressive. Funky wine flights featuring Arizona and New Mexico wines? An extensive selection of Spanish sherries? More mezcals than you can sip in one sitting? They’re all here.

The menu, described as Spanish and Mediterranean with Southwestern influences, leans heavily on happy-hour fodder like build-your-own charcuterie boards, featuring a robust selection of import Spanish cheeses and ham.

And there are flatbreads, which are too frequently the stuff of yawn-inducing, work-mandated lunch meetings. But they’re surprisingly well-executed at Tres Tempe — sturdily built, with elegant, slightly charred crusts. The “pork trifecta” is a sweet-salty flavor bomb embedded with Spanish chorizo and crisp flakes of bacon, and lightly smeared with spicy pork njuda and fig marmalade. The “verde” flatbread is simpler, but no less indulgent. It’s inevitably delicious, a melty pastiche of pistachio pesto, mozzarella, fontina, and creme fraiche.

Classic Spanish tapas get their turn, including a credible rendition of papas bravas that involves lightly smashed, beautifully crisped-up fingerlings. The potatoes are dressed in a rich pumpkin seed romesco and dabbed with a spicy harissa-spiked crema.

Take the kitchen’s Brussels sprouts carbonara. The roasted veggies, tossed with bacon and prosciutto and topped with a fried onion streusel, are smothered in an unctuous, grainy cream. The dish is a slog. Moroccan pork wings — long, meaty lollipops lacquered in a harissa honey sauce — are a touch too sweet. And the tres cheese torte, a sort of spicy ricotta enchilada bake, is swimming in an overly tart tomatillo sauce. It’s surprisingly humdrum.

In the end, Tres Tempe is kind of a wash, the sort of restaurant whose earnestness helps balance out its deficits.

Tres Tempe
7192 South Price Road, Tempe
480-897-5300
Hours: Monday through Thursday 11 a.m. to 11 p.m.; Friday & Saturday 11 a.m. to midnight; Sunday 11 a.m. to 9 p.m.
Pork trifecta flatbread $14
Chickpea fritto misto $8
Crunchy shrimp lettuce cups $13
Moroccan spiced pork wings $16
KEEP PHOENIX NEW TIMES FREE... Since we started Phoenix New Times, it has been defined as the free, independent voice of Phoenix, and we'd like to keep it that way. With local media under siege, it's more important than ever for us to rally support behind funding our local journalism. You can help by participating in our "I Support" program, allowing us to keep offering readers access to our incisive coverage of local news, food and culture with no paywalls.
Make a one-time donation today for as little as $1.
Patricia Escárcega was Phoenix New Times' food critic.
Contact: Patricia Escárcega
Follow:
Twitter: @piescarcega