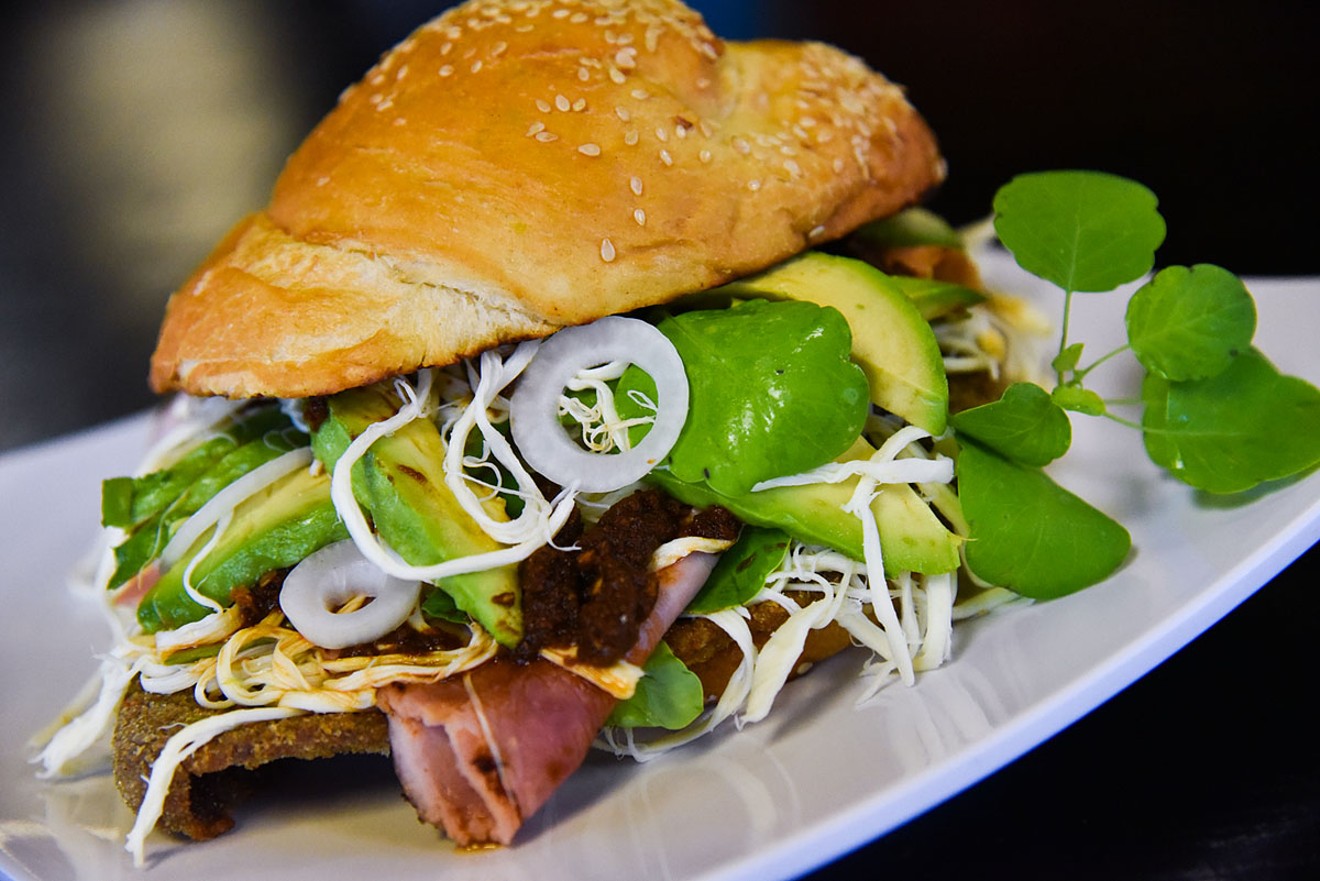 The most formidable sandwich I've encountered so far this year is the cemita poblana at La Poblanita Mexican Grill in west Phoenix.

It's a gargantuan sandwich, roughly the shape and size of a kid's catcher's mitt, layered with pounded-thin sheets of fried steak, slices of ham, and avocado, and topped with ribbons of Oaxacan cheese. The sandwich is light on dressing and condiments — just a smear of palate-tickling chipotle salsa on one half of its sesame-seeded cemita bun, a drizzle of olive oil on the other, and a couple leaves of papalo, a seasonal Mexican herb with a distinctly floral kick, tucked into the heart of the sandwich.

This Puebla-style cemita is arguably the king of the Mexican sandwiches — the lactic tang of the Oaxacan cheese, melded with the saltiness of the ham and Milanesa, is delicious and unforgettable. And it is still kind of a rare food find around metro Phoenix. The version at La Poblanita is not without flaws — the Milanesa steak could have used a little more seasoning on a recent visit — but it goes a long way toward filling the terrible void of very good cemitas around town.

The cemita poblana, I'd argue, is reason enough to pay a visit to this mom-and-pop Mexican restaurant that opened in Maryvale a little more than a year ago.

At first glance, the small, standalone restaurant near 75th Avenue and McDowell Road looks like another in the crowded pantheon of local 'Bertos-type clones. It has a drive-thru, a gritty parking lot, and a sun-faded exterior.

Inside, though, the dining room is far more pleasant: friendlier and brighter than you might expect. Swags of rebozos paired with glittering charro hats adorn the walls. The inoffensive melodies of '80s Mexican pop hits trickle in, filling the dining room with the soft strains of acoustic guitars and bubbly synthesizers.

The menu at La Poblanita, for lack of a better designation, is distinctly Arizonan-Poblano, which means you'll find plenty of concessions geared toward the local palate. There are carne asada fries, for instance, and they're worth every sticky, cheesy calorie. True to its name, though, La Poblanita is a restaurant with Pueblan soul, and the best things on the menu are renditions of traditional central Mexican dishes.
click to enlarge

Cemitas aside, the thing to order at La Poblanita is the mole poblano, which is darkly ruddy and a little thick. It's dappled with sesame seeds and draped over a succulent chicken thigh, but your attention will be on the mole, which hints at nuts, garlic, and chocolate. Like most well-made moles, this one represents a delicate and skillful balance of flavors. No single ingredient asserts itself too boldly. It's bitter, spicy, and sweet, all at once, the kind of richly sophisticated dish that has the power to both confuse and dazzle your palate. If you appreciate a good mole, this one is not to be missed.

Picaditas poblanas, a classic Puebla-style antojito, are another highlight. Picaditas are similar to sopes, but slightly thinner and flatter. The corn masa is usually pinched around its circumference to create a sort of berm for holding sauce. One order will score you four of the flat, chewy, corn discs, two of which are topped with a spicy salsa verde, and two with a fiery red chile sauce. The picaditas are rich and lovely all on their own, but for a small upcharge, you can top them with one of the restaurant's braised meats. Try your picaditas with some of the house green chile — the extra-spicy, saucy pork is lovely and seems to melt right into the corn masa.

Let me pause now to sing the praises of the chipotle chicken at La Poblanita, which is labeled simply on the menu as "chipotle." It's a rich, gravy-like chicken tinga, smoldering with spices and kissed with chile-roasted smoke. You can order it in several configurations — in a taco, burrito, or, best of all, spooned over some of the kitchen's freshly-made sopes or picaditas. It's wonderful.

The menu at La Poblanita, for lack of a better designation, is distinctly Arizonan-Poblano, which means you'll find plenty of concessions geared toward the local palate.
Alexandra Gaspar

Tacos, of course, are ubiquitous and plentiful, but the ones at La Poblanita deserve a shoutout. There are five meats to choose from (asada, al pastor, green chile, grilled chicken, and that heavenly chipotle chicken) and they're all credible enough to give your favorite taqueria a run for its money. The asada, topped with finely shredded purple cabbage and served on one of the restaurant's slightly toasted, crisped-up tortillas, has a delicate char that is hard not to love.

La Poblanita has a small but strong breakfast menu, which includes a very good, blisteringly hot plate of huevos rancheros. If you want to get back to basics, though, might I suggest bolstering yourself for the rest of the day with a plate of enfrijoladas?

There is nothing fancy about enfrijoladas, which is essentially a dish of bean-smeared enchiladas stuffed with cheese and pasted together with more refried beans. This is farmhand food, the kind of dish designed to feed a dozen mouths with little more than tortillas and beans. But the beans, pressed to a fine, soft muddle and expertly seasoned to enlarge the simple flavors, achieve a kind of richly indulgent quality.

It's this kind of hearty, comforting regional fare that La Poblanita does so well — dishes that are often executed with bold flavors, little fanfare, and with what feels like a whole lot of heart.