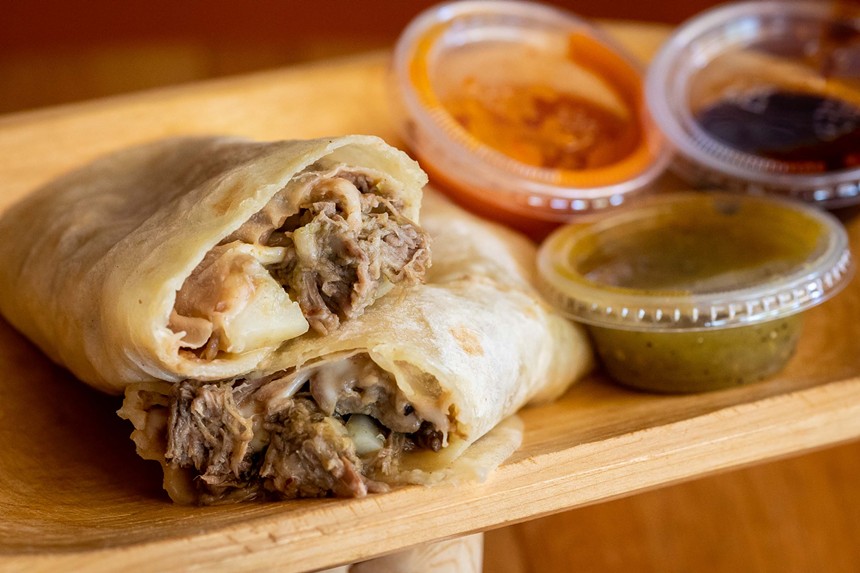 The flour tortilla-rolled burritos at Testal Mexican Kitchen.
Jacob Tyler Dunn
If you think Mexican food is supposed to be cheap, I have bad news for you: Pulque Fine Mexican Cuisine is serving a $35 ribeye with yellow mole. Chef Danny Medina is frying $14 piles of calamari breaded in blue corn. His servers shake a $16 Codigo Blanco margarita kissed with lavender, the glass paved with black lava salt.

And each dish is worth every penny.

Medina has cooked in some of the priciest, fanciest restaurants in the Valley, places like Dominick’s Steakhouse and The Capital Grille. In the first days of 2021, he opened a one-room, 48-seater in Scottsdale with white tablecloths, a modest bar stocked with agave spirits, a painting of Frida Kahlo on one wall, and a few plants.


But Medina’s food deserves some attention. It adds something to the Mexican dining scene north of Via Linda: a high-end restaurant that leads with substance rather than lavish style.

To begin, even the chips are piping hot and have a telling sheen of oil. They are clearly fresh. Each brings a giant crunch, a welcome opener.

That $35 steak speaks volumes about the restaurant. No thicker than an inch, the buttery ribeye has grill marks so picturesque they might be out of a TV commercial. Though mine was cooked slightly past medium rare, the meat was rich and tender, a really solid steak. The steak sat in a yellow mole fiery with smoke and vegetal intensity of guajillo and chile de arbol, yet mild, mellow, and restrained enough to let complex, dusky spicing come through.

Medina also cooks many of his fine Mexican dishes with charming creativity. For instance, his fried calamari has a breading light and airy, almost tempura-like in its finesse. You dunk purplish rings showered with parsley and sliced chile into a tangy mixture of apricot and chamoy. It has to be one of the most unique calamari dishes in town.

The menu at Pulque has range. If you stop by at lunch, you can grab tacos and tortas. The dinner menu abandons these entirely and moves into plate meals. These include soups, salads, ceviche, and a handful of entrees, most of which are grilled and alive with yellow, red, or green mole. Medina, who is from Chihuahua and has lived in Arizona for 35 years, focuses on the foods of Puebla and Oaxaca. Mole stars.

He studs an arc of jiggly grilled scallops in a smear of green mole. Composed of chiefly serrano, jalapeño, and poblano peppers, this mole has a sharp, clean heat and the freshness of many untraceable herbs yet also richness. The scallops are a touch sweet on bites undominated by mole and cooked without much of a hard sear, but nicely.

I also enjoyed the flautas — hot, crunchy rolled tacos made of the same hot, oil-slick substance as the chips. These cigarillos are filled with juicy chicken, zagged with crema, and lifted with the same yellow mole as the steak.

The drinks at Pulque are worth trying even though, in my experience, they are the handiwork of your server and not a dedicated drink specialist. No problem. (The margaritas were good enough to warrant real estate in my recent story on the tequila cocktail.)

Pulque’s version of a Cadillac margarita (a sub-style of the cocktail that uses headier booze) uses Codigo Blanco, Cointreau, and agave syrup infused with lavender. The lavender is scant yet seems to bring the tequila, lime, and rich agave into total balance in an elusive way. It’s a satisfying drink in a town where the margarita bar is high.

I found myself thinking similarly positive cocktail thoughts while drinking across town at Testal Mexican Kitchen on Grand Avenue in Phoenix. The burrito shop offers many cocktails made with sotol. The one I was sipping riffed lightly on the Paloma. Tart and fruity, almost totally bereft of sweetness, fresh as an ocean wave from grapefruit and carbonation, the cocktail plays with gentle saline and grassy notes in gentle ways the original doesn’t.

The many bottles of sotol and many sotol cocktails are just one reason to love this burrito joint, opened in late 2020 on the same boulevard as Bacanora El Charro Hipster Bar and Cafe. Together, this stretch has grown into one of Phoenix’s greatest and most character-driven blocks for Mexican food and drink.

Run by Fernando Hernández, Testal spotlights traditional preparations from Chihuahua doled out in burrito form. Tubs of picadillo, deshrebada verde, and chile Colorado are prepared in homestyle fashion in a tight space. Hernández strives to be true to the region, right on down to the sotol selection, the art, and the merchandise for sale.

These burritos use flour tortillas — wildly fresh and fragrant ones. They are soft and pliant, lacking much chew at all, and they hug their fillings tightly. These babies are newborn, still beautifully warm from being griddled. The word “testal” refers to a dough ball pressed into tortillas; this restaurant’s name reflects its stretchy priorities.

The chicharron burrito features soft bits of pork skin. Even through the heat, these have a humble porcine intensity that grows even more enjoyable once you add beans and cheese ($.30 extra each). The deshebrada is another keeper. Melting, flavor-packed beef sops with green sauce that ripples with heat.

Speaking of heat, Testal just added a new salsa negra to its roster. This salsa consists of sunset-orange oil floating atop dark bits of pulverized chile. It’s glorious — great dapped onto the chicharonnes.

Jacob Tyler Dunn
Testal has a trio of thoughtful aqua frescas worth exploring. The pinole, mixed from roasted corn, is the best. It leads with sugary, milky notes and then trails out into a subtle-but-wild flourish of roasted, deeply earthy corn.

Pinole is an indigenous drink with a storied history on both sides of the border. In Sacaton, on Ramona Farms, on the Gila River Indian Reservation, you may be told about the history of drinking Pinole-sweetened beverages for energy if you buy some of the farms’ pinole in dry form— crushed roasted corn. That such a pleasant version comes in to-go bottles at Testal is a blessing.

I would roll by Testal for a quick burrito. It ranks in the top tier of burrito rollers in the city. I would come for a cocktail, or to sit and knock out some work after breakfast, or to taste sotol neat, or to feel good about the new generation of Mexican food. The newer guard is showing promise — both on the higher end and at places you can eat like a king for a few bucks.

Pinole $3.50
Burrito de deshebrada $5.00
Burrito de chicharron $4.50
Guacamaya stool $12
KEEP PHOENIX NEW TIMES FREE... Since we started Phoenix New Times, it has been defined as the free, independent voice of Phoenix, and we'd like to keep it that way. With local media under siege, it's more important than ever for us to rally support behind funding our local journalism. You can help by participating in our "I Support" program, allowing us to keep offering readers access to our incisive coverage of local news, food and culture with no paywalls.
Make a one-time donation today for as little as $1.
Chris Malloy, former food editor and current food critic at Phoenix New Times, has written for various local and national outlets. He has scrubbed pots in a restaurant kitchen, earned graduate credit for a class about cheese, harvested garlic in Le Marche, and rolled pastas like cappellacci stuffed with chicken liver. He writes reviews but also narrative stories on the food world's margins.
Contact: Chris Malloy
Follow:
Twitter: @yollamsirhc
Instagram: @malloy_chris/