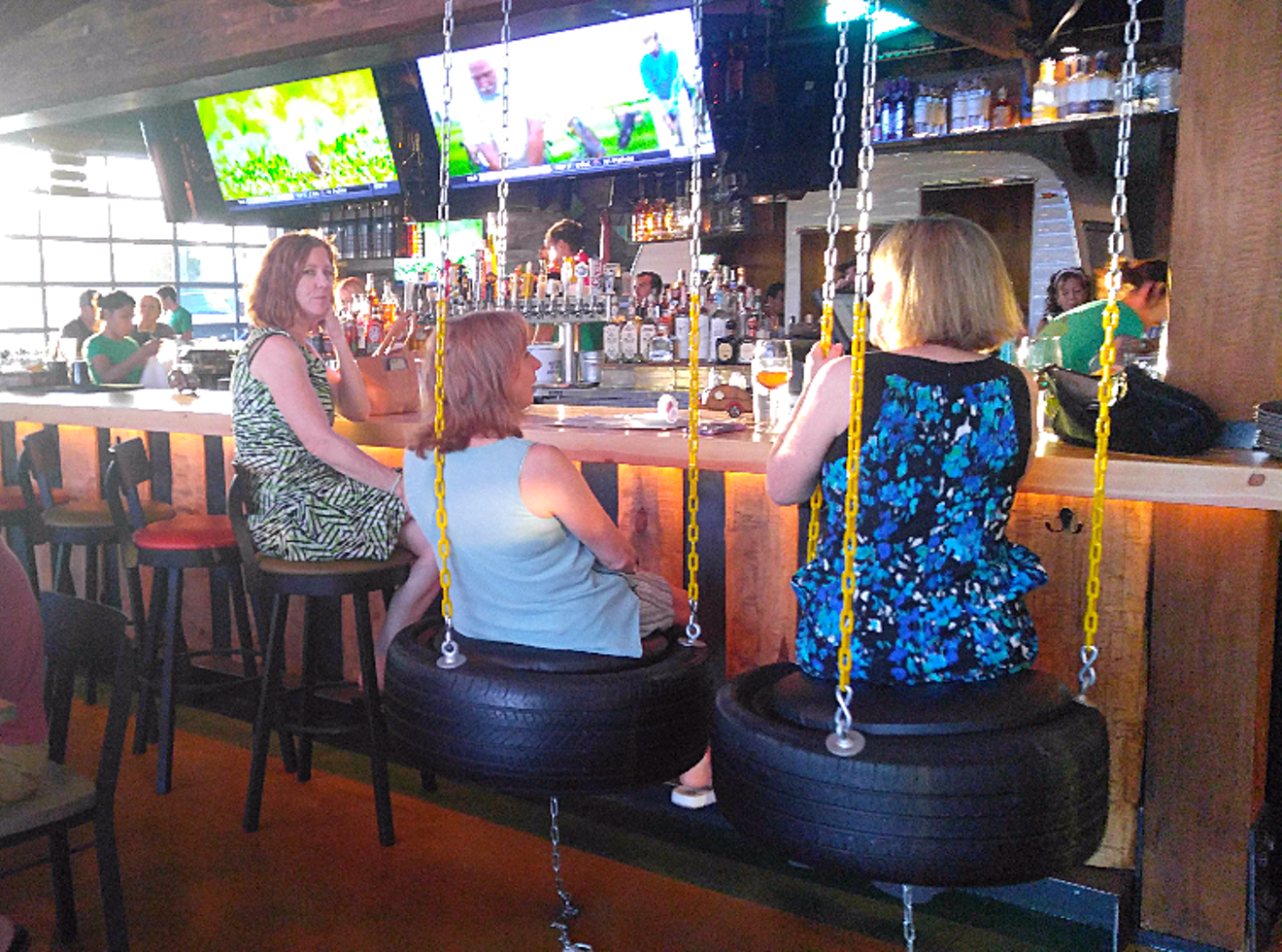 Tire swings by the bar are part of the fun at Camp Social, the latest restaurant to open on Seventh Street in uptown Phoenix. Patricia Escarcega
When a new spot opens in town, we can't wait to check it out — and let you know our initial impressions, share a few photos, and dish about some menu items. First Taste, as the name implies, is not a full-blown review, but instead a peek inside restaurants that have just opened, sampling a few items, and satisfying curiosities (yours and ours).

Even if you hated summer camp as a kid – or if, like me, almost everything you know about sleepaway camp has been gleaned from watching cheesy ‘80s movies – there’s a good chance you’ll get a kick out of Camp Social.

The camp-themed restaurant, one of the newest spots on the Seventh Street restaurant corridor, is located next door to Joe’s Midnight Run. It’s the latest project from Glass Half Full, the Chicago-based group behind last year’s revival of Dos Gringos in Old Town Scottsdale (now called Old Town Gringos).

Glass Half Full is known for its high-concept restaurants, such as The Rabbit Hole in Chicago, a sports bar and restaurant loosely inspired by Alice in Wonderland. For its first original Phoenix concept, the group has created a space and menu designed to evoke fond memories of time spent in the great outdoors.

The dining room at Camp Social features two vintage trailers and two bars.
Patricia Escarcega
The first thing you'll probably notice about Camp Social is that it's cavernous. The restaurant encompasses more than 5,000 square feet, and it feels even more spacious by virtue of high ceilings and lots of natural light. It's notably tricked out with fun details like bar-side tire swings and tree trunk sink vessels in the restrooms.

But before you start exploring the dining room, you’ll have to find the main entrance. Like other uptown restaurants, your Camp Social experience begins at a valet stand – once the valet whisks your car away, you’ll have to walk back toward the street entrance if you want to check in at the host stand. The host stand, by the way, just happens to be located inside a vintage trailer.

Inside, there are two bars, a game room, and a dining room featuring a mix of booths and four-top tables.

You'll spot a second vintage trailer, tucked near the restrooms, which has been re-purposed as a group-friendly booth. If you’re set on dining inside the trailer, be sure to make a reservation ahead of time. Reservations normally require at least five diners, although a server told me that smaller groups are sometimes accommodated on a walk-in basis if you show up during a slow stretch.

Camp Social has a cozy game room with arcade games, Jenga, and a ping-pong table.
Patricia Escarcega
click to enlarge

The unofficial motto at Camp Social: "Camp Hair Don't Care."
Patricia Escarcega
At the rear of the restaurant, you’ll find the cozy game room, complete with fireplace, a ping-pong table, Jenga, and a leather couch for lounging. A chalkboard in the game room captures the restaurant’s laid-back vibe: “Camp Hair Don’t Care.”

There's also a spacious outdoor patio, which is lit up at night by strings of lights and camping lanterns on picnic tables.

The food and drink menu is sprawling, with typical American fare like burgers, sandwiches, salads, and a full pizza menu. There are appetizers and entrees designed to appeal to both grown-up palates (smoked steak tartare) and younger diners (pretzels with cheese).

On the drink side of the menu, you’ll find camp-themed cocktails, including a chocolatey, s’mores-inspired drink that involves a server setting your marshmallows on fire.

If that sounds a little too intense, there’s also the popular Lazy Sunday, a blend of Old Camp whiskey, fresh-brewed tea, lemon, peach, and a splash of Cocchi Americano. It’s easy drinking, a sort of peachy, boozy Arnold Palmer that’s served in a Stanley thermos. One thermos easily serves two or three.

The wood-fired Hobo Stew appetizer at Camp Social is made with elk gravy.
Patricia Escarcega
Many of the food items are wood-fired, including the Hobo Stew appetizer, which a server recommended on my visit. The stew — featuring ground beef in a rich Elk gravy – comes wrapped in tinfoil, and it’s served with a few slices of wood-fired toast on the side.

From the sandwich menu, you’ll find a smoked beef brisket sandwich that’s generously packed with ultra-thin slices of smoky, melty beef, all of it squeezed into a fluffy “tin can roll."

The beef brisket sandwich at Camp Social is served in a "tin can roll."
Patricia Escarcega
click to enlarge

If you have room after elk gravy and alligator sausage, the kitchen makes a pretty mean bread pudding for dessert.

Even if you're not normally a fan of theme restaurants, especially those that lean heavily on novelty, the charms of Camp Social are pretty hard to resist. The space isn't so saturated in woodsy tchotchkes that you'll never want to see another campground again — you might say it's just the right amount of kitsch.

There is a second location of Camp Social already in the works in New Orleans, a restaurant employee told me on my visit. But if you want to explore this campy restaurant (pun totally intended) for yourself, you only have to hike as far as uptown Phoenix.