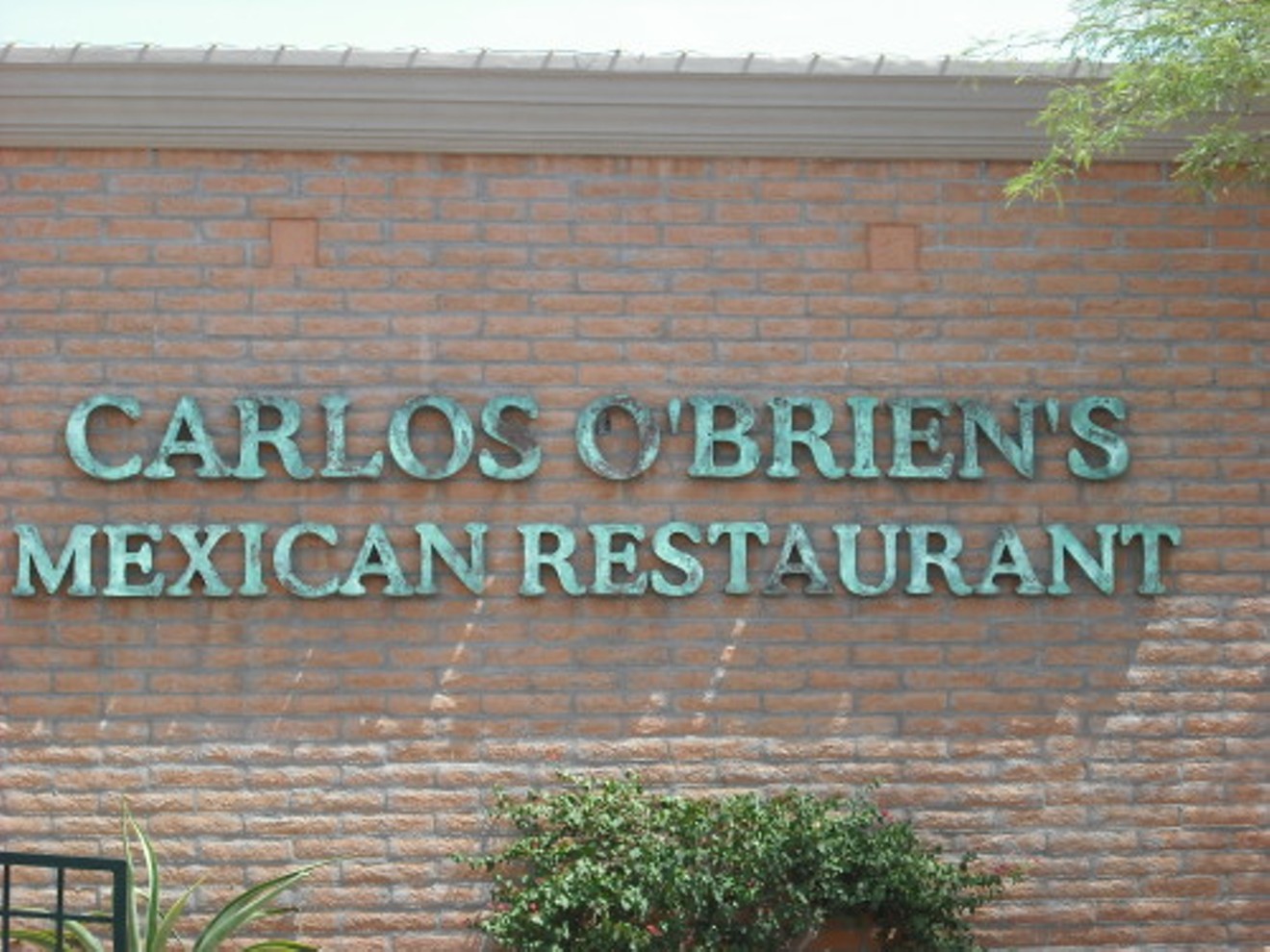 Sure, Carlos O’Brien’s has two other locations. But the 35-year-old Northern Avenue location will be missed. New Times Archives
It happens every time: Someone will mention Pam Larsen, and I start thinking about sour cream enchiladas.

Pam and my husband grew up together, classmates and neighbors in the Biltmore neighborhood. When she visits Phoenix from her home in Wisconsin, I know we’ll be meeting Pam for dinner at Carlos O’Brien’s at 12th Street and Northern Avenue.

Except not any longer, because the 42-year-old local chain closed its Northern Avenue location earlier this month.

“You probably remember that I always just order the cheese crisp,” Pam says when I phone to ask where we’ll eat when she visits. “That’s my thing. You can always judge a good Mexican restaurant by its cheese crisp, and theirs is the best. And the salsa. When I first moved to Wisconsin, I would go to a Mexican restaurant and try the salsa and I’d be like, ‘Oh, you guys don’t even know what this is supposed to taste like.’”

Finding a new spot won't be easy. “I’ve been going to Carlos O’Brien’s since 1978, when it was called Casa Carlos and it was on 16th Street and Bethany [Home Road],” she reminds me. “I still think of it as Casa Carlos.”

The Larsens started eating there every Friday night because it was close to their house. Pretty quickly, they fell in love with the food. When Casa Carlos changed its name and moved to 12th Street and Northern Avenue in 1985, the Larsens followed.

“We’d sit in the corner booth, and we always had the same waitress,” Pam remembers. “Her name was Lupe.”

She recalls that Sean O’Brien, who founded the chain and lived right around the corner from the Larsens, kept a close watch on his waitstaff. “He was really strict about the busboys picking up the dishes right away,” she says. “Were they refilling chips and salsa really fast? He was on them about taking care of customers.”

I call Sean’s son Cory to ask if this is the end of Carlos O’Brien’s customer service, its classic Sonoran fare served in huge portions for low prices. I worry that we’ll be left with chain restaurants and lose those jumbo margaritas and the best pollo fundido I’ve ever eaten.

“Not at all,” Cory assures me. “My dad and my uncle Jeff Lipson were co-owners of this location, and they sold this property. But we’ve still got our other two Carlos O’Brien’s restaurants, one on Happy Valley Road and one in Scottsdale.”

The plan was to find a new, smaller location for the now-closed Northern Avenue store.

“And then in March began the chaos we’re in now,” Cory tells me. “We were still looking at properties when the pandemic kind of kicked into high gear. We’re still keeping it on the table, the idea of a new location. But with things being the way they are, we’ve slowed down our search.”

Cory thinks that even after the pandemic is behind us, people will likely have a different mindset about getting together in a crowded restaurant. In the meantime, he’s doing bang-up takeout business at the other two locations, and he’s noticed customers from the Northern Avenue restaurant coming around.

My friend Pam has been thinking about where she’ll eat when she comes to Phoenix for her niece’s wedding in November.

“When I was home for Christmas, my parents and I went to someplace on Camelback [Road] around 44th Street,” she tells me. “And, you know, it was fine. I guess for me, it almost doesn’t matter where we eat. Carlos O’Brien’s wasn’t really about the food, even as good as the food was. It was about the memories.”
KEEP PHOENIX NEW TIMES FREE... Since we started Phoenix New Times, it has been defined as the free, independent voice of Phoenix, and we'd like to keep it that way. With local media under siege, it's more important than ever for us to rally support behind funding our local journalism. You can help by participating in our "I Support" program, allowing us to keep offering readers access to our incisive coverage of local news, food and culture with no paywalls.
Make a one-time donation today for as little as $1.