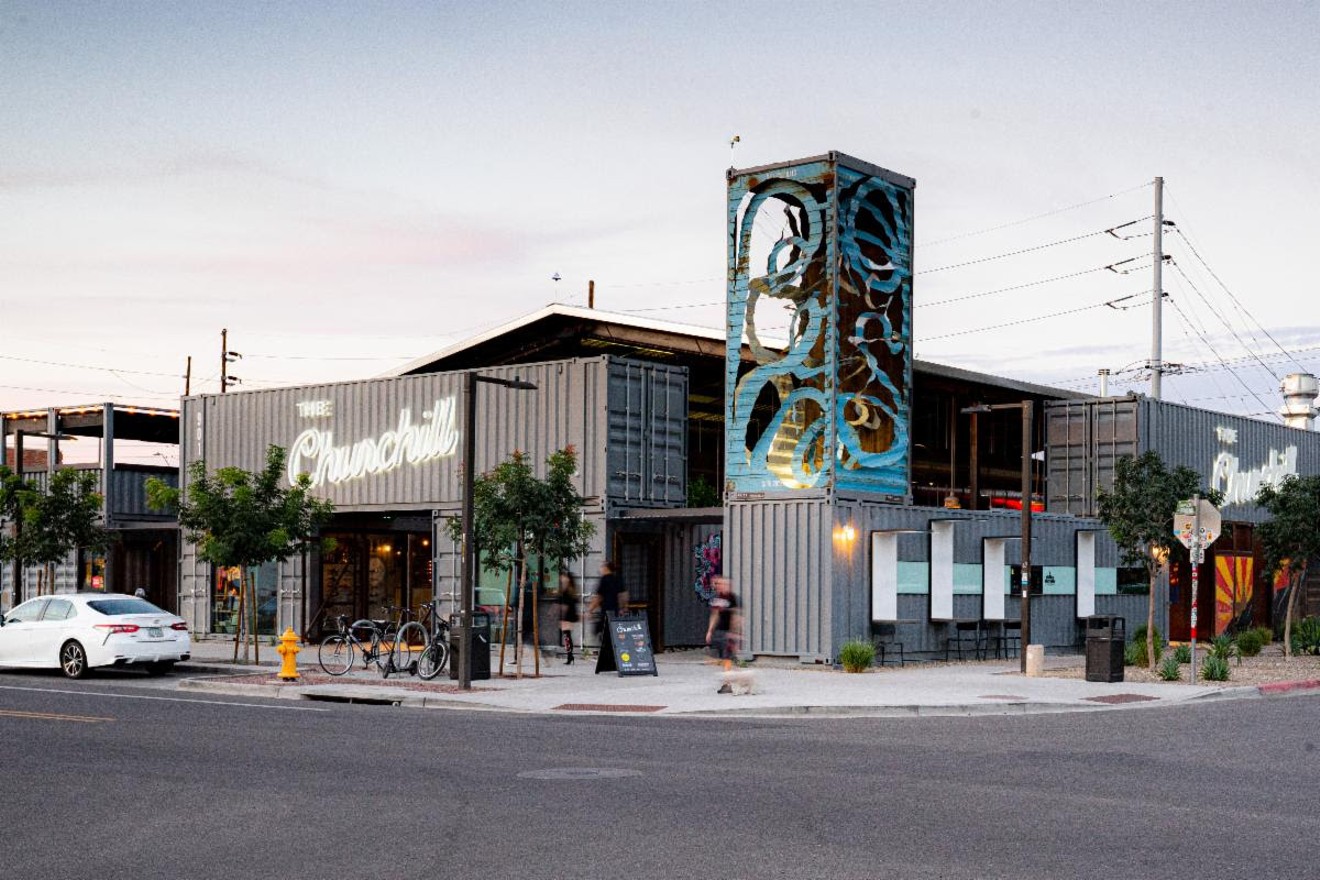 But the well-known hangout spot, which debuted in September of 2018, is undergoing some changes as it embarks on its fifth year in business. Natural wine seller Sauvage Bottle Shop has moved on and Gather PHX, which sells plants and locally-sourced gifts, will move out soon.

When Kell Duncan opened The Churchill with business partner Hartley Rodie in 2018, they hoped to offer an incubator for small businesses who wished to test out their concepts with less of an investment than traditional brick-and-mortar shops.

The businesses were required to sign five year leases to help secure the bank loan. Many of those same businesses are completing their leases in 2023.

Chris Lingua will soon have a lot more space for Sauvage Bottle Shop.
Chris Malloy
Sauvage is the first tenant at The Churchill to grow out of its space into a larger and more fully-fledged business. At the Churchill bottle shop, owner Chris Lingua offered a rotating selection of over 200 natural wines from his miniature space. Wine enthusiasts would stop by to grab some vino on the way home and strike up a conversation with Lingua, who also offered a two or four-bottle monthly wine subscription.

"Two hundred square feet is great but it was never Chris' plan; it was a way to get him in and test his concept," Duncan says. "Chris has the perfect tenant story for us. He used The Churchill as an incubator and is now growing into his own space."


Sauvage will move into the historic Helen Anderson House on McDowell Road in February, according to its Instagram. The charming home most recently held Luana’s Coffee & Beer and before that, HobNobs Food and Spirits, a quaint neighborhood cafe that occupied the space from 2008 to 2019.

Sauvage's last day at its Churchill location was December 31, 2022, and the next tenant wasted no time moving in. Neighbor Market, a gourmet bodega and bottle shop, hosted a soft opening on January 1.

“Processing all the thoughts and emotions from today. Still feels like a dream — can’t believe we got to kick off the first day of the year and day ONE in our shop with all of you. Here’s to the year ahead and all the cozy events still to come,” an Instagram post from the business reads.

Just across the courtyard, Gather PHX will also be replaced. Luxury fragrance brand Cayla Gray first connected with Duncan as a vendor of Sidewalk Saturdays, a weekly market of local artisans that sets up just outside The Churchill. It will move from the sidewalk into its own shipping container on February 1, 2023. Expect to see and smell toxin-free fragrances with names like Water, Petals, and Cozy, in pretty, minimal bottles.

Freak Brothers Pizza slings pies at The Churchill.
The Churchill
Another modification, albeit small, took place in September. Foxy Fruit Acai Bowls partnered with Freak Brothers Pizza and rebranded as Infruition, which still serves brightly colored smoothie bowls and drinks with toppings like sliced strawberries, mangoes, and gooey peanut butter. Freak Brothers Pizza continues to offer piping hot pies made with organic dough from an electric oven that reaches up to 900 degrees.

And while The Brill Line and So Far So Good, the two bars that anchor the space, are now owned by The Churchill, every other concept inside the space has its own tenant.

"We plan to sit down and do a temperature check in February or March to see what the plan for each of these businesses is," Duncan says. "We weren't able to advertise or open up applications for the Sauvage or Gather PHX spaces this time around because they were filled organically, but we hope to do so in the future if other tenants want to leave. There are lots of people who would love to be a part of this space."

The walk-up window at Stoop Kid serves coffee and damn good bagels starting at 8 a.m. daily.
Natasha Yee
If new leases become available in 2023, the terms will be between one to three years to offer prospective businesses more flexibility.

"The goal has always been to focus on small business. As an owner, if you come in and try something and it doesn't work, your life is not over and you don't have to file for bankruptcy," Duncan says.

The collective closed in March 2020 due to the pandemic, reopening in October of the same year. Duncan describes that period as "very touch and go for a while."

He and his management team are excited to be on the other side of the closures and looking ahead in 2023, he says. Phoenicians can expect updated furniture, a refreshed layout, and lots of events in the near future.

"The Churchill is a collection of ideas that we picked up in different cities: London, San Francisco, San Diego. But we've really grown since opening in Phoenix," Duncan says. "We're always working to get better and asking how we can best support the community."

901 North First Street
thechurchillphx.com
KEEP PHOENIX NEW TIMES FREE... Since we started Phoenix New Times, it has been defined as the free, independent voice of Phoenix, and we'd like to keep it that way. With local media under siege, it's more important than ever for us to rally support behind funding our local journalism. You can help by participating in our "I Support" program, allowing us to keep offering readers access to our incisive coverage of local news, food and culture with no paywalls.
Make a one-time donation today for as little as $1.

Natasha Yee is a dining reporter who loves to explore the Valley’s culinary gems. She has covered cannabis for the New Times, politics for Rolling Stone, and health and border issues for Cronkite News in conjunction with Arizona PBS, where she was one of the voices of the podcast CN2Go.
Contact: Natasha Yee
Follow:
Twitter: @natashawrote
Instagram: @natashawrote