For many of us experiencing the Covid age, "fine" feels distant. The strictures and tablecloths and high price tags at deluxe restaurants have started to seem out of step with the moment, almost as if they channel a dusty, textbook era of American eating rather than the masked one we inhabit.

Still, the demand for fine dining hasn't gone away, nor will it. Proof can be found in two new, well-credentialed restaurants I recently visited: one helmed by a pair of longtime restaurant warhorses, the other swinging for the fences in a legendary Arizona hotel.

A “modern Latin” restaurant, Renata’s Hearth feels like one of many flexes for the recently renovated Arizona Biltmore, which Phoenix New Times editor David Hudnall recently described as “maybe the nicest place I have ever been in my life.”

Renata’s has the same grandeur. It has high, lavish ceilings, well-spaced seating with blankets for diners chilly from air conditioning, smooth woods, giant carpets, contemporary art, and groups of diners who seemingly gain their lifeforce from buzz and being seen.

Chef Jesus Figueroa Ortega oversees the kitchen. Previously, Ortega cooked at two similarly high-end establishments, Tarbell’s Restaurant and Cafe Monarch. The predominantly Mexican cooking at Renata’s centers smoke and fire, the flavors of its hearth. It celebrates what many might see as elevation. The pozole costs $26.

Much of the food menu lists small bites meant to sidekick cocktails. Cocktails at Renata’s range from $16 to $22. Somehow, many seem to come from a cocktail cart wedged into a chamber by the host’s stand. This setup is far from ideal for incorporating the loads of ice, garnishes, fresh citrus, tinctures, and elements needed to mix serious drinks. And sure enough, cocktails weren’t great.

A “burnt” paloma using mezcal rather than tequila tasted thin, the three separate smoky elements doing little to improve on the classic. A cocktail built on reposado tequila and ginger, blackberry, lime, and ginger beer couldn’t harmonize these flavors despite their compatibility. For the price of these cocktails, they should be better.

Food tends to be more on point. To start, the Kumai oysters come in a high bowl of ice, the white inner shells and glistening bivalves tinted lime-green by a jalapeno aguachile. Laid with leaf-thin watermelon radish, the oysters slurp cool with a bit of citrus and heat. Charred octopus is another winner. It leans Spanish, highlighted by a crispy-and-soft potatoes and flavorful tomato sauce.

Mains fall into two camps: big shareable plates (which come with tortillas and salsa) and more standard-portioned entrees. The former includes some bangers-on-paper: smoked whole chicken, a seafood-and-chorizo boil, and a wagyu brisket.

If a restaurant menu contains the “w” word, wagyu, the dish better be great. Not good. Not even very good. It needs to be heady, sublime, delicious in a way that makes you feel high. The legend of wagyu, installed into our brains by half-informed word of mouth and late-night food TV, sets a high bar. So does its price.

Renata’s serves wagyu a few ways. One is a 44-ounce Oaxaca-spiced tomahawk that'll run you $144. The other is a $60 smoked wagyu brisket barbacoa. Our metro area has some astounding brisket. Here, you have to deliver, especially on the promise of the “w” word. Despite the smoky emphasis at Renata’s, despite the pedigree of the beef, this brisket is pretty middling. The salsas are nice, sure. The tacos you roll are solid. Still, you want more substance to go with the high style and painful price point.

Renata’s is jaw-droppingly designed and a bonafide scene, if these matter to you. With some adjustments, it also might be a great place to eat and drink.

On the other hand, Character Distinctive Dining, located downtown just north of Roosevelt Row bustle, is already a great place to eat and drink. The restaurant has a formality that recalls past eras of dining. This makes sense, because the eatery, nestled in the stony bones of a century-old house, is run by Peter Kasperski and Richie Moe, a pair etched into Phoenix dining lore.

Kasperski was a force behind gastronomic landmarks like Cowboy Ciao, Kazimierz World Wine Bar, and Sea Saw — now-defunct restaurants that incubated legendary talent and changed the trajectory of Arizona food and drink. Moe was often Kasperski’s mixology captain, known for creativity and funky science in the cocktail area. Kasperski took the wine reigns.

Character is their elegant-yet-no-bullshit re-entry to the dining scene after time away.

You could easily go to Character just to drink. Maybe before a game, before a show, maybe as one stop in a zigzag tour of the downtown beverage scene. As a glass wall showcasing dozens of bottles augurs, a concise wine list reaches deep in space and time.

Despite its old vintages, growers’ Champagnes, somewhat hilarious informal notes and asides, and plucky selections from marginal wine countries like Canada, the best glass I tried was a 2019 natural grenache from Page Springs. It was also one of the most enjoyable Arizona wines I’ve ever tasted.

You could get lost in the possibilities, but don’t. Cocktails warrant attention.

Moe devises cocktails on the ever-changing Character drink list and for Alias, their bar next door that shares the Character kitchen. His cocktail are distinct, hard to trace to the local cocktail family tree and the microtrends of the national cocktail scene. Thoughtful, original, each one seems to have an unexpected element, or many.

A dense, creamy, fat-washed bourbon cocktail laced with flavors like cacao and caramel has a salty foam; it almost looks like a Guinness in a rocks glass. It drinks like some kind of big-chain Frankenstein cold coffee creation, frothy yet showcasing bourbon’s virtues nicely. Another cocktail happily marries gin and breakfast tea by way of lemon oil.

At Character, just about everybody also eats. The food is New American with strong European influences and a roughly equal focus on fish and meat. Like Character’s owners, the chef, Justin Hauska, has a head-turning history, having cooked at Binkley’s and Kai. 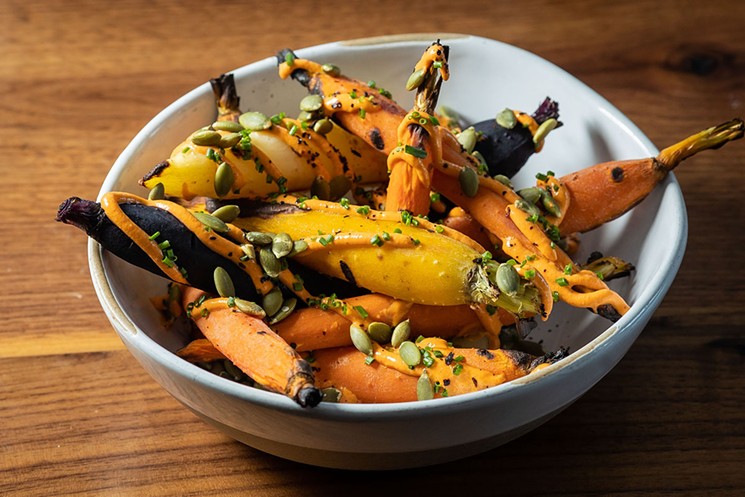 In my experience, food is hit or miss with a high ceiling. A perfectly cooked octopus leg has great range and hits so many beautiful flavor notes, playing the char off against chives, cilantro, and ancho-kissed pineapple. Grilled artichokes are pleasant, but a little smothered by creamy components. Unfortunately, a roasted heirloom carrot side felt flat and uninspired, like it could have come from some workaday fast-casual spot. But deftly cooked sea bass in a delicate broth felt totally inspired and dialed in.

The kitchen might still be revving its engine. Ambitious coursed dinners paired with Moe’s cocktails are slated for the future. Even if Character remains close to as-is, I plan to hang out when drinking downtown, or when craving a bite while on the move from here to there.

Renata’s Hearth
2400 East Missouri Avenue
602-954-2507
Kumiai oysters $22
Octopus a la Veracruz $18
Wagyu Brisket $60
KEEP PHOENIX NEW TIMES FREE... Since we started Phoenix New Times, it has been defined as the free, independent voice of Phoenix, and we'd like to keep it that way. With local media under siege, it's more important than ever for us to rally support behind funding our local journalism. You can help by participating in our "I Support" program, allowing us to keep offering readers access to our incisive coverage of local news, food and culture with no paywalls.
Make a one-time donation today for as little as $1.
Chris Malloy, former food editor and current food critic at Phoenix New Times, has written for various local and national outlets. He has scrubbed pots in a restaurant kitchen, earned graduate credit for a class about cheese, harvested garlic in Le Marche, and rolled pastas like cappellacci stuffed with chicken liver. He writes reviews but also narrative stories on the food world's margins.
Contact: Chris Malloy
Follow:
Twitter: @yollamsirhc
Instagram: @malloy_chris/