Deedra Abboud is a local attorney, community activist, and Arizona Democratic candidate for U.S. Senate. deedra2018.com
Online slurs, threats of protest, and picketers did not stop Democratic U.S. Senate candidate Deedra Abboud from proceeding with a meet-and-greet yesterday at Pomegranate Cafe in Ahwatukee.

Abboud is Muslim, which displeased members of the Fraternal Order of the Alt-Kings of Phoenix, who showed up outside the restaurant to protest.

It all started a few days ago, when Marlene Tolman, the owner of the popular vegan restaurant, posted an announcement on the restaurant's Facebook page about the May 25 brunch hosted by Deedra Abboud, a local attorney, community activist, and 2018 Democratic candidate for U.S. Senate.

"It wasn't about politics," Tolman tells New Times, "it was about community." The restaurant is active with its community engagement endeavors, from a summer shoebox where people can leave sandals and shoes for the homeless, to donations and fundraising for the local high school.

Pomegranate Cafe is a popular Ahwatukee restaurant with a focus on healthy food and community engagement.
Jackie Mercandetti
Shortly after the post went live, "hateful comments" began appearing on the restaurant's Facebook wall and under the event announcement.

Tolman says she and her daughter were disturbed by the messages, and when they couldn't keep up with deleting the comments, they decided to remove the event from their page. They wondered if they should cancel the event as well.

"We decided that everyone has a right to state their position, and at the same time, we have the right to host this event. So, we went ahead with it," Tolman says. "It felt like a form of bullying, which is another reason we decided to go ahead."

Tolman says the protesters from the Fraternal Order of the Alt-Kings of Phoenix (a.k.a. Proud Boys & Stickman Phx) arrived at the restaurant just as the event was beginning. According to the group's website, their aim is “standing up for western ideology and freedom” and “also reclaiming masculinity which is in decline with this modern feminism.”

And as one of the leaders of the group, Based Stickman says via his Facebook page, "You can't coexist with people who want to kill you."

Members of the group and some Ahwatukee residents called for the protest against Abboud on the Deedra 2018 campaign website the day before the event. They claimed, in online comments, that Abboud, a United States citizen and longtime promoter of community inclusiveness and peace, was actually a terrorist.

"Though the Phoenix police were there from the beginning, we decided to allow the 'protesters' to remain on the private property to have their time to 'speak' with their signs and bullhorns for an hour. Their professed agenda, as told to us at the event, is that non-whites and non-Christians do not belong in public office or the U.S. in general," Abboud explained via her Facebook account after the event.

"It just felt like an up-close and personal example of what seems to be going on around our country right now," Tolman says. "It left me feeling so conflicted. Everyone has a right to opinions, but when that opinion is that you want to prevent someone from even speaking to people, which is all Deedra was doing, well, that's just troubling. But even the protesters have the right to their free speech."

The event concluded without any violence, but it left the restaurateur shaken. She says the trolling on social media continued.

"There is just so much misinformation, I see it all the time, but now it is very real and personal for me and my daughter," Tolman says. 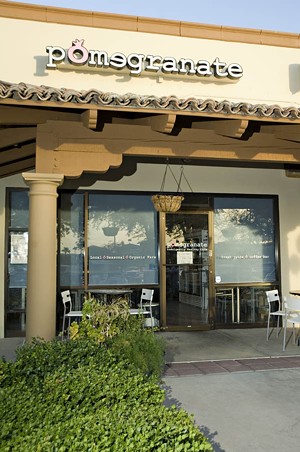 Jackie Mercandetti
Support for the restaurant has soared since news of what happened hit social media.

Millie Ann Scott created a "Support Pomegranate Cafe" Facebook page, and posted: "Deedra Hill Abboud never considered packing it in. She met with her supports as if there was a choir outside singing her praise, instead of what we saw, a vulgar and angry gang of white nationalist. Today we won the battle. Their hate didn't discourage us, it energized us, and reminded us why we started fighting so hard in the first place.

"Because the owner allowed Deedra a space to discuss her vision for Arizona, her business has been targeted by vitriolic attacks. The owner despite being frightened, has stood bravely against the hate for the for the democratic process. A lot of that came because members of STAZ made it their business to go down there and thank them. STAZ is staying neutral in the primary, and didn't encourage their members to go because of Deedra, because honestly this isn't even really about Deedra.

"STAZ and their leadership understands that no matter what your politics or preference in AZ's senatorial contest, most Americans believe a candidate should be accepted or rejected solely on their policies and qualifications, and NEVER their race, religion, sexuality, gender expression, abilities, bank account or place of birth.

"Deedra shouldn't be silenced because of how she dresses, or prays. This affects all of us, not just marginalized communities. Hate is arbitrary. Please let this business know that you stand with places that stand for our civil rights. Take your family and friends there. Bring your candidates and petition drives. Write them on Facebook. Please let them know that no matter your feelings on Deedra's candidacy, you are thankful that they didn't reject her speech based SOLELY on her religion."

As Tolman tries to figure out a positive way forward after this event, her main source of solace is the way in which the community rallied around them in the face of what happened.

"The thing is, if the protesters had wanted to just come in and talk, then that would have gone a long way in eliminating all the fear on both sides. Deedra isn't scary, and, maybe if I had gone out and talked to them, I would have found that the protesters weren't either," she says.

Since the events came to light yesterday afternoon, Pomegranate Cafe's owners report that they have received an outpouring of support, from a surge of new Facebook followers to people coming by the restaurant to thank them. "What I will take away from this is gratitude for the amazing love and support," Tolman says. "It gives us a lot to think about in terms of what else we can do to help strengthen our community and promote open dialogue."