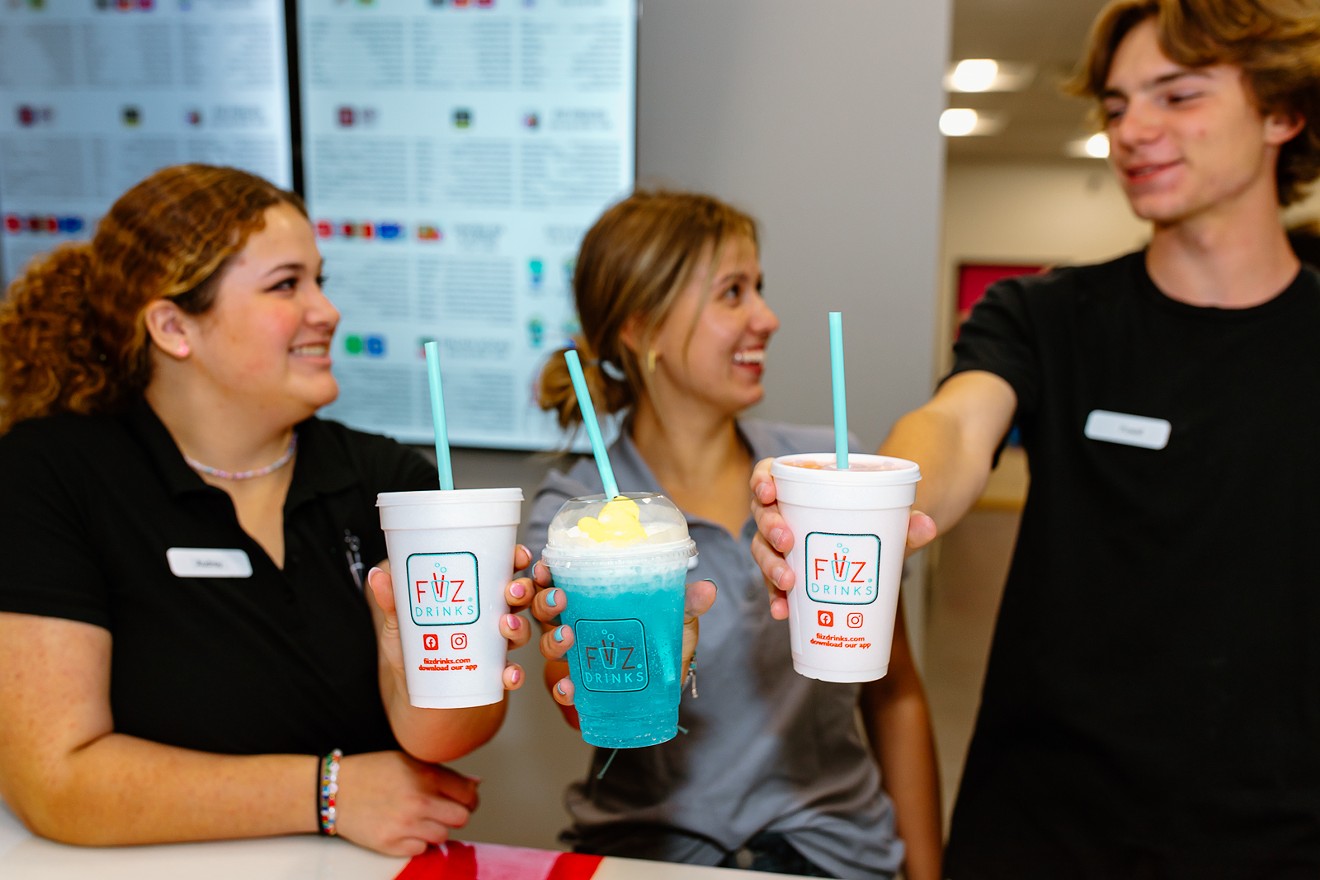 FiiZ Drinks offers 58 flavor syrups to customize your soda. Nikki Michelle Charnstrom
Imagine a world where you could invent your own soda — mixing all of your favorite flavors into a one-of-a-kind refreshment. Now get ready to do exactly that in metro Phoenix. Let your creativity run wild at Mesa’s newest drink destination, FiiZ Drinks.

The Utah-based soda concept got its start in 2014 and now serves 58 syrup flavors and an impressive menu of scientifically crafted drinks. FiiZ offers endless combinations of lemonades, coffees, smoothies, sodas, and energy drinks.

For franchisee and co-owner Jefferey Hogg, the experience is as important as the drinks. He plans to make sure customers find a new drink obsession whether they order at the counter or in the drive-thru.

“Part of the experience is we have a hidden menu that is part of our app, which is really fun,” Hogg says, explaining that app users can also earn loyalty points and order ahead. 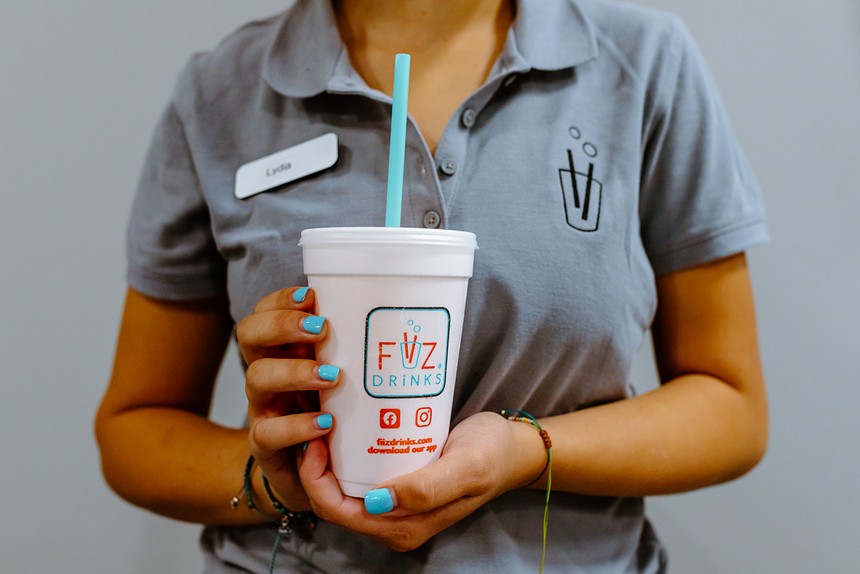 Try one of FiiZ Drinks' signature menu items or create your own.
Nikki Michelle Charnstrom
On a customer's first visit, FiiZ staff ask questions like, "What's your favorite soda?" or "Do you have any go-to flavors?" From there, they recommend a drink from the menu. Don't like the recommendation? Make your own by blending any of the syrups to craft a custom beverage. For those stumped on what to try, Hogg recommends the two most popular drinks — Captain Jack Sparrow and Chandler Bing.

The Captain Jack Sparrow is perfect for rich and creamy cravings. It combines Coca-Cola, coconut, pineapple, raspberry, and cream for a velvety Coke-forward tropical drink that tastes better than any cream soda. The Chandler Bing, named after Matthew Perry’s character from the sitcom Friends, combines Mountain Dew, coconut, pineapple, and strawberry for a light and citrusy refreshment. It tastes like Mountain Dew with a tropical touch and pleasant berry sweetness.

For Arizona State University fanatics, the Sun Devil is a must-try combining Coca-Cola, cinnamon, grenadine, and maraschino cherries — sure to be a local favorite by the name alone.

FiiZ Drinks is no stranger to the Valley, as a former franchisee operated multiple FiiZ stores in the Valley. However, all previous Arizona locations closed in 2019.

Hogg, who was once a loyal customer in Utah, realized he wanted to be a part of the FiiZ family after leaving his 25-year career in corporate finance. Since then, his family has worked to bring FiiZ to the Valley once again, a process that began more than a year ago when they first found the building last March.

“For anybody that’s ever started their own business, it’s a long process. Especially, if you’re dealing with the city and converting a building," he says.

Once a women’s clothing store and dry cleaner, the building required several renovations and permits before it could operate as a food establishment, Hogg says.

FiiZ offers an impressive selection of sodas and light snacks including candy topped kid's drinks.
Nikki Michelle Charnstrom
Now boasting a drive-thru and intimate indoor seating, the building is open and ready for business. In addition to the notable drink menu, they also serve light snacks including popcorn, nachos, and soft pretzels for the perfect salty and sweet pairings.

For the kiddos, they have a special menu of Sprite-based drinks and Italian sodas topped with vibrant candies and fluffy whipped cream.

While this may only be the beginning for the new franchisee, Hogg is determined to make FiiZ an integral part of the Mesa community. He intends to continue expanding the franchise with his family’s help and aims to open multiple locations in Arizona with the second Mesa store opening early next year.

52 South Mesa Drive, Mesa
fiizdrinks.com
Hours: 7:30 a.m. to 10 p.m. Monday to Thursday, 7:30 a.m. to 11 p.m. Friday, 9 a.m. to 10 p.m. Saturday, closed on Sunday.
KEEP PHOENIX NEW TIMES FREE... Since we started Phoenix New Times, it has been defined as the free, independent voice of Phoenix, and we'd like to keep it that way. With local media under siege, it's more important than ever for us to rally support behind funding our local journalism. You can help by participating in our "I Support" program, allowing us to keep offering readers access to our incisive coverage of local news, food and culture with no paywalls.
Make a one-time donation today for as little as $1.