Founder Dean Thomas working with the staff on opening night. Shelby Moore
It’s been eight years since Dean Thomas got the keys, and four years since he signed the lease.

The small spot is located on Monroe Street, just west of Central along the light rail line and just around the corner from Valley Bar.

The staff started prepping Monday to serve no shortage of impatient, cult-status fans of the flaky, meat- and veggie-stuffed pastries that hail from founder Thomas’ native Cornwall, England — and which have made a huge impression in the Valley ever since the first Cornish Pasty opened in Tempe back in 2005.

“The reason it was taking so long to build it is because we kept running out of money,” Thomas says during a quick break amid a dinner rush lasting extra innings, in between teaching green employees to perfectly pack and crimp pasties.

The prep station behind the bar has room for roughly three dozen pasties, which are being made to order. “And we make everything apart from the ketchup, pretty much,” Thomas adds, proud of their independent funding. “There was no real time for training. We just got enough money to get open.”

Upstairs there is a massive bar, plenty of tables, and pool as well. Downstairs from the street level bar and kitchen areas is a lounge area with booth seating and a third bar.
Shelby Moore
It’s a good thing that the new location — the fifth here in the Valley (there are more in Las Vegas, Boston, and, in six weeks, Flagstaff) — has no shortage of seating. This Cornish stacks three stories tall, containing not only an upstairs pub, but a bar, kitchen, and patio at the street level, and an additional bar, kitchen, and lounge in the basement. The space is decorated sparingly, with patterned rugs, signature black-and-white photographs of British coal miners, and the church pew seating where one sits with friends to pray (or is that prey?) on pasties.

Contractor Tim Batte of Mesa’s DNK Enterprises saw the project through. Last night, he sat on the finished patio, eating pasties with his wife.

“There wasn’t really a plan at first,” Batte says about the buildout, which would stop and start every six months or so as money was available. “We just kept adding things.”
click to enlarge 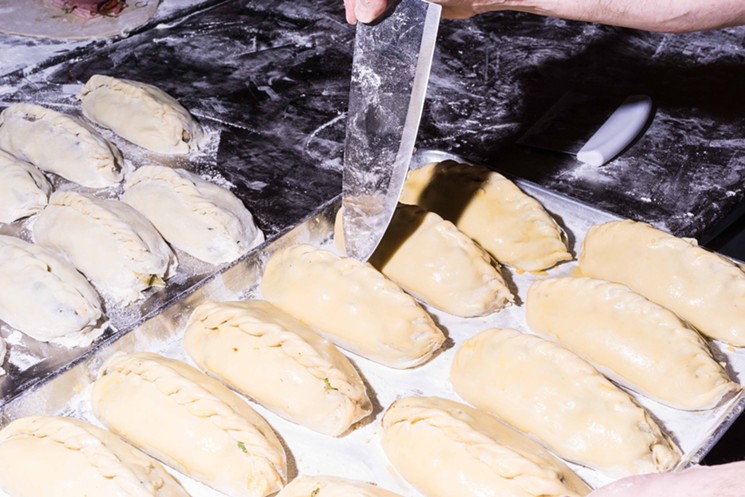 Crimped pasties get a quick poke from the knife so that they don't explode in the oven.
Shelby Moore
click to enlarge

Pasties, fresh from the oven.
Shelby Moore
“This guy built the place,” Thomas says of Batte, checking in to see how the couple were enjoying their food. “And his wife put up with it.”

“It’s very pubby. Very English,” says Simon, who was born in Scotland and worked in London before relocating to Phoenix. “I’m very happy. This is going to be a great addition to downtown … And they make everything from scratch. They really care about what they’re doing.”

"I grew up on pasties," Thomas says. "They’re as common as tacos are here. As common as Subways — or not Subways but, you know, sandwiches ... Well, Subways too."

Steak, potatoes, onions, and rutabaga (that's the menu's Oggie). Cheese and onion. His mom would make them on a Tuesday night. His granny would make them on a Friday night. And each day at school, a pasty van could be counted on to arrive at lunch time. If you’re keeping track, that’s about seven pasties a week.

The downtown Phoenix location will be open seven days a week, from 10:30 a.m. until 2 a.m, at 7 West Monroe Street.