Find the Best Falafel in Phoenix at These 7 Restaurants 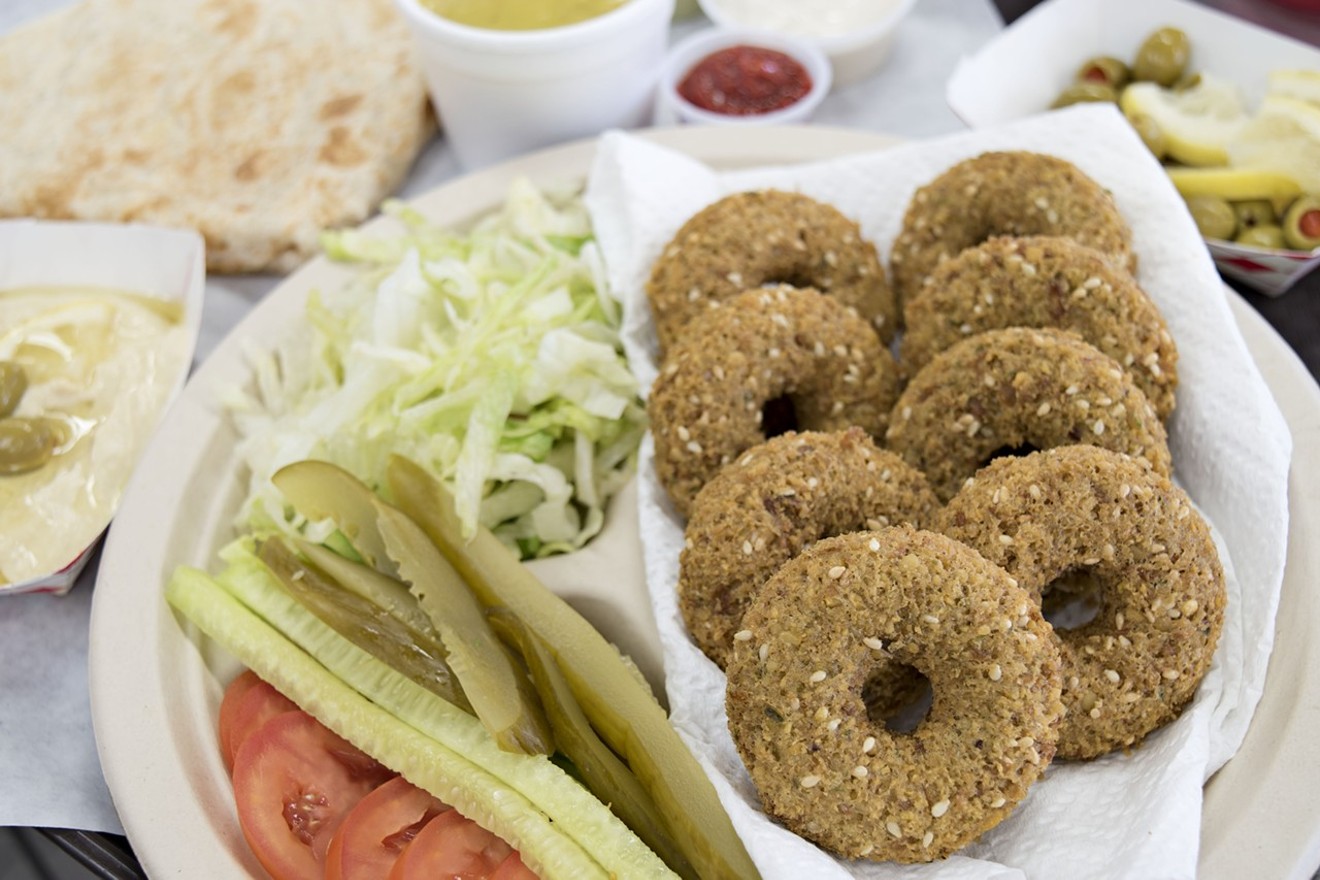 A spread from Casa De Falafel. Jackie Mercandetti Photo
Falafel is a traditional chickpea-based dish that most experts agree was invented over 1,000 years ago in Egypt. It then spread throughout the Middle East and Mediterranean countries, becoming a staple.

Most Greek and Middle Eastern restaurants in the Valley offer versions of falafel, but this list is for fans looking for the satisfying mix of nicely seasoned chickpea balls that are crispy and fried on the outside, soft and moist inside, and wrapped in a soft and preferably house-made pita. Tahini, a sesame-based sauce, is a must, and good fries, Israeli salad, or hearty rice pilaf on the side are a bonus. 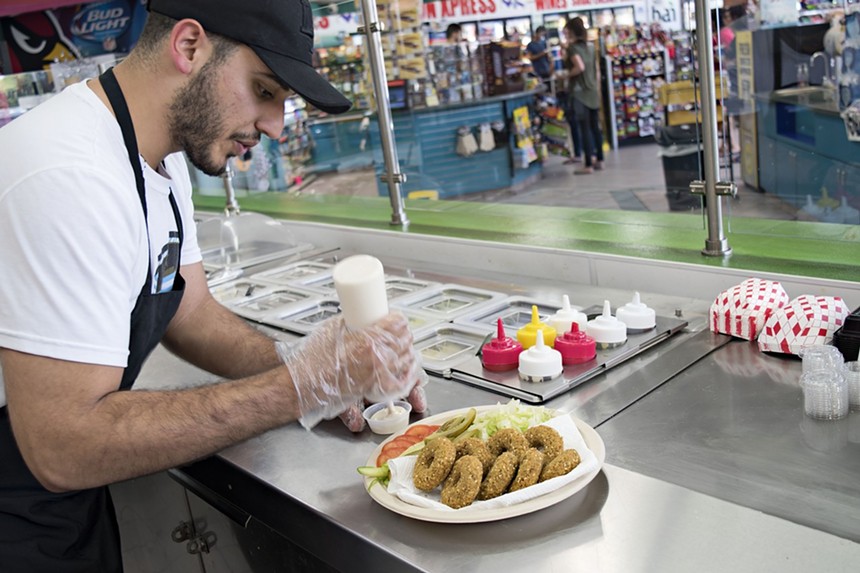 4920 West Thunderbird Road, #119, Glendale
623-230-2920
While falafel is traditionally served in round balls, at Casa De Falafel in Glendale, expect to see donut-shaped rounds instead. For $15.90, guests are served a platter of six crispy falafel rings with hummus, a simple salad of lettuce, tomato, and onion, a pickle, and a four-ounce cup of lentil soup. Sauces include the traditional tahini and amba, which is a mango pickle sauce. Optional hot sauces add some spice and include a red medium sauce or a "super spicy" green sauce. Want to try the falafel only? They are 95 cents each. Try adding some to a different meal if they are an unfamiliar experience. Other ways to enjoy falafel here include a falafel sandwich, falafel tacos, and a falafel burger.

4747 East Bell Road
602-493-4831
While it looks small on the outside, this cozy restaurant is surprisingly spacious and aesthetic inside, with charming dim lighting and retro vinyl booths. Around since the 1990s and started by an Iraqi family with a passion for Greek food, Saba's Mediterranean Kitchen is a local gem. The restaurant offers an extensive menu of Mediterranean dishes including spit-roasted shawarma, lamb gyro, excellent feta fries, and outstanding falafel options. Try the falafel appetizer with four falafel balls for around $9 or a falafel pita sandwich with lettuce, tomato, and tahini. Add hummus for a small upcharge to complete the Israeli-style experience. For those that have a bigger appetite or want to share a dish, get the hand-crafted falafel burger with a generous patty, hummus, and a burger bun with sides of lettuce and tomato and a choice of fries, salad, or soup for $13.75. The falafel burger is definitely the star here as well as the feta fries — crispy Greek-inspired french fries with feta cheese, oregano, and lemon. For those with a sweet tooth, plan on saving room for either the traditional flaky and honey-laced baklava or the spongy and light tiramisu. 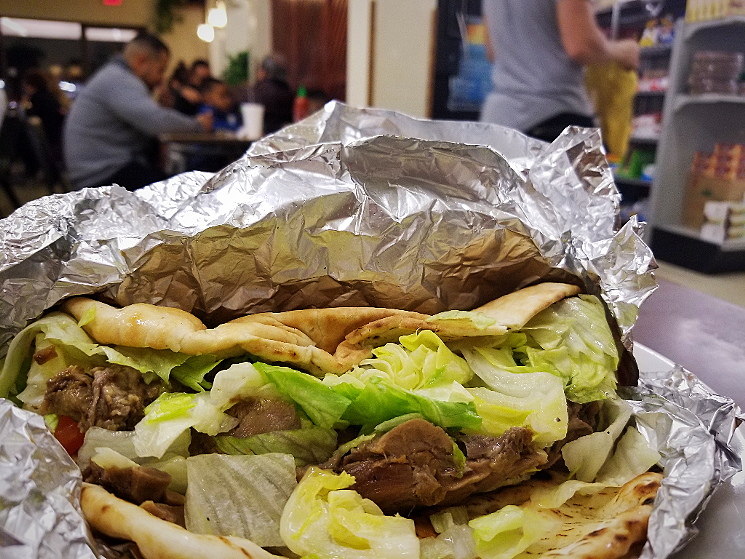 The lamb tongue sandwich at Haji-Baba in Tempe.
Patricia Escarcega

1513 East Apache Boulevard, Tempe
480-894-1905
Established in 1984, Haji-Baba is one of the oldest standing Mediterranean restaurants in the Valley. Its multi-concept space includes a simple and classic deli-style counter inside of a grocery store along with a dine-in restaurant. Haji-Baba serves many popular Middle Eastern dishes with slight variations in spellings and spices on the menu.  Get a traditional "falafil" for only $5. Pair your lunch with pomegranate juice or yogurt soda, finish off with a traditional nut-filled Baklava for dessert, and pick up some spices, cheeses, and olives to take home at this one-stop shop in Tempe. 7116 East Mercer Lane, Scottsdale
480-687-2243
One of the newest restaurants on the list, Fata Morgana opened in January 2022 and shares a taste of Israel in its signature dishes. Try Israeli street food staples like sabich, an eggplant-based vegetarian pita sandwich ($11.95), chicken or corn-based breaded and fried schnitzel ($14-18), or a traditional falafel plate with six rolled balls and tahini for $9.95. A classic falafel sandwich comes with all the fixings and a side of crispy fries for $9.95. This is a kosher-friendly option as well. Owned by a duo from Israel and Canada, this cozy restaurant has carved out a spot for Israeli offerings.

1021 North Scottsdale Road, Scottsdale
480-284-6001
Kosher go-to Kitchen18 has a wide-ranging menu that includes falafel, sushi, Chinese-inspired dishes, Mediterranean staples like baba ghanoush or smoked eggplant dip, tasty pita, and hummus. Try the falafel platter with hummus, pita, and Israeli salad for $13, or the sampler that includes other classics like tabbouleh and baba ghanoush for $15. Kitchen18 is also an excellent option for catering events such as Hanukkah parties.

14884 North Pima Road, Scottsdale
480-991-2022
De Babel serves a twist on the traditional falafel sandwich ($8),  topping it with cucumber and turnips along with tahini, tomato, and lemon zest.  The Scottsdale restaurant has a varied menu with many types of Middle Eastern meats, a Wagyu beef burger for $14, and vegetarian options including a fried cauliflower pita sandwich ($8.50). Try the unique mint-laced, grilled Halloumi cheese, a mix of sheep and goat milk from Cyprus  ($11). De Babel is a destination for hard-to-find dishes from Lebanon, Turkey, and Syria and also serves pita bread flown in from New York, and crispy, hand-cut fries. The thought and skill put into each dish is clear at this stand-out spot. 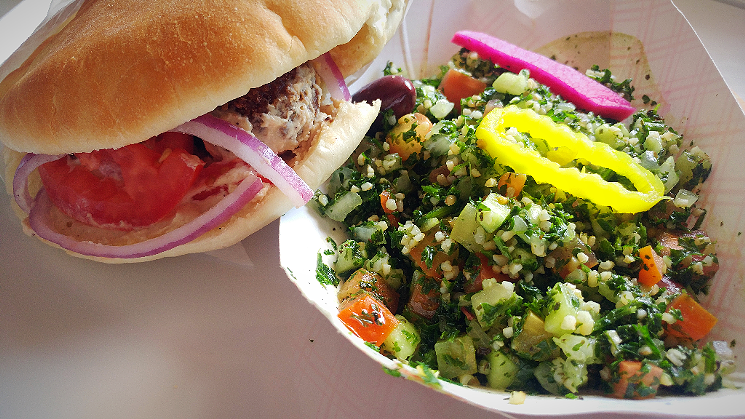 3052 North 16th Street
602-277-4927
A Lebanese family-owned local business, the Middle Eastern Bakery & Deli in Phoenix has a wide variety of offerings including falafel and house-made pita bread. The vibe is all no-frills and cafeteria-style, but the fragrant smells of spices emanating from the kitchen can't be beaten. With the lowest prices of the bunch, coming in at $3 for five falafel balls with hummus and pita, or $5 for a 10-piece, the Middle Eastern Bakery & Deli is the perfect spot to get a taste of Lebanon without breaking the bank. A full falafel plate of 10 balls with a choice of Greek salad or tabouli salad is $8. Tabouli salad is a traditional Mediterranean dish featuring very finely chopped herbs and vegetables with bulgar wheat and citrus and olive oil dressing.

KEEP PHOENIX NEW TIMES FREE... Since we started Phoenix New Times, it has been defined as the free, independent voice of Phoenix, and we'd like to keep it that way. With local media under siege, it's more important than ever for us to rally support behind funding our local journalism. You can help by participating in our "I Support" program, allowing us to keep offering readers access to our incisive coverage of local news, food and culture with no paywalls.
Make a one-time donation today for as little as $1.
Melissa Parker is a freelance writer for the Phoenix New Times. Originally from New York, she has strong opinions on pizza and deeply appreciates Arizona's abundance of tacos. She primarily writes food articles and specializes in local restaurants and breweries.
Contact: Melissa Parker