First Look: Spooky's Swirls Is a Bakery With Lots of Horrors but No Gluten 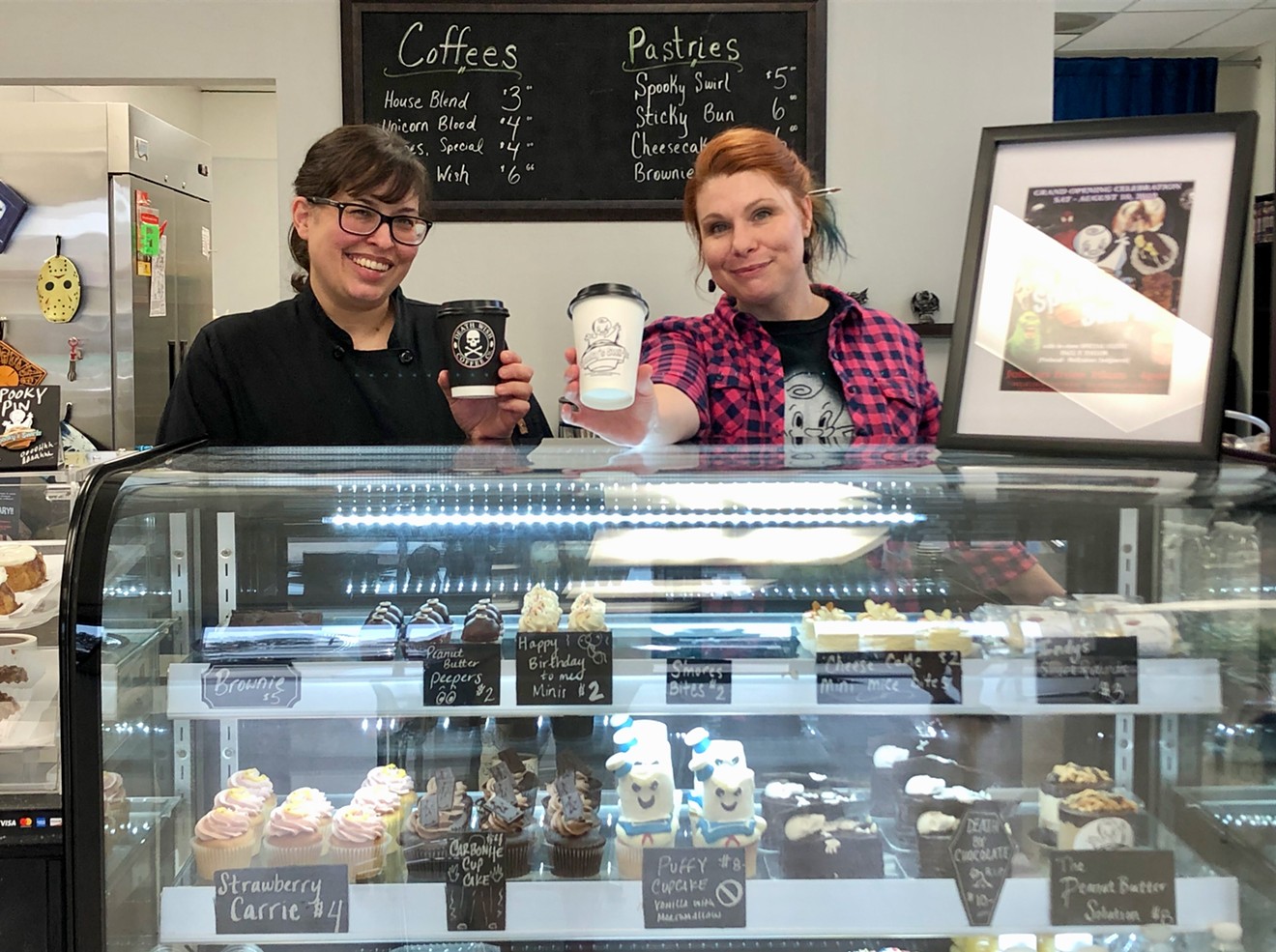 Chefs Chris Szydlowski and Lola Forbes, the magic team behind Spooky's Swirls. Lauren Cusimano
Opening a niche restaurant is risky, sure. But what about covering two niches? It still doesn’t seem to be a problem at Spooky's Swirls, a new horror-themed, 100-percent gluten-free bakery in Chandler. Open since July 3, the spot is like a Hard Rock Café for horror fans, and a saving grace for sweets fans with celiac sensitivity.

Spooky’s occupies a suite at the Paseo Del Oro shopping plaza in Chandler near the Mesa border at Alma School and Elliot roads. Outside, the bakery appears unassuming, just another shop in a strip mall also occupied by a Zia Records and some churches.

But inside, Spooky's Swirls is a sensory overload. The bakery is bright, and at all times has a movie going on the dining room flatscreen. You want to cut for the counter, spotting some amazing cupcakes, but the almost-hidden nook of horror movie memorabilia peeking around the corner also catches your attention. Then you notice the larger-than-life Slimer to your right, and maybe an empty table you can snag to your left. 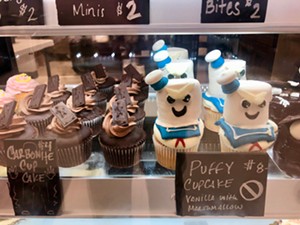 Star Wars: Return of the Jedi and Ghostbusters-themed cupcakes in the display case.
Lauren Cusimano
In the dessert display case by the cash register, customers will find rotating options of pop culture-themed cupcakes. The Stay Puft Marshmallow Man cupcake is done well, the Bride of Frankenstein cupcakes were a hit, and the Stranger Things’ Demogorgon cupcakes have been the best sellers so far.

There’s also the Strawberry Carrie, all light pink like Sissy Spacek’s homemade gown, complete with crown. But when you bite in, the middle is “blood filled" — i.e., some runny, house-made strawberry jam nodding with every bite to genre giant Stephen King. On the neighboring shelf there’re knife-shaped Rice Krispies Treats, called Serial Killer Bars (or knife Krispies treats, just saying). What’s more, Spooky’s offers Death Wish Coffee, which is about 200 percent stronger than an average cup of coffee, as well as breakfast sandwiches.

But in that back nook, a small horror museum waits for everyone from novice to ultimate fans. It’s a rotating exhibit of items from the Horror & SciFi Prop Preservation Association, an Arizona-based, nonprofit organization preserving some niche film memorabilia known as HSPPA. Items range from screen-used props to wardrobe pieces and collector pieces. 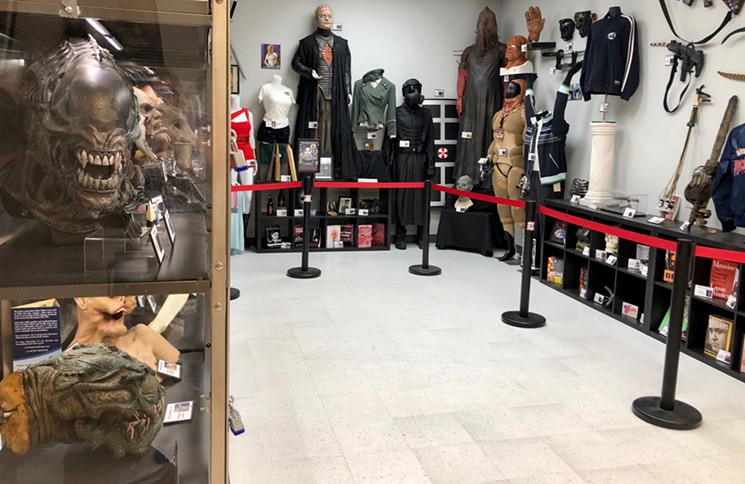 The small horror museum inside is a rotating exhibit of items from the Horror & SciFi Prop Preservation Association.
Lauren Cusimano
During our visit, the museum held a production-used Bruce Wayne business card from 1989's Batman (in other words, handled by Michael Keaton) and handgun props from Batman Returns. There was a replica Wyld Stallyns hat, signed by Alex Winter and Keanu Reeves, from Bill & Ted’s Bogus Journey. There were also masks from Army of Darkness, Jason X, Total Recall — we could go on.

Four people, all of whom are co-owners, oversee Spooky’s Swirls.

James Azrael is the founder and head curator of the prop preservation association and Ernesto Avina has been with the association since its establishment in 2015.

The two female chefs, Chris Szydlowski and Lola Forbes, make this a magic team. Szydlowski has more than 20 years experience in kitchens from Dallas to New York, New Jersey, Chicago, and Phoenix. Forbes graduated from Le Cordon Bleu, and her father was an Air Force chef. She grew up making cinnamon buns and bear claws for the whole neighborhood.

Primarily, Forbes is the baker and Szydlowski is the decorator. “I can make cupcakes all day,” Forbes says. “And then she turns them into monsters.”

Slimer has become a popular selfie spot.
Lauren Cusimano
So how did pastries and props come together on such a partnership?

Szydlowski and Forbes have been working together for years after meeting at Whole Foods. Last year, they attended the Mad Monster Party, known as Arizona’s horror convention, where Azrael was manning a booth representing the prop preservation association. The two became interested in the association, and showed up to a meeting with a dozen Friday the 13th desserts — more specifically, Jason mask-topped cupcakes. Soon everyone got to talking.

Roughly three weeks in, Forbes and Szydlowski say they’ve blown their business plan out of the water. They’ve already had to hire staff, already had to upgrade equipment, already sold out one Saturday. “We didn’t know people were going to be into gluten-free and horror ... it’s two niches … but they are,” Forbes says.

The two say the gluten-free community is pushing the bakery pretty heavily online. “They’re doing our marketing for us because we’re found to be celiac-safe, although we’re not certified,” Szydlowski says, though Spooky’s is a 100-percent gluten-free kitchen and dining facility.

Forbes says she loves giving kids with celiac sensitivity their first cinnamon bun, or birthday cake. It’s what makes this the most rewarding for her. And on top of this experience, they try to keep prices low despite using high-quality ingredients.

“We’re not trying to rake people across the coals because they have an allergy,” Forbes says, Szydlowski nodding in agreement.

Masks used in the movies.
Lauren Cusimano
That’s not to say Spooky’s isn’t squarely on the horror community’s radar.

Even in their second week, the person running the production company behind The Conjuring Universe brought Annabelle — that terrifying little girl doll from the film series — in for a quick visit. She is one of seven that was replicated from the original doll.

During the visit, Annabelle took some photos with a carrot cupcake, in case you were curious. “We were out of kids' souls,” Forbes says. “So we gave her a cupcake to keep her busy.”

Spooky’s Swirls.
3029 North Alma School Road, #117, Chandler; 707-776-6597.
Hours: 8 a.m. to 2 p.m. Wednesday to Friday; 9 a.m. to 1 p.m. Saturday and Sunday.
KEEP PHOENIX NEW TIMES FREE... Since we started Phoenix New Times, it has been defined as the free, independent voice of Phoenix, and we'd like to keep it that way. With local media under siege, it's more important than ever for us to rally support behind funding our local journalism. You can help by participating in our "I Support" program, allowing us to keep offering readers access to our incisive coverage of local news, food and culture with no paywalls.
Make a one-time donation today for as little as $1.