The crispy drums and flats at Long Wong's Hot Wings are now easier to get in the west Valley after the opening of a new restaurant at 83rd Avenue and Thunderbird Road in Peoria. In addition to traditional and boneless wings, Long Wong’s rounds out its menu with a variety of pizza, burgers, hot dogs, sandwiches, salads, and smaller bites.

Ola Elzaharna co-owns the franchise with her brother, Mohammed. Her other brother, Sam Elzaharna, has owned and operated the Long Wong’s Hot Wings restaurant at 43rd Avenue and Indian School Road for several years.

“My youngest brother, Sam, he’s our advisor,” Elzaharna says. “He’s been in the business since 1990.”

Originally from Qatar, this is Elzaharna’s first attempt at running a restaurant. She has a bachelor’s degree in chemistry, and is a former office manager for the Minister of Information and Communication Technology in Qatar. Her brother and partner, Mohammed, is a consultant for an IT department in Qatar. 
“He oversees his consultation business,” Elzaharna says. “That’s why you can’t find him here.”

To compensate, Elzaharna gets occasional assistance at the restaurant from her children, Fawzi, Mohammed and Aya El Ashy. On this Wednesday afternoon, her son Mohammed – an economy major at Arizona State University with a 3.8 GPA – was helping in the kitchen, grilling cheeseburgers and frying up baskets of crispy wings.

Elzaharna says the bone-in wings are the most popular item on the menu. They’re served with celery, carrot sticks and ranch dressing in quantities of six, 12 and 20. Boneless wings come in eight-, 12- and 20-piece assortments.

“Our wings taste much better [than the competition],” Elzaharna says. “The kind of wings that we buy and the sauce that we make is all fresh. We prepare our wings on the day we make them. We don’t keep anything in the freezer or the fridge. We make them fresh on a daily basis.” 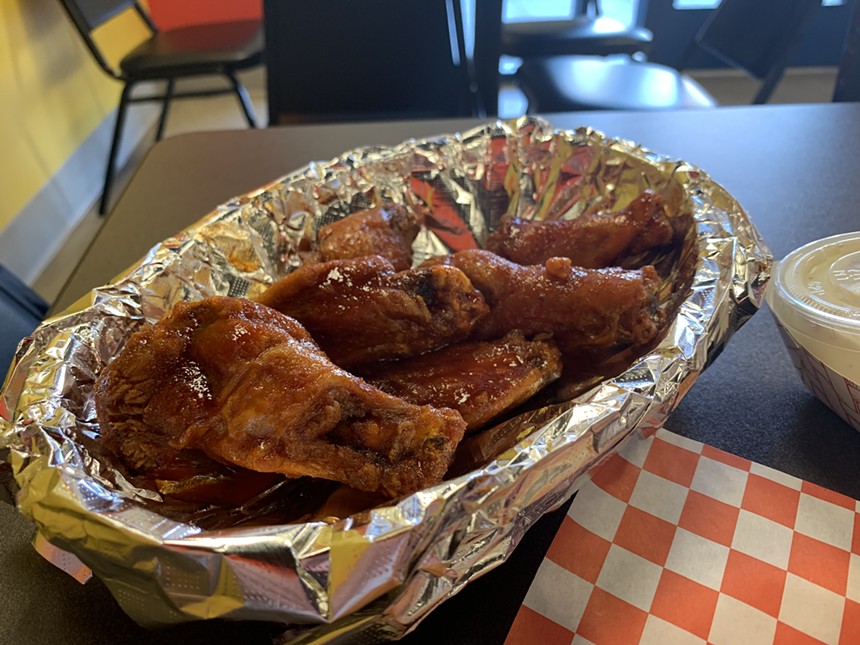 She continues: “You can tell our wings are really huge. Our customers love the crispness. They love to hear the crunch. They are crispy outside, and juicy and meaty on the inside."

Long Wong’s Hot Wings offers about 15 dipping sauces. A few of the top dippers are medium, hot, suicide and zombie. Zombie is the hottest, says Elzaharna, adding that all the sauces are equally popular.

Elzaharna says the Wings Wednesday special has been a best seller. On Wednesdays, customers can get 12 traditional or boneless wings in their choice of dipping sauce for $9.99. Words of encouragement from loyal customers.
Kevin Burton
KEEP PHOENIX NEW TIMES FREE... Since we started Phoenix New Times, it has been defined as the free, independent voice of Phoenix, and we'd like to keep it that way. With local media under siege, it's more important than ever for us to rally support behind funding our local journalism. You can help by participating in our "I Support" program, allowing us to keep offering readers access to our incisive coverage of local news, food and culture with no paywalls.
Make a one-time donation today for as little as $1.