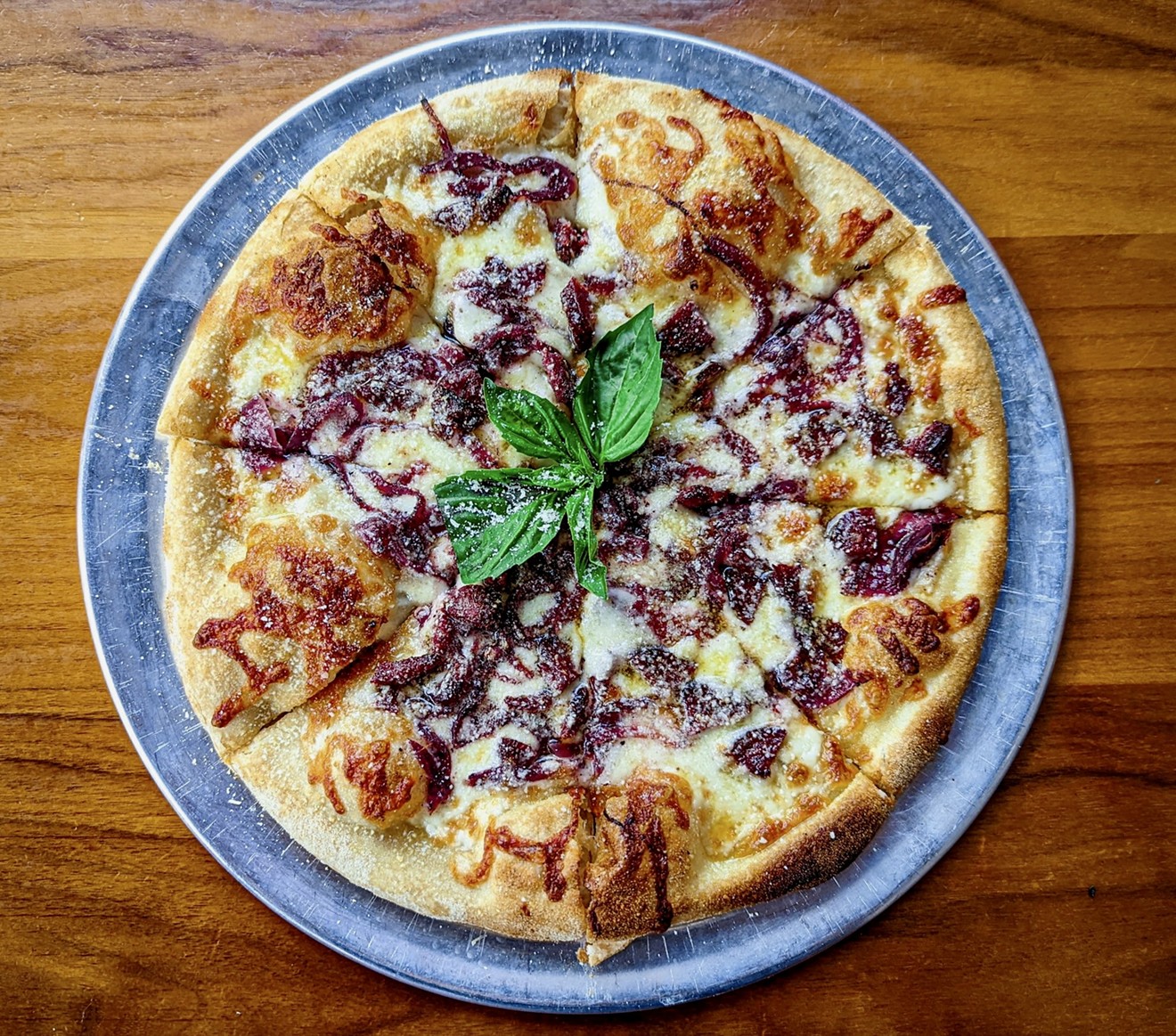 NY-style pies dominate the new food menu at Bitter & Twisted. Bitter & Twisted
The best way to describe Gemini Pizza, the new incubator restaurant at downtown Phoenix cocktail bar Bitter & Twisted, is by stating what it’s not. For starters, Gemini — created by chef Racan Alhoch, owner of Saint Pasta — is not pasta. You won't find a single rigatoni on the 13-item menu. It’s not try-hard food, either, with wordy menu descriptions that require a dictionary or a food snob to translate. It’s also not your typical highbrow cocktail bar fare, crafty finger foods that take a back seat to crafty cocktails.

So what is it? It’s a neighborhood pizza joint, yes, but it’s also Alhoch on a plate, a straight shooter who knows himself and where he came from — namely, New Jersey by way of Syrian immigrant parents.

“Because my parents are Syrian immigrants, food was a really important tool for them to help my siblings and I remain close to our culture,” says Alhoch. “On the other hand, I was born and raised in New Jersey, so I was constantly steeped in American Italian food because it’s so ubiquitous. So I think the inspiration comes from wanting to bridge the gap between my two identities as a third-culture kid.”
click to enlarge 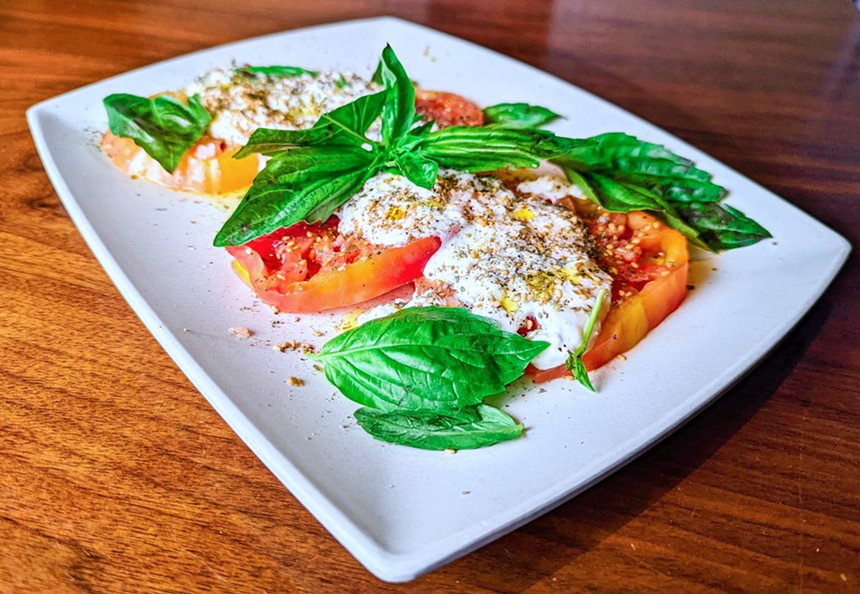 The result of that inspiration is first and foremost pizza, the ultimate vehicle of taste and texture that simultaneously delivers culture and comfort. Alhoch’s menu features five New York-style pies. All start with two-day proofed dough made with local Hayden Mills flour and finish with toppers like garlic, basil, ricotta, and spicy sausage; there's even a vodka pizza with Saint Pasta's famous vodka sauce. It all goes into a deck oven and comes out as the New York-style pizza Alhoch ate growing up.

“New York style to me is a crispy yet pliable thin-crust pizza with a slightly puffed crust that's topped with uncooked tomatoes, low-moisture mozzarella, and cooked at a lower temp for a longer period than Neapolitan-style pizza,” says Alhoch, who didn't even know other types of pizza existed until he was in his late teens and working at a pizzeria.

The first question here: Does Phoenix even need another pizza place? The easy answer is that you can never have too many slice options, but it’s more than that. Alhoch isn't trying to reinvent, reimagine, or elevate pizza — or make it anything it’s not. He just wants to give you the good stuff, re-create what he loved as a kid. “Phoenix needs another pizza option because there are more Domino's than Biancos,” says the chef. “Jokes aside, Phoenix needs more of literally every type of cuisine. Competition breeds quality. I want Phoenix to become a food battle dome where only the best survive.” 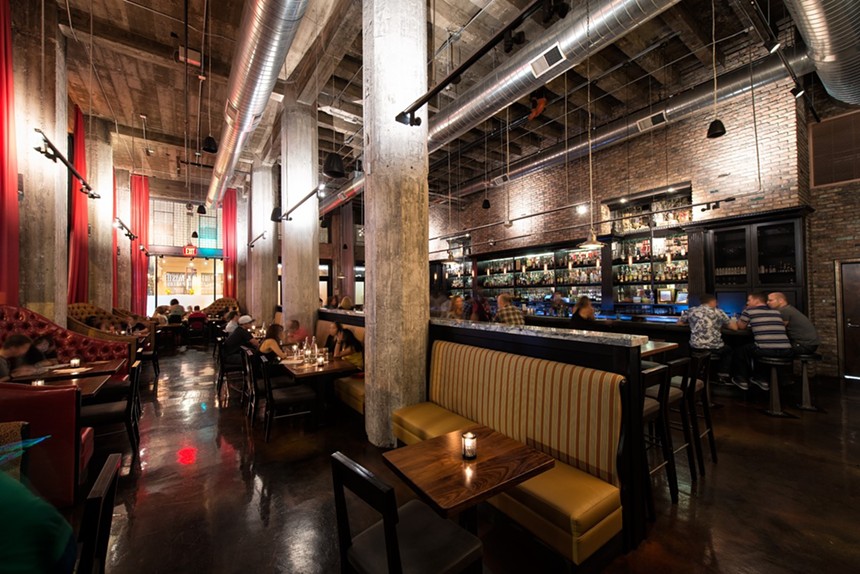 A neighborhood pizza joint in a cocktail bar makes total sense at Bitter & Twisted.
Bitter & Twisted
The second question: What’s a pizza joint doing in an upscale cocktail bar? The pairing may seem like the Jersey Shore landed on the Vegas strip, but Bitter & Twisted owner Ross Simon has long been a fan of Alhoch, and the admiration is mutual. “I remember during the pandemic, Bitter & Twisted did to-go cocktails, but they weren’t just your regular to-go cocktails,” says Alhoch, who was impressed with Simon’s attention to detail. “They came with a paper explaining the drink and a stir stick.” So when Simon reached out to Alhoch to be a kitchen partner, he gave him carte blanche, with one stipulation: Keep Bitter & Twisted’s signature Hurricane Popcorn on the menu.

Like the pizza and popcorn, the rest of the menu is straightforward yet sublime: snacks that invite finger-licking, such as sumac-and-garlic-marinated chicken wings with housemade bleu cheese dressing; straight-up salads like fattoush and Caesar; and a single dessert, a simple sweet that combines tea biscuits and chocolate with shredded coconut and pistachios.

“When it comes to cooking, I like simplicity instead of flexing,” says Alhoch. “Syrian food, like Italian food, is so simple and delicious, so I think being a Syrian born and raised in New Jersey means I've absorbed the philosophy of simplicity through osmosis.”

He comes by that osmosis honestly. Alhoch grew up in a home obsessed with food, his mother being his biggest influence. “When I was a little kid, I would climb on a step stool while she was cooking and just watch her the entire time,” he remembers. “Her father was a well-known restaurateur in Damascus. Even though he’s long since passed, some of the restaurants he started in the ’50s and ’60s are still open and popular, so my mom has some serious cooking chops.” 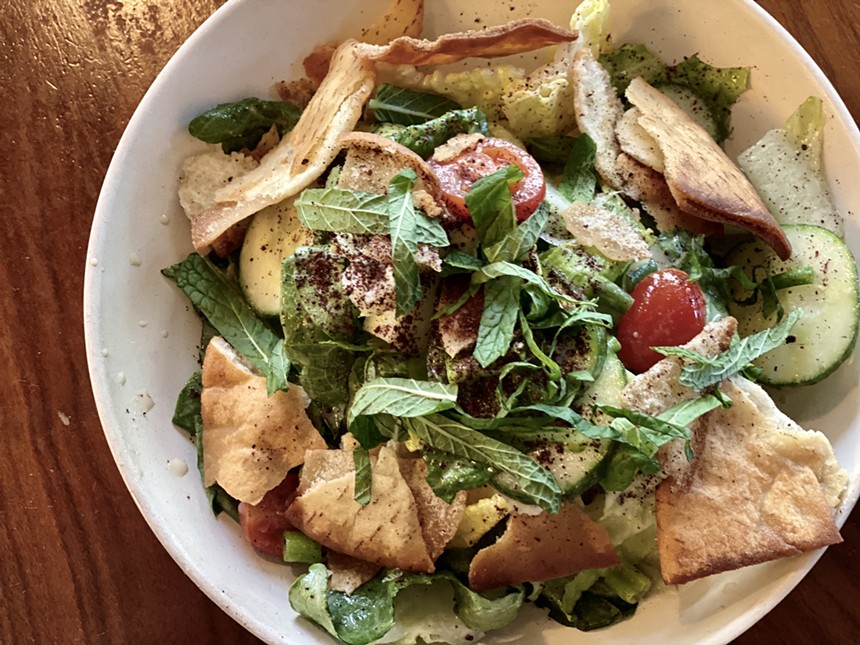 Alhoch’s take on this Middle Eastern salad with fresh mint and fried pita bread is totally vegan.
Allison Young
Just don’t get too attached to any one dish at Gemini Pizza. Alhoch has been known to take runaway hits off the menu without warning, like the mac and cheese at Saint Pasta. “Vodka sauce is everywhere in New Jersey, and it’s been my favorite pasta since I was in middle school. I wanted Saint Pasta to be known for our vodka sauce for those reasons, so when the mac and cheese became our top seller, I got rid of it,” he says. “I still get a few DMs a year about it from people who had it in those first few months.”

Not that Alhoch is trying to piss anyone off. His ultimate goal with food is to elicit a feeling of contentment. “My favorite thing during a busy night at Saint Pasta is looking around the dining area and catching people bobbing their heads to the music while eating their pasta, sometimes with their eyes closed,” he says. “I think everyone knows what it’s like when sound, smell and taste are all hitting just right. You're totally sucked into the moment. I look at those people and I know that at least for those few seconds, they're probably not thinking about anything else. They're just enjoying life.”

With Bitter & Twisted as Alhoch’s buzzy new backdrop, there are sure to be many more moments of head-bobbing bliss. 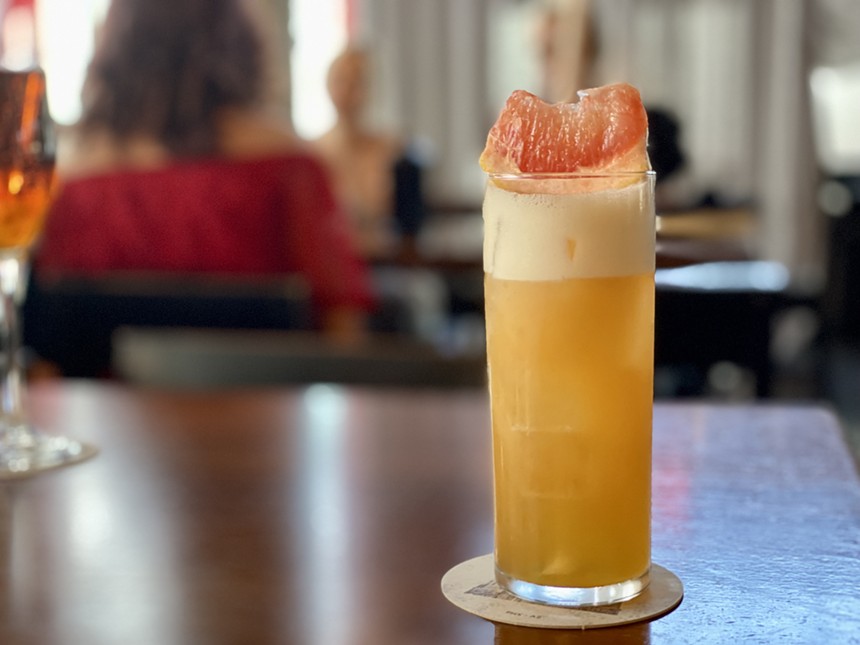 Bitter & Twisted's The Last Bastian is a summery sip with gin, vermouth, citrus sherbet, and pineapple.
Allison Young
Gemini Pizza, inside Bitter & Twisted Cocktail Parlour
1 West Jefferson Street
602-340-1924
Hours: 4 p.m. to midnight Tuesday to Thursday (kitchen closes at 11 p.m.); 4 p.m. to 1 a.m. Friday to Saturday (kitchen closes at midnight)
KEEP PHOENIX NEW TIMES FREE... Since we started Phoenix New Times, it has been defined as the free, independent voice of Phoenix, and we'd like to keep it that way. With local media under siege, it's more important than ever for us to rally support behind funding our local journalism. You can help by participating in our "I Support" program, allowing us to keep offering readers access to our incisive coverage of local news, food and culture with no paywalls.
Make a one-time donation today for as little as $1.