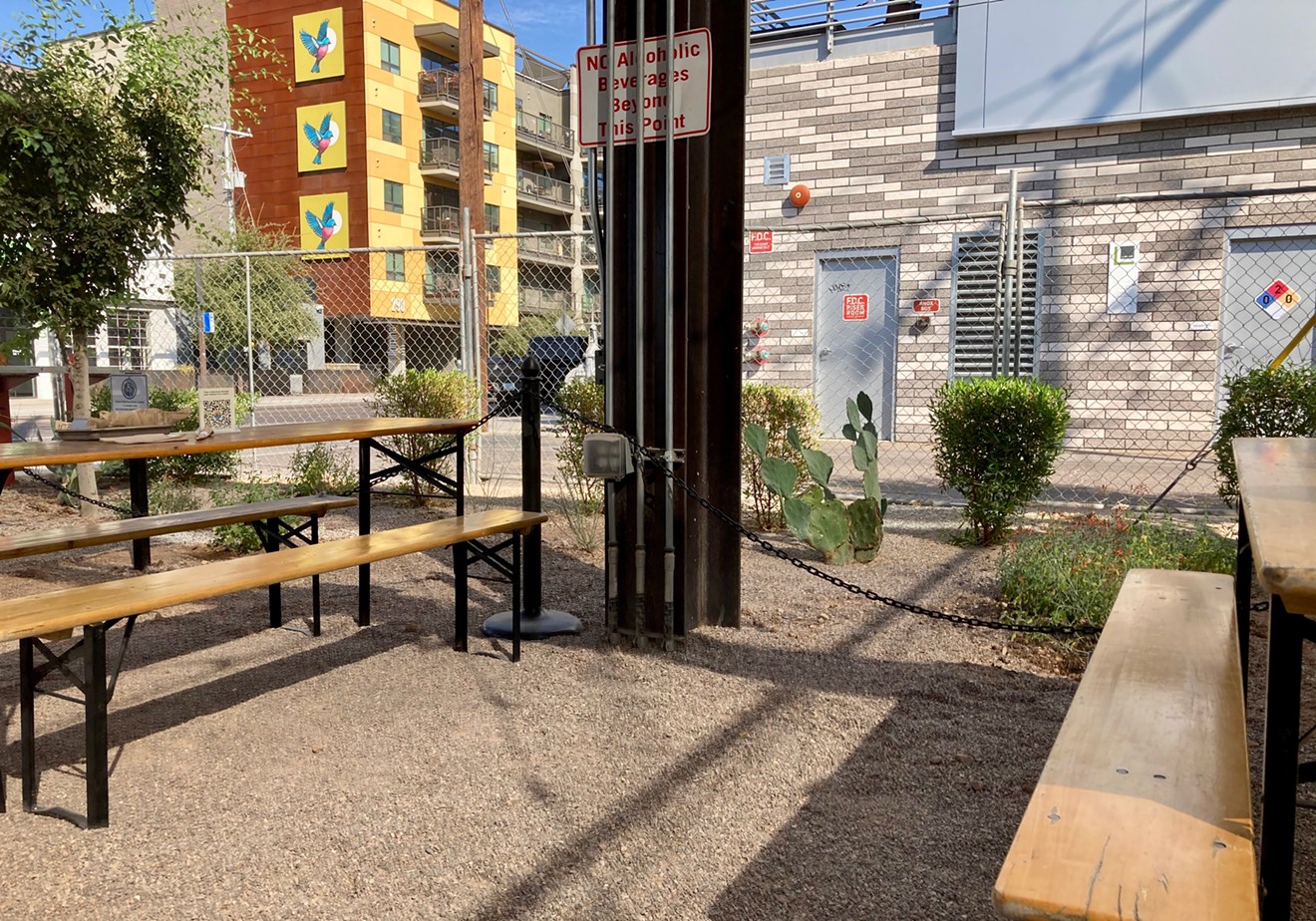 But that's all starting to change, thanks to a friendship between the brewery and Audubon Southwest.

On the morning of Saturday, October 17, a crew of 30 Wilderness employees planted nearly 100 native plants around the downtown beer garden to encourage visits from Arizona hummingbirds, butterflies, bees, and more.

The partnership between Wilderness and Audubon Southwest (a new name, following the merger earlier this year of Audubon Arizona and Audubon New Mexico) started in 2016 as a continuing monthly speaker series at the Rio Salado Audubon Center in south Phoenix called Birds n’ Beers. The lecture-style events were sponsored by Wilderness, which provided beer for the happy hour portion before the bird-themed talk.

Recently planted dyssodia along the sidewalk between Arizona Wilderness DTPHX and Roosevelt Street.
Carly Jones
"A lot of [breweries] care about conservation and the environment already, and so do their audiences, so it was a natural fit,” says Steven Prager, outreach biologist with Audubon Southwest, “Out of that, the Western Rivers Brewers’ Council was born.”

Other projects, like the collaborative brew Hummingbird Springs Saison, also materialized along with the lecture series and council. Now, Prager says he thinks they’ve created the first bird-friendly beer garden in Arizona, if not the whole world.

“There are bird-friendly gardens in all sorts of forms — in schools, businesses, backyard recognition programs — but no one else is really working with the breweries in this way,” he says, seated at one of the picnic tables on Wilderness' patio at Roosevelt and Second streets.

The garden — which was supposed to be planted in March but, you know, COVID — contains drought-resistant native plants like Parry’s Penstemon, desert milkweed, Mexican evening primrose, and more. The area is bird-friendly, but not open to people with their pet birds; it's not an aviary-style eatery like, say, The Perch in Chandler.

Carly Jones, social media coordinator and retail specialist for Arizona Wilderness Brewing Co., doesn’t think invitations for bugs and birds will be a concern with guests dining and drinking in.

“When you say something like, 'It’s a bee-friendly garden,' and people are eating next to that garden, it can be a little scary,” she says, “But it’s really about the habitats themselves.” She says the new flying visitors, which they started seeing immediately, don't necessarily flock to the space in droves. They show up a little throughout the day, or in the evening and morning, like the “really small bird” she just saw in the primrose.

“I was super stoked,” she says. “We’ve never seen this bird before.”

The garden, rows of plants found mostly along the eastern fence and front ledge against the sidewalk, still has a ways to go. It will create a wall of green along the edge of the space, attracting more birds and insects as it grows.

The teams also hope to shed more light on the Plants for Birds program.
Lauren Cusimano
And there’s a part two to the garden, which is noted on the signs in the form of a weblink.

“We hope that this garden will connect people to Audubon’s Plants for Birds program,” Prager says.

They hope Wilderness guests will visit audubon.org/plantsforbirds, where they'll reach a database where they can plug in their zip code. That generates an email with a list of plants native to their region, accessible to any backyard gardener, that tells the user what birds those plants attract. The larger goal is to inspire brewery-goers to plant some gardens in their own homes after they leave.

“You can imagine if gardens like this were dotted all over Phoenix, how that would change things for birds that happen to be flying over through migration or that live here year-round,” Prager says.

The Wilderness team is also hoping to set an example.

Arizona Wilderness Brewing Co. hopes other businesses may do the same.
Carly Jones
“I think it’ll honestly encourage other businesses down here to do the same,” she says. “We can bring this kind of lifestyle to downtown Phoenix even though we are surrounded in concrete.”

Of course, the idea's simple, too: It's nice to sip a beer and look at some birds.

“Birds are unique in that they are easy to observe; they’re colorful, they’re out during the day, they’re not in a hole in the ground,” Prager says. “I guess ... unless you’re a burrowing owl.”

And that's not to leave out burrowing owls. Soon after Wilderness’ garden was planted, Audubon Southwest made another announcement — a new collaboration with a local brewery. This time, they’re working with Wren House Brewing Company, which is releasing the U-9 Lager, named for a particularly cheeky burrowing owl identified by a colored leg band with a specific letter and number code.

The brew will be ready by mid-November. This collaboration hopes to highlight a need for volunteers in helping to create habitats for other burrowing owls.

Audubon Southwest also hopes other breweries with bigger spaces, or even small ones, know the group is open to planting more bird-friendly beer gardens. But Prager stresses there are other ways breweries can have an impact, like learning more about the Western Rivers Brewers’ Council.

Meanwhile, back in downtown Phoenix, the Wilderness team is awaiting its first hummingbird. As of this writing, still no hummers. But, Prager's confident, it “will be any day now.”

Editor’s note: This article was updated from its original version.
KEEP PHOENIX NEW TIMES FREE... Since we started Phoenix New Times, it has been defined as the free, independent voice of Phoenix, and we'd like to keep it that way. With local media under siege, it's more important than ever for us to rally support behind funding our local journalism. You can help by participating in our "I Support" program, allowing us to keep offering readers access to our incisive coverage of local news, food and culture with no paywalls.
Make a one-time donation today for as little as $1.