Is Taco Guild in Phoenix Really One of the Best Mexican Restaurants in America? 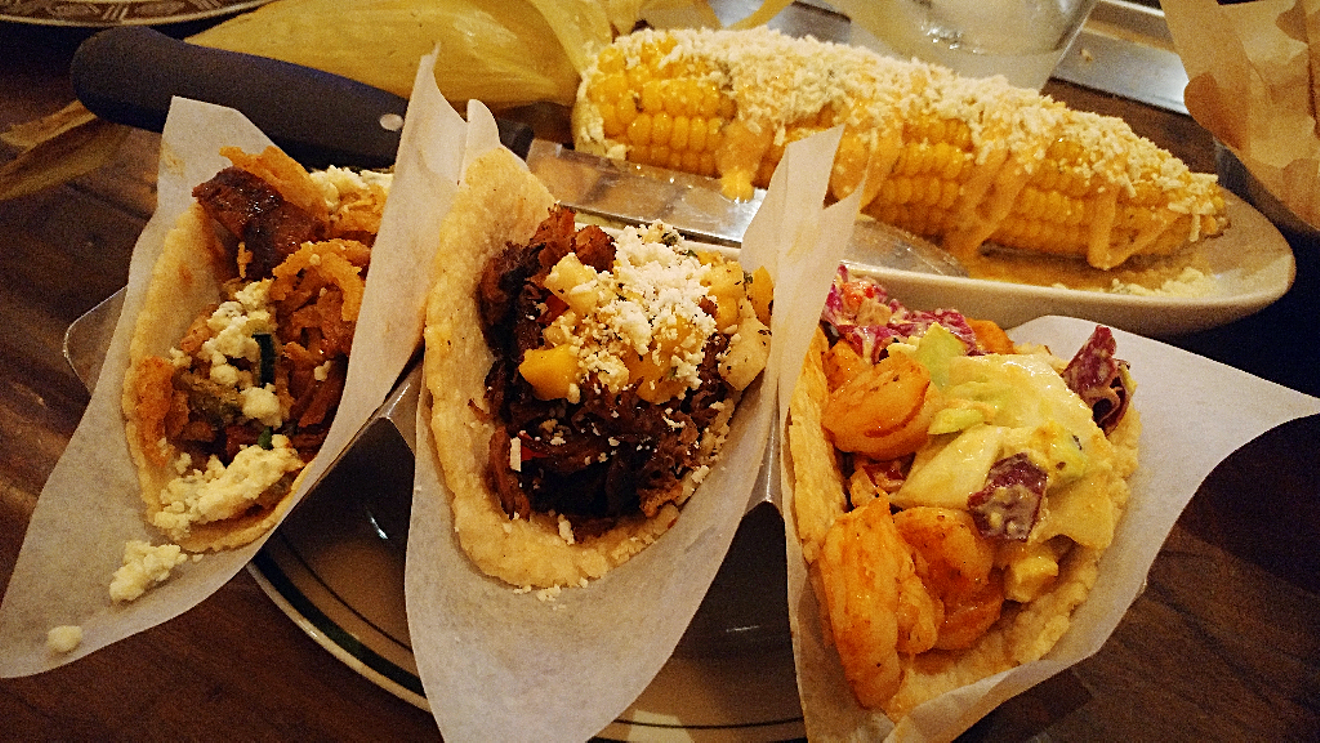 Is this the best Mexican food in the country? Patricia Escarcega
Is Taco Guild one of the top Mexican restaurants in the country? According to the Travel Channel's Food Paradise, a TV series that spotlights grub destinations across America, it's at least in the top five.

The central Phoenix restaurant, part of the Austin-based group that also owns the Z'Tejas chain of Tex-Mex restaurants, was recently featured on the show's "Best Mex" episode, coming in at number two in their countdown.

When New Times reached out to the show to figure out how and why Taco Guild made the cut, we received a canned statement that might be applied to any number of "fun" restaurants in the Southwest:

"When we set out to do our 'Best Mex' Food Paradise episode, we wanted to get a cross-section of the country and of course feature a restaurant in the Southwest. When doing research for the show, we look for restaurants that are a great mix of quality food and fun location. Taco Guild had that plus the local buzz that was hard to ignore," supervising producer Erinn Eichinger said in a statement.
"Local buzz"? When was the last time you and your friends went on about the terrific tacos and irresistible enchiladas at Taco Guild? The last time New Times wrote about the restaurant at length was almost three years ago, when Eric Schaefer reviewed the restaurant and found the menu, well, underwhelming.

"Taco Guild in Phoenix is a Beautiful Place with So-So Food" was the title of that review, and that pretty much sums up the Taco Guild experience today, too.

It is indeed a uniquely gorgeous space, a taco and tequila pub situated inside the old Bethel Methodist Church in central Phoenix, a structure that predates Arizona statehood and beguiles with its lofty ceilings, stained glass windows and massive front door.

It's certainly one of the most unique places in town to eat tacos and enjoy agave-based spirits. Service tends to be very friendly and attentive, and that goes a long way when your primary goal is to sit in a nice room and get moderately sloshed with friends on this week's installment of "Sunday Funday."

But the restaurant's taco-centric menu suffers from some serious issues. On a recent dinner visit, I sampled a half-dozen tacos from the restaurant's bifurcated "Old World" and "New World" menu, and there were only two in that bunch that I would consider ordering again. The Yucatan Shrimp taco with green cabbage slaw and avocado was generously stuffed with well-cooked shrimp, and the Chipotle Cherry Steak offered an intriguing mélange of flavors that included Bleu cheese and a house chile aioli.

But tacos like the Peking Duck yielded a wad of rather tough, unseasoned meat that not even plum sauce or an apricot compote could bring to life. The Guild Chicken taco was similarly dry and flavorless, and the rendition of Al Pastor offered here is so devoid of flavor, it makes the classic taco feel as desanctified as the old church it's served in. Freshly-made corn tortillas and creative toppings simply don't compensate for roughly braised or under-seasoned meats.

This piece, though, is not intended as a snide dig at Taco Guild. This is more of a lament at a missed opportunity. It feels like the folks at Travel Channel picked a spot that would photograph well, rather than a local restaurant that consistently delivers strong efforts. Why not highlight a Mexican restaurant that people actually buzz about, say a Tacos Chiwas, or a well-trodden but beloved favorite like Carolina's? Or another mom-and-pop gem that maybe isn't as photogenic, but delivers well-crafted and delicious food? We are fortunate to have many of those around town.

It's slightly ludicrous, of course, to confer the title of "Best" in all of America to almost any restaurant. We in food media are guilty of using puffed-up titles and lists on a regular basis - the format has become standard, part and parcel of how we communicate with readers today. At their best, though, these types of designations and lists are well-researched  and consumer-friendly, an easily digestible snapshot of great restaurants and dishes that we're dying to tell you about.

This pick, though, doesn't feel well-researched. Did anyone from the cable network program actually eat at Taco Guild? It's hard to say, but surely a TV show has the budget to send one person to try the food before calling it the very best in the country. If there's an easy lesson here, it's that noisy cable-network TV shows like Food Paradise, full of quick-cut montages and chattering narration, probably aren't the most useful source of where to find the best tacos in town.

It's all entertainment, sure, but if you must confer such a loaded title, why not be slightly more thoughtful about it?