Christopher Nelson, the founder and owner of the store, plans to unveil the new 1,200-square-foot space on Scottsdale Road north of Thunderbird Road in May.

"People have been telling us to open another store for years and offering us spaces. We have been blessed to grow organically, and that's what we will continue to do,” Nelson says. 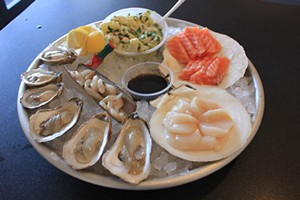 Nelson's will have a similar menu to its Arcadia location in the new Scottsdale digs.
Chris Malloy
The new Nelson's will have a similar setup and hours as the original location, which features a walk-up counter and plenty of fresh fish. In Arcadia, those who savor a brew at The Wandering Tortoise, a taproom and beer shop adjacent to Nelson's on Indian School Road and 24th Street, can mosey over to the fish market to grab some sashimi or a lobster roll, then head back into the bar. In Scottsdale, Nelson's will team up with TVG Tap Room & Bottle Shop to provide its guests some bites.

"We're not a restaurant... We don't even have a full kitchen in either of the locations, but we have great features daily and those have grown over the years," Nelson says, explaining the food is made by hand and with the help of induction cooktops.

The menu will also be almost identical, Nelson, who regulars affectionately refer to as "Nellie," says, with the same comforts his Arcadia customers are accustomed to including a full raw bar, a lobster roll on Wednesdays, and clam chowder and a poke bowl on Fridays. Everything is seasonal and the seafood is flown in fresh daily, so availability varies based on what is caught.

"We're in this kind of Amazon society where people expect things right away. But we don't even do pre-orders for fish. We're pretty old school here," Nelson says. ''We don't order by species; we order seafood from around the globe when it comes out of the ocean." 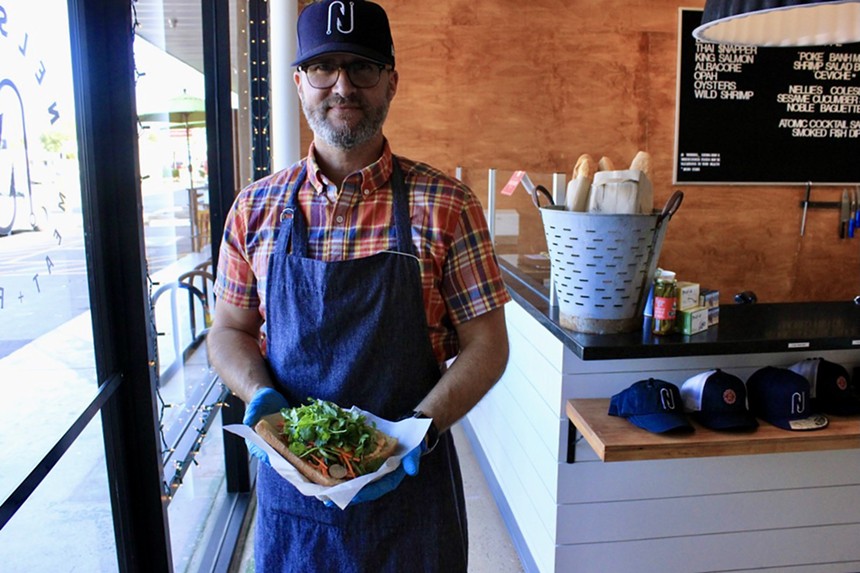 Christopher Nelson will tell you anything you want to know about fish and then some.
Chris Malloy
Nelson is inspired by a more simple way of life where chefs source ingredients from the sea daily to make ever-changing menus, he says, recalling a visit to Italy.

"We're obviously not near the ocean here, but when I was in Venice at the Rialto fish market, there was a guy there named Bruno who had been a chef for thirty years," Nelson says. "He is literally down at that market every morning with a pad writing an all-seafood menu, 16 courses."

And while Nelson's in Scottsdale is nowhere near the water, it will offer fresh seafood that may be as close as Phoenicians can get.

Scheduled to open in mid-May 2023
14224 North Scottsdale Road, Scottsdale
meat.fish
KEEP PHOENIX NEW TIMES FREE... Since we started Phoenix New Times, it has been defined as the free, independent voice of Phoenix, and we'd like to keep it that way. With local media under siege, it's more important than ever for us to rally support behind funding our local journalism. You can help by participating in our "I Support" program, allowing us to keep offering readers access to our incisive coverage of local news, food and culture with no paywalls.
Make a one-time donation today for as little as $1.

Natasha Yee is a dining reporter who loves to explore the Valley’s culinary gems. She has covered cannabis for the New Times, politics for Rolling Stone, and health and border issues for Cronkite News in conjunction with Arizona PBS, where she was one of the voices of the podcast CN2Go.
Contact: Natasha Yee
Follow:
Twitter: @natashawrote
Instagram: @natashawrote