Grandma-style pie from Crisp Premium Pizza. Courtesy of Adrian Langu
Last weekend, a New Yorker named Adrian Langu opened a pizza shop in Old Town Scottsdale. His shop, Crisp Premium Pizza, will serve grandma-style pies. These pies get their cues from New York. Langu has lived in Brooklyn and Manhattan. He started making pies at family-style pizzerias when he was a young teen.

"Grandma pie" is a pizza style that gets little love in the Valley. Here, Neapolitan is king. But pizza culture varies far and wide beyond Naples, the birthplace of the world's greatest flatbread.

"It's grandma-style pizza," he says. "It's not Sicilian or New York style. It's in between both." 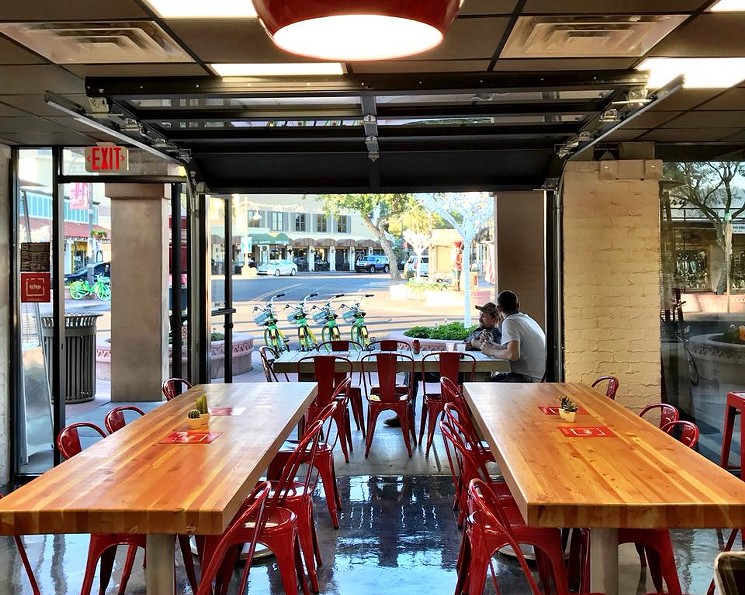 The interior.
Courtesy of Adrian Langu
Grandma pies are square. Their thickness is somewhere between Neapolitan and Sicilian, generally closer to the thick, doughy pies of Sicily. Langu bakes his pizza in pans slicked with olive oil, aiming for crispness on the underside and softness within. Grandma pie (also called square pie and, in some parts, tomato pie) resembles the kind of pizza you can make in a home oven.

Langu uses Caputo 00 flour, a finely milled Italian flour often used for pizza and pasta. "We're focusing on good products, a simple ingredient list," he says. "We're not trying to be all over the place."

Toppings are classic. Meat-wise, Langu topps pizzas with the likes of pepperoni, sausage, and chicken. Fresh mushrooms, olives, spinach, cherry tomatoes, and garlic are among the vegetable toppings. He hits pizza with both mozzarella and Pecorino cheese. He makes the tomato sauce himself.

The toppings.
Courtesy of Adrian Langu
He plans to introduce specials once Crisp Premium Pizza has been open for a little longer. For now, Langu is focused on cranking out pies for the hungry folks that can fit into his tiny Old Town space. The spot is small and simple, with no alcohol and not much other than pizza on the menu. (There are two salads for now.) A red pie costs $24, a white $27. Slices start at $3.25.