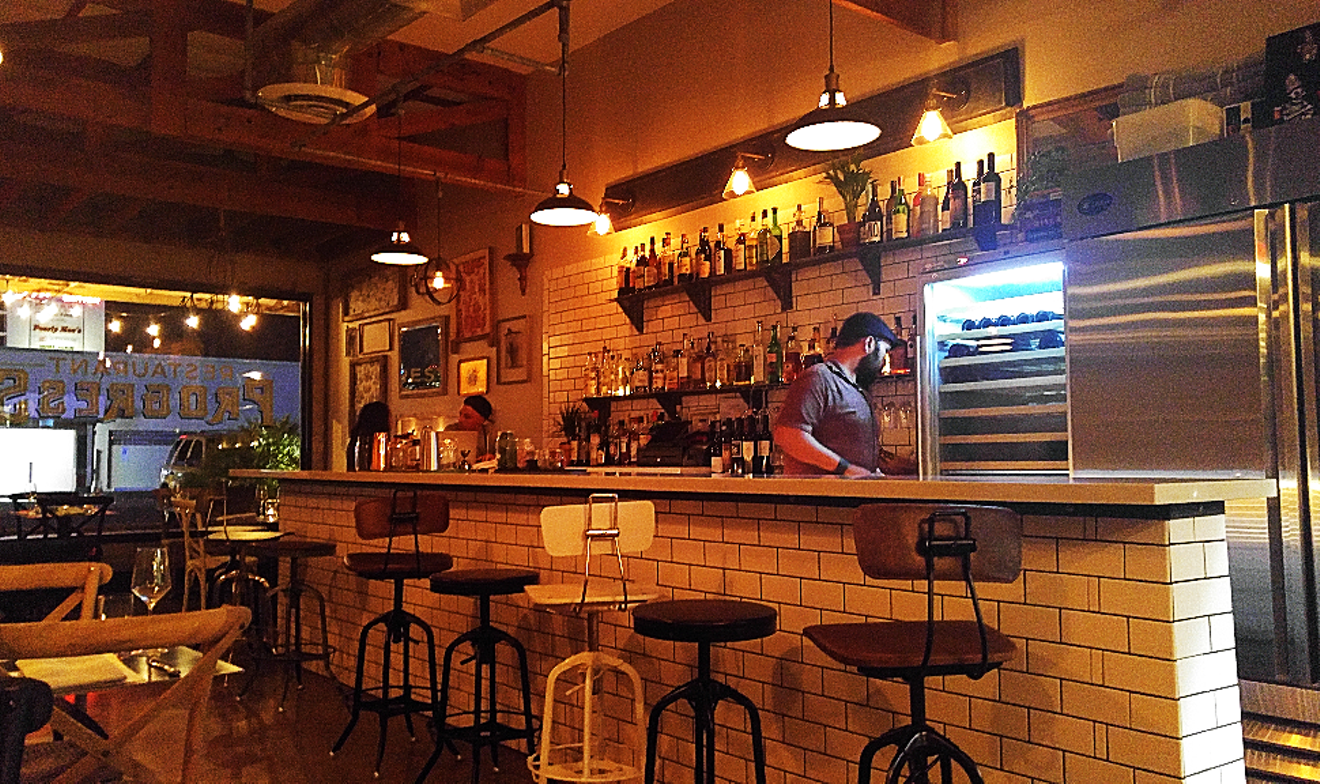 A view of the bar and dining room at Restaurant Progress, a new restaurant located next door to the historic Melrose Pharmacy in Phoenix's Melrose District. Patricia Escarcega
When a new spot opens in town, we can't wait to check it out — and let you know our initial impressions, share a few photos, and dish about some menu items. First Taste, as the name implies, is not a full-blown review, but instead a peek inside restaurants that have just opened, sampling a few items, and satisfying curiosities (yours and ours).

In hindsight, it seems sort of bewildering that it took this long for a spot like Restaurant Progress to make its home in Phoenix's Melrose District.

The neighborhood is known for its eclectic mix of independently run and singular spots, and its enviable midtown location puts it in close proximity to downtown, uptown, and other buzzy spots around Phoenix.

There are lots of places to eat and drink on Seventh Avenue, of course, but Restaurant Progress feels a little different. The restaurant, open for dinner and late-night service only, is an intimate, well-lit spot with little more than 30 seats, and it brings seasonal, fine-dining airs to a commercial strip that's mostly known for casual diners and taco spots.

It feels personal and intimate, in a way that few other places in the neighborhood currently do. The restaurant's chef-owner, TJ Culp, is one of the city's youngest and most impressive culinary talents, and nearly everything about his first restaurant already feels well-honed, thought-out, and artfully composed.

Crudo of yellowtail was a recent starter option on the small, focused menu at Restaurant Progress.
Patricia Escarcega
The appeal of Restaurant Progress begins with the design of the space itself, which seems a natural fit for the neighborhood's well-established fondness for the vintage aesthetic.

Service is more friendly than you might expect, and the quiet sense of hospitality that pervades the space turns out to be another reason to look forward to a return visit to Restaurant Progress.

The menu is small and focused; the dozen or so dishes offered for dinner recently fit onto one side of a single sheet of paper. The menu is expected to change monthly, a server informed me. The restaurant also offers a separate late-night menu that stretches from 10 p.m. to midnight on Tuesdays through Sundays, and a brunch menu on Sundays.

One of the starters on a recent night was a crudo of yellowtail, a sophisticated dish that looks more unassuming on the plate than it actually is. Meaty hunks of hamachi, buttery and luscious, played well against a bright, creamy scoop of avocado puree. Papery rounds of radish, a homemade nori chip, and a soft sprinkling of togarashi spices added a light, peppery snap. The dish achieved a very fresh, bright, and almost startling balance of flavor and texture.

Roasted carrots was a recent mid-course offering at Restaurant Progress. The plate featured four variations on the vegetable.
Patricia Escarcega
What to expect from a plate of heirloom carrots? At Restaurant Progress, such an order might yield a colorful dish that plays on a theme, and which showcases the chef's talent for expressing and enlarging subtle flavors.

Described as a "variations of textures," this carrot dish featured wispy ribbons of raw carrots; a couple of deeply caramelized, roasted carrots; dehydrated carrots transfigured into a soft powdery spice; and underneath it all, a silky carrot puree. The total effect was that of softy, buttery sweetness — richer and more surprising than what your palate is expecting.

The octopus and pork belly dish with white beans.
Patricia Escarcega
Octopus and pork belly, another mid-course plate on a recent night, could not be accused of subtlety. The dish was full of meaty, salty intensity — even the lovely muddle of cooked-down white beans on the plate, flecked with herbs, registered extra-rich, buttery, meaty notes. The pork belly was exceptionally lush and salty; the octopus pleasantly chewy, with a delicate char. The plate, nicely girded by the soft heat of Fresno chiles, is the kind of craveable pile of protein that you can easily wipe out in a the space of a couple of minutes.

The roasted chicken thigh with crimini mushrooms was a highlight of a recent dinner at Restaurant Progress in Phoenix.
Patricia Escarcega
You might have a hard time getting excited about a thigh of roasted chicken. But this entree — there are four entree options on the menu on any given night — revealed itself as one of the most flavor-rich plates of the evening. The chicken, beautifully browned and succulent, was steeped in a salty jus, and wrapped in the flavors of deeply caramelized pearl onions and crimini mushrooms. A few bright, sweet, gelatinous dots of dates, and a muddle of sweet potato puree, helped create an irresistible layering of sweet-savory flavors.

Pork tenderloin, another entree, was draped with a bright, snappy layer of mustard seeds. The bright pink, nicely cooked slices of pork were paired with black-eyed peas, infused here with a ham hock ragu, which seemed to help burn off some of the peas' natural earthiness, imbuing them with almost as much salty-meaty flavor as the pinkish, succulent rounds of pork on the plate.

And with its shifting menu, full of smart and confident cooking, it's easy to eat and drink here and feel like you're eating at one of the most exciting new restaurants to debut so far this year in Phoenix.