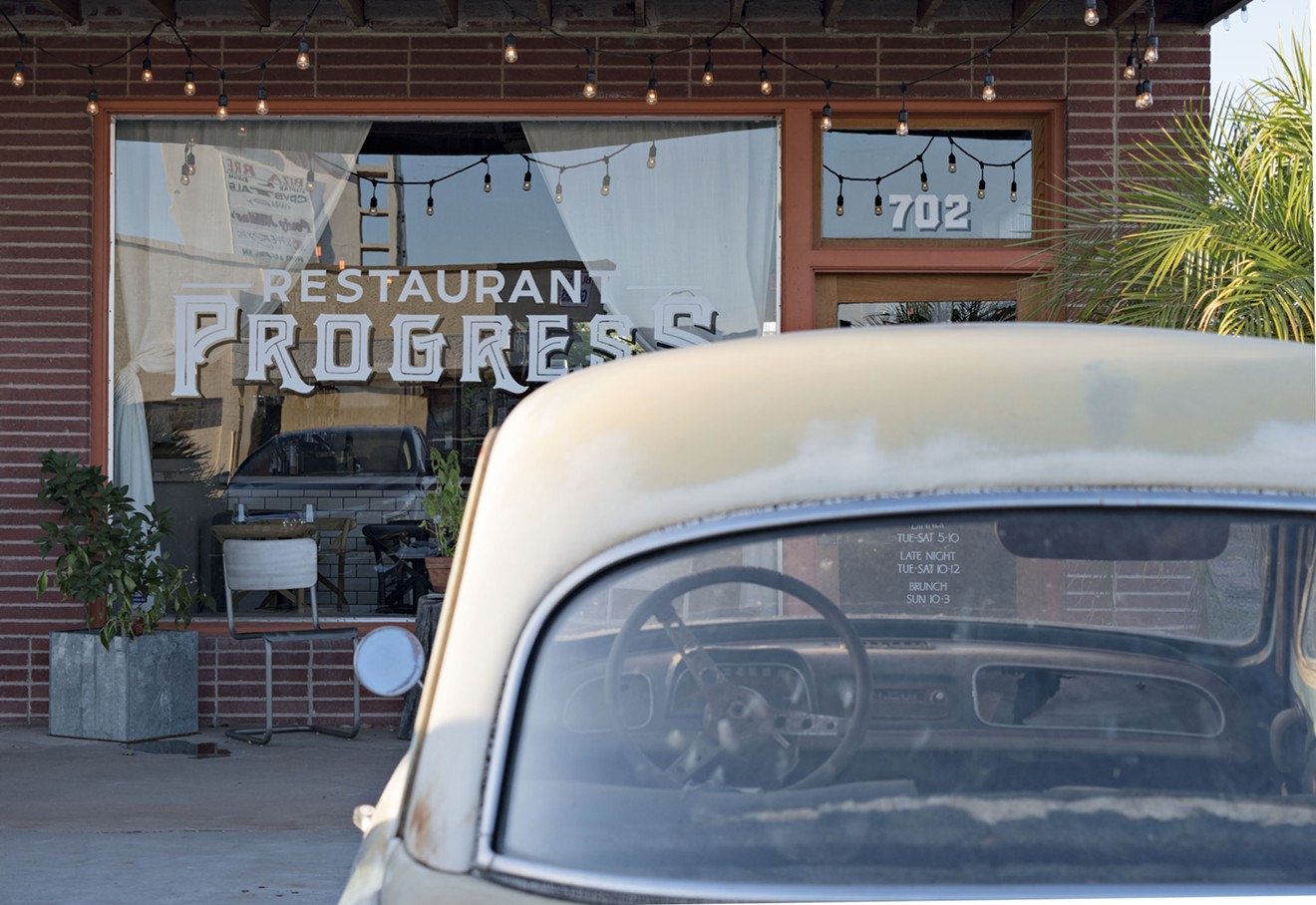 The buzzier new spots in town might have the market cornered on things like corporate offices, PR teams, and warehouse-size spaces, but they lack the sort of earnestness and unrestrained culinary expression that make Restaurant Progress a strong contender for best new restaurant in the city.

In other words, Restaurant Progress is small but mighty: a one-of-a-kind spot that deserves your attention. The small interior of Restaurant Progress is not short on charm.
Jackie Mercandetti
The 37-seat neighborhood restaurant, which opened this spring, is situated in the old Wagon Wheel Bar strip mall in midtown Phoenix’s Melrose District, next door to the Melrose Pharmacy. The commercial strip faces away from Seventh Avenue, which gives the location a surprisingly quiet and winsome quality. With its broad glass storefront windows and vintage neon signage, it’s about as charming as a strip mall can get in metro Phoenix.

The restaurant itself is a well-lit, shoebox-shaped space, with a design aesthetic that complements the gently fraying, vintage appeal of the Melrose District. The dining room is airy and bright by virtue of big windows and high, unfinished ceilings. Framed vintage wallpaper and fabric swatches hang on a pleasant gallery wall near the front entrance. Most of the seating is built for two, which helps accentuate the intimacy of the space. There’s a small bar area framed by gleaming white subway tile, and in the back, there’s the kitchen. Diminutive and wide open, this is where chef-owner TJ Culp and his small team chop, blend, pound, sear, and plate the food with what feels like unvarnished abandon.

Restaurant Progress chef-owner TJ Culp.
Jackie Mercandetti
If you follow restaurants in metro Phoenix, you’ve probably already had a brush with Culp’s cooking. The young chef-owner of Restaurant Progress is barely in his mid-20s, but already is an industry veteran, cutting his teeth cooking for Fox Restaurant Concepts and Zinc Bistro, among others. He really made a name for himself among the local food cognoscenti through his popular Pop-Up PHX dinner series. If you attended one of Culp’s pop-up soirees, you may recognize a somewhat similar dining format at Restaurant Progress. As with the pop-up dinners, the menu offers a five-course chef’s tasting menu for $75. If you can swing the price, it offers the best entry point for getting to know Culp’s brand of smart, refined cooking. For an extra $35, bartender Jason Dominguez provides wine pairings with each course.

There’s also the a la carte option. Whet your appetite with one of Dominguez’s half-dozen or so craft cocktails, like The Experience, a simple blend of gin, rose water, lime, and arugula simple syrup, which is particularly well-balanced and refreshing, and little stronger than it sounds.

The concise cocktail menu at Restaurant Progress strikes a balance between three lighter cocktails featuring fresh citrus and juices (shown above, often with savory touches) and two darker, boozier options.
Shelby Moore
The menu — seasonally driven, modern American fare — changes about every four to six weeks. On Sundays, a separate brunch menu is served. Altogether, there are only about a dozen dishes on the menu, which are divided by appetizers, mid-course offerings, entrees, and desserts.

A snapper crudo, an appetizer on a recent night, featured buttery, citrus-kissed hunks of the fish topped with papery rounds of radish, dressed with chile and bright puffs of avocado puree. The dish delivered a remarkable balance of rich and light flavors, showcasing the chef’s impressive talent for bringing together sweet, sour, bitter, and salty in surprising and satisfying ways. A midcourse plate of pork belly was a dinner highlight on a recent visit. The extra-rich, thick slab of meat was beautifully seasoned and tender yet also crisp. The perfectly melty cut was served on a lovely heap of herb-flecked white beans.

Crisp pork belly served over herb-flecked white beans.
Jackie Mercandetti
Perhaps surprisingly, one of the most satisfying midcourse plates I’ve ever had at Restaurant Progress is also one of the most simple: a roasted mushroom dish served with a creamy chicken-liver sauce. The meaty, salty portabello hunks glistened like steak on the plate, dense and flavorful. Oyster mushrooms, almost as pleasantly chewy and slinky as octopus, were rich and gently charred, bathed in the wonderful, slightly nutty sauce.

A perfectly executed rendition of classic tagliatelle ragu.
Jackie Mercandetti
There may not be anything particularly groundbreaking about Restaurant Progress’s take on tagliatelle, but the dish is simply too good to pass up. The snarl of well-made pasta was bathed in a lovely sugo ragù on the night I ordered it.

There is usually a seafood option, and recently it was John Dory, served beautifully crisp, paired with a light, fragrant tomato sauce. The dish was accompanied by a scattering of clams and a few slices of slightly sweet, sauteed fennel, which added a nice herbal element to the dish.

Braised beef cheeks served in a Burgundy sauce.
Jackie Mercandetti
The only major misstep I’ve encountered at Restaurant Progress involved a seared duck breast. On the night I ordered it, the fat was not properly rendered, which left the skin flabby and chewy. That specific transgression was forgiven shortly after, though, thanks to a highly memorable dish of beef cheeks with Burgundy sauce. The meat was so tender, so gorgeously braised, that it was as soft as cream. Some chive crema, spooned over the sauce-laden meat, seemed to melt into its fibers.

Quibbles aside, it’s hard to spend an evening at Restaurant Progress and not fall in love with the smart, refined cooking you encounter there. Prices are not what you would call economical, but the food and service is uncommonly good. This is a serious restaurant that deserves a serious local patronage.