Cafe Review: In Downtown Phoenix, Pa'La Is Evolving in an Unlikely Direction 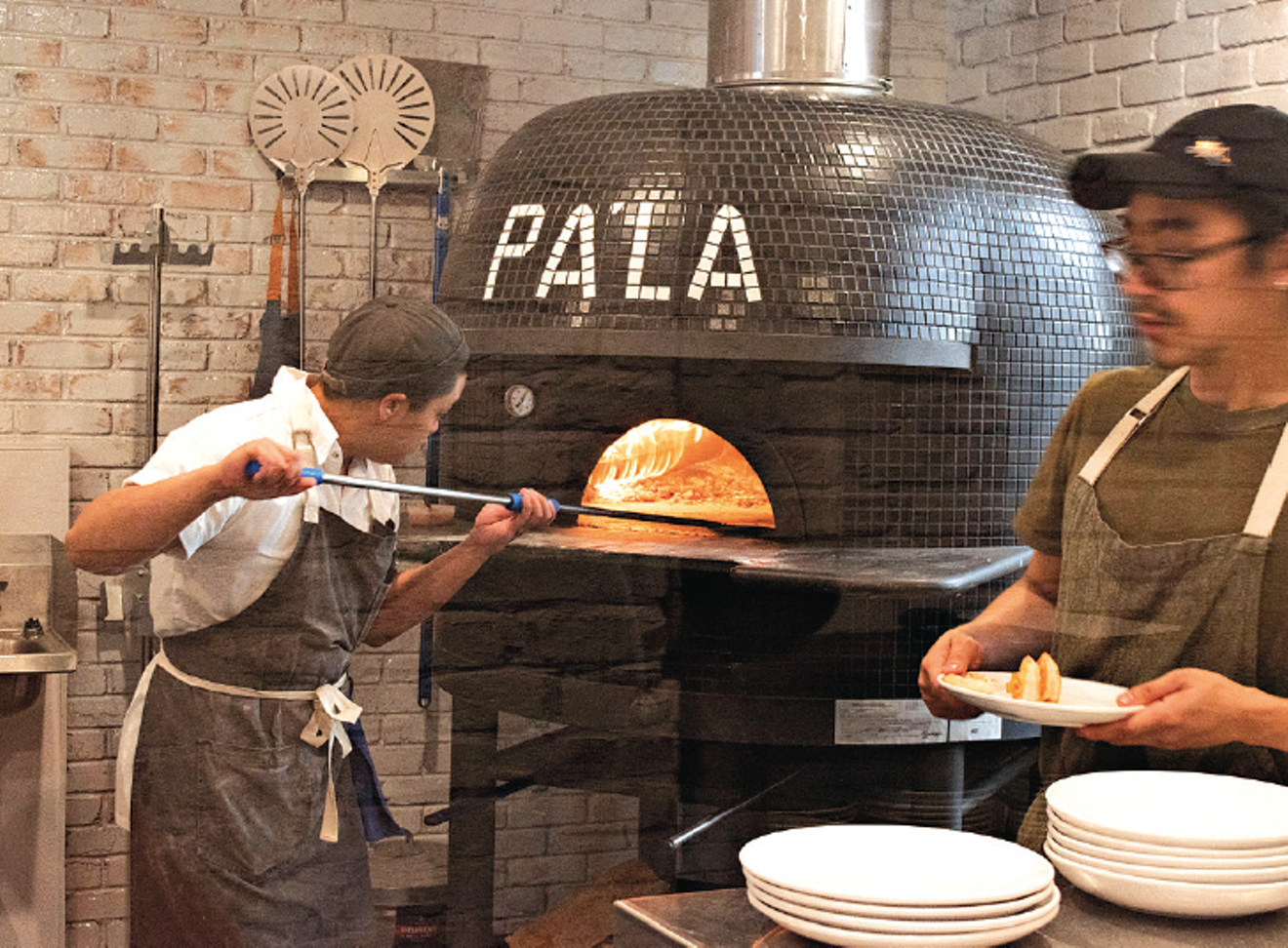 It was a bit of a surprise. The place lives in a bungalow older than color TV. Its cooks are pretty much limited to wood-fired heat sources. What made Pa’La so stellar was the combination of its radical simplicity — the dominant approach in Urciuoli’s native Italy — with the chef’s network of obscure elite suppliers in Italy, Europe, and the U.S. Without smokescreens or fancy clothes, food so simple needs top ingredients to shine, and Urciuoli goes full-tilt sourcing and paying for them.

At the first Pa’La, Urciuoli serves a tapas plate of rye bread, speck, and aged cheese — a starter requiring less assembly than a lunchbox ham-and-cheese. He has done a steak sandwich that’s not much more than steak and fresh bread. Each ingredient always felt essential, visible, fully itself.
“Less is more,” Urciuoli says. “I always take a look at a dish and think how much I can take out, rather than put in.”

At a new second spot, Pa’La Downtown, simplicity isn’t an immutable law like gravity. Rather, it’s one path down a fork in the road, a path that only some dishes travel.

This divergence stems from an unlikely union in the kitchen, a half-open space lorded over by a wood-fired oven in the back of a narrow dining room (below a second-story dining room) spacious and glitzy and lined with wistful prints of the Italian seaside, curvaceous leather booths, and low-slung light bulbs.
The unlikely kitchen union? A meeting of Italian and Japanese cuisines.

Though far apart in space, these two actually have a lot in common in spirit. Both have beloved traditions nearly spartan in their austerity (see: sushi and yakitori, panini and pasta). And both often follow a common north star: over-arching simplicity.

And yet, once the mozzarella and togarashi mingle, things get complex.

At Pa’La Downtown, this mixture — which touches some but not all dishes — often results in great eating. Much of this hybrid category consists of Italian-leaning plates boosted by Japanese-inspired tweaks by Jason Alford, the former Roka Akor chef captaining Pa’La Downtown with Urciuoli. The menu has expanded into crudo, pizza, a few entrees, and flash specials like pasta, gnocchi, and soups. There’s also a cocktail list and elaborate desserts. Tapas, though, are still the main event. If you order right, a fleet of small plates come a few at a time, fregola and charred octopus steadily filling your table. The simple, more Italian tapas plates are delicious. 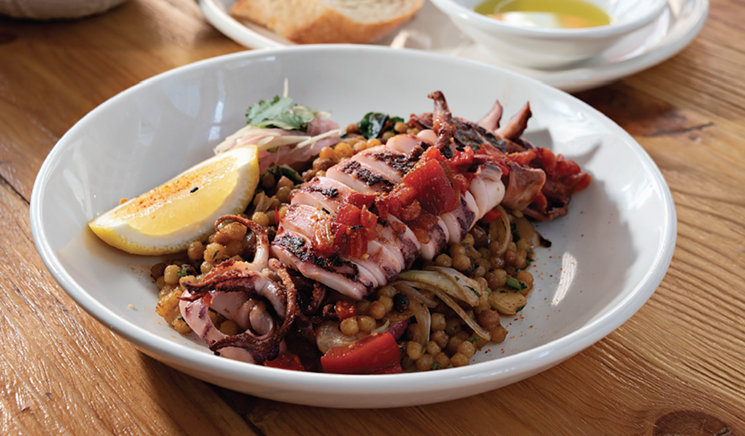 Urciuoli remains a master of breads. A plate of baguette rounds and small-batch olive oil sizzling grass and pepper down your throat is heady enough to inspire lamentation of the recent death of bread service in American restaurants. His focaccia is even better. Spongy-soft with lots of inner airiness, it packs a grainy intensity far beyond anything possible with tired white flour.

The kitchen is still tweaking flours, even for pizza. Recently, they’ve used blends of esteemed grains from the American West, including some from Tucson’s BKW farms. Pizza dough sees a major boost from olive oil made by a top Italian producer, Decimi (out of Umbria), which made only 850 liters in last October’s bottling. (Urciuoli snagged many.) 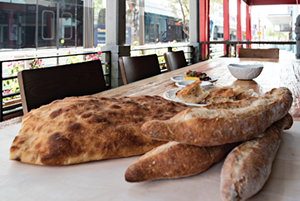 Pa'La's wonderful breads.
Jackie Mercandetti Photo
Pa’La Downtown’s thin pizze are a study in lightness. Slices are so slight they’re barely there — yet all parts radiate flavor. There’s a margherita aromatic with wild oregano, pizza with ricotta and salumi, even specials that loop in toppings like corn, peppers, and togarashi.

The plates most likely to lodge in your hungry mind — beyond those dripping with olive oils from Liguria down to Sicily — veer from Urciuoli’s extreme simplicity into the Italian-Japanese realm.

Urcioli and Alford serve three scallops with an apple-y sauce far from apple sauce. The greenish slurry underneath is peas blended with miso, olive oil, garlic, and onion. Lime juice and za’atar are added on top, plus tiny apple shaved from the whole fruit with the sharp holes of an Oroshi grater. The fruittiness sings, harmonizing with the sea-sweetness of the scallops while keying into the miso’s umami.

Downtown, the best bite is another creative hybrid: a beef skewer with polenta that has even more going on. 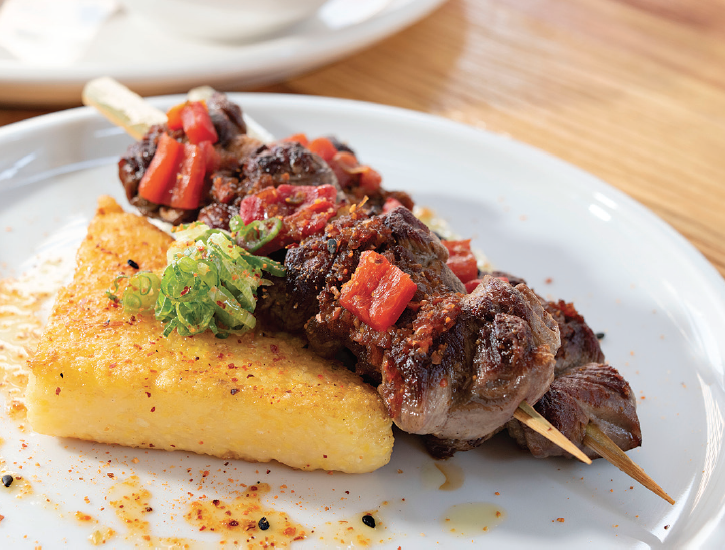 This dish straddles polenta-with-meat, common in northern Italy, and beef tataki. The bridge: a Japanese-style wafu sauce marinade boosted with maple syrup, olive oil, and grated apple. The kicker here is red pepper, roasted in the wood-fired oven and cubed, bathed in its own marinade, one with the hits of salt and brine from colatura, the ancient southern Italian sauce made from the juice of pressed, salted anchovies.

And that’s just the beef. The polenta? On the opposite pole of the simple-to-complex spectrum: made with the barest essentials, just cornmeal and water.

The beef — New York strip accordioned onto a short skewer — is massively rich. Hints of anchovy and roasted pepper are so subtly tucked in you might not notice them for a few bites. They blend seamlessly, accenting the beef, pushing it forward. The two chefs say their soldering of styles is still evolving, but they may have found the right balance here.

Not all plates reach this high level. A vegetable sandwich on focaccia is pretty average, clotted with creamy sauce and light on the vegetables. A bright salad of lightly seared tuna recalls chirashi (Japanese) and crudo (Italian), but fell short of Phoenix’s top-flight versions of either.

Still, the unlikely Pa’La 2.0 evolution is ongoing. Already, it’s bringing something sophisticated, original, and softly electric to downtown Phoenix. It’s the kind of place with the pull, flexibility, and variety to hit for a quick bite, meal, drink, pizza, or even just bread and glorious olive oil — a place to follow and return to over the coming months and, hopefully, years.

Bread and Olive Oil $3
Burrata with Tomatoes $11
Beef Skewers with Polenta $9
Scallops with Apple Miso $14
Specialty Pizza $14 (varies)
KEEP PHOENIX NEW TIMES FREE... Since we started Phoenix New Times, it has been defined as the free, independent voice of Phoenix, and we'd like to keep it that way. With local media under siege, it's more important than ever for us to rally support behind funding our local journalism. You can help by participating in our "I Support" program, allowing us to keep offering readers access to our incisive coverage of local news, food and culture with no paywalls.
Make a one-time donation today for as little as $1.
Chris Malloy, former food editor and current food critic at Phoenix New Times, has written for various local and national outlets. He has scrubbed pots in a restaurant kitchen, earned graduate credit for a class about cheese, harvested garlic in Le Marche, and rolled pastas like cappellacci stuffed with chicken liver. He writes reviews but also narrative stories on the food world's margins.
Contact: Chris Malloy
Follow:
Twitter: @yollamsirhc
Instagram: @malloy_chris/