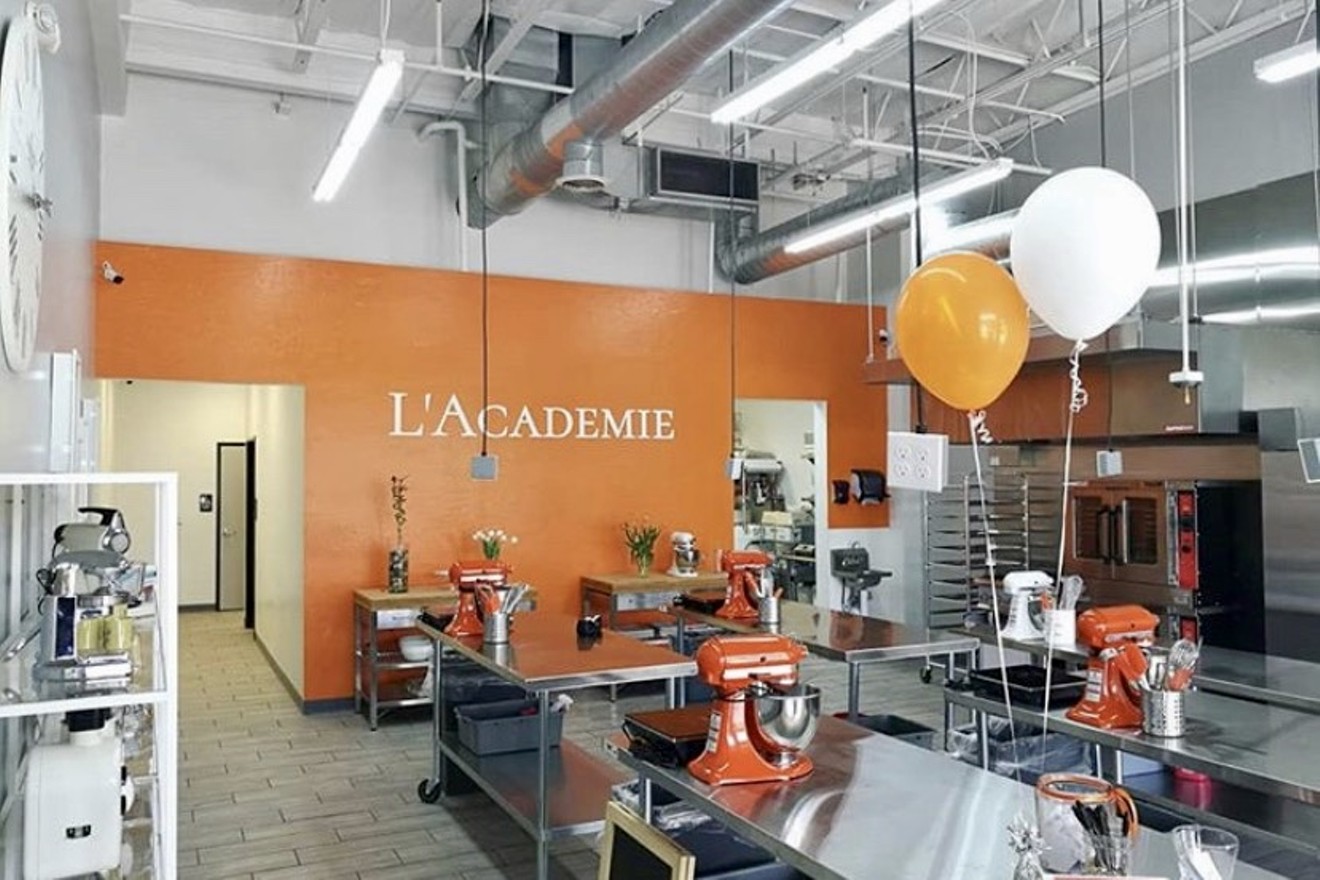 A look inside L'Academie School of Cooking & Baking. L'Academie School of Baking and Cooking
Chef Dan Boman is no stranger to Phoenix pastry fans. For those who follow his work, he won Pastry Chef of the Year in 2017 at the Cook. Craft. Create. — the American Culinary Federation National Convention & Show in Orlando. His winning sweets were inspired by the Pirates of the Caribbean for a Disney Villain category. Some Phoenicians were thrilled to learn he’d opened a cooking and baking school in Gilbert in August 2019 — and many wanted to learn more.

He agreed to an interview at his school, L'Academie School of Baking and Cooking. It is a brand-new studio with an orange-and-white color theme. An orange wall faces the entrance with "L'Academie written in white.

Four stainless steel stations are outfitted with orange mixers and a container of baking utensils. Ovens, racks, and a large refrigerator stand at attention against one wall. The chef’s many awards fill the opposite wall. There are enlarged photos of two chocolate showpieces. One won him the gold medal at the National Team Pastry Championship, Desert Ridge, in 2009, the other for his 2017 Disney villain piece. One can’t help but feel intimidated to meet the chef in person, that is, until he and his business manager and wife, Abby Boman, welcome you with hugs. 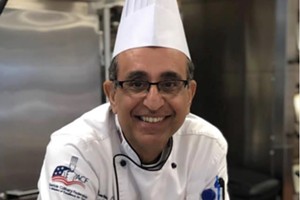 "We are all about baking here," Chef Dan Boman says.
L'Academie School of Baking and Cooking
“Sorry, we are all about baking here, so there are no chairs,” Boman says. “Let’s pull up some stools. Have a brownie.” They are melt-in-your-mouth brownies, with just the right amount of sweetness. The best part is they were made in one of his recent classes. This is a great note to start on.

Boman is not your typical pastry chef. He says he went against his cultural norms when he chose his career. Originally from India, he says his parents expected him to be a doctor or an engineer. He is calm as he reminisces about the moment he found his career path.

“When I was 18, my father took me along to a hotel where his cousin worked as a pastry chef. The moment I walked in and saw the setup, an air-conditioned room filled with beautiful showpieces, I was hooked,” he says. “I was always creative and abstract oriented. After talking to the chef for some time, I decided to make this my career.”

He attended catering and pastry school in India, then got an education in hotel management. His career began as maître d’ at the Jockey Club, a posh restaurant at the Taj Residency in Bangalore, but his heart was in baking and pastry — enough to make him approach the hotel pastry chef about a position in the kitchen.

The award-winning Pirates of the Caribbean showpiece from 2017.
L'Academie School of Baking and Cooking
Boman worked as a pastry cook at the Taj Residency for three years till he decided to further his education. He immigrated to the United States, where he attended The Restaurant School, formerly Walnut Hill College, in Philadelphia and completed the pastry chef training program. He began his career in Atlantic City, New Jersey. He says he worked countless hours at a casino, and only went home to sleep. He rose from pastry cook to pastry chef to executive pastry chef.

Over the years, Boman worked for Tropicana, Trump hotels, Four Seasons, and Hilton. But it wasn’t until 2007 or 2008 that he felt his true calling. He wanted to teach what he had mastered over all these years.

“I took a dramatic pay cut, but making a difference in the students’ lives, seeing the twinkle in their eyes when they get it was and still is the best feeling,” he says. Since then, he has mentored students at the Art Institute of Phoenix, Le Cordon Bleu, and Scottsdale Community College. In spite of his wife’s concerns that he is working too much, he continues to teach a few classes at Scottsdale Community College.

The best chocolate showpiece from the National Team Pastry Championship in 2009.
L'Academie School of Baking and Cooking
When the Art Institute of Phoenix closed in December 2018, he decided to pour his life’s savings into opening his own school — L’Academie in Gilbert.

“I could not have done it without the support of my beautiful bride and my friends,” he says. The school’s chefs are qualified to teach from basic to professional levels. The goal is to make cooking and baking accessible to people without forcing them to commit to a pastry degree, which usually takes nine months to complete.

While Boman runs the baking program, he has brought on chef Juan Martinez to teach cooking classes. Martinez likewise holds an impressive resume. His many accolades include the ACF Arizona Chapter Chef of the Year in 2017 and President of ACF Chef's Association of Arizona, 2018-2020.

Boman’s commitment to his students is apparent.

He recently had a class where only one student showed and still decided to teach. “I figured why not? She’s here to learn and deserves my attention.” And he doesn't just have the students follow recipes. “We explain the why behind what happens so that when they are at home, they can troubleshoot and correct their mistakes.”

Boman’s classes are open to all levels of experience. With small class sizes and only two students per station, attendees have more chances to be hands-on and receive individual attention from these award-winning chefs. The chefs’ mission is to “empower students with the knowledge and skills they need to be successful culinarians.”

Individual workshops are two to three hours long and cost between $35 and $65. Four- to eight-week bread and pastry workshops are also available for deeper exploration of the craft. In addition, L'Academie offers team building, special orders, and kids' birthday parties.

For more information, visit the L'Academie Baking and Cooking School website.
KEEP PHOENIX NEW TIMES FREE... Since we started Phoenix New Times, it has been defined as the free, independent voice of Phoenix, and we'd like to keep it that way. With local media under siege, it's more important than ever for us to rally support behind funding our local journalism. You can help by participating in our "I Support" program, allowing us to keep offering readers access to our incisive coverage of local news, food and culture with no paywalls.
Make a one-time donation today for as little as $1.