"Suddenly, there was a limit to how much meat you could buy,” Rachael says. Then, the local gyms closed and home prices skyrocketed.

“If we don't have food or a gym, what do we need a city for?” says James. He decided to sell his yellow 1972 Chevy Caprice and buy 10 acres of land in Douglas, and move his wife and four kids there.

According to USDA, Black farmers composed only 14 percent of farmers in 1920. That number had dropped to 1.3 percent nationally by 2019 according to The Guardian. In Arizona, as of 2017, the figure was less than 1 percent.


The Stewarts started with nothing, but now have nearly 200 animals, including cows, goats, turkeys, chickens, ducks, alpacas, and pigs. They are dabbling in selling lamb and goat meat, and will be offering duck eggs soon. The ultimate goal is complete sustainability and eliminating grocery store foods.

For the couple, it’s been a year of learn-as-you-go since they purchased their land. While the whole family has embraced this new way of living and learning, lessons have come at a cost, including the loss of a few animals.

After feeling comfortable with livestock, the family plans to venture into growing crops, James says. The idea is to make the business of farming more equitable, with hopes of diversity and equal representation, he says. 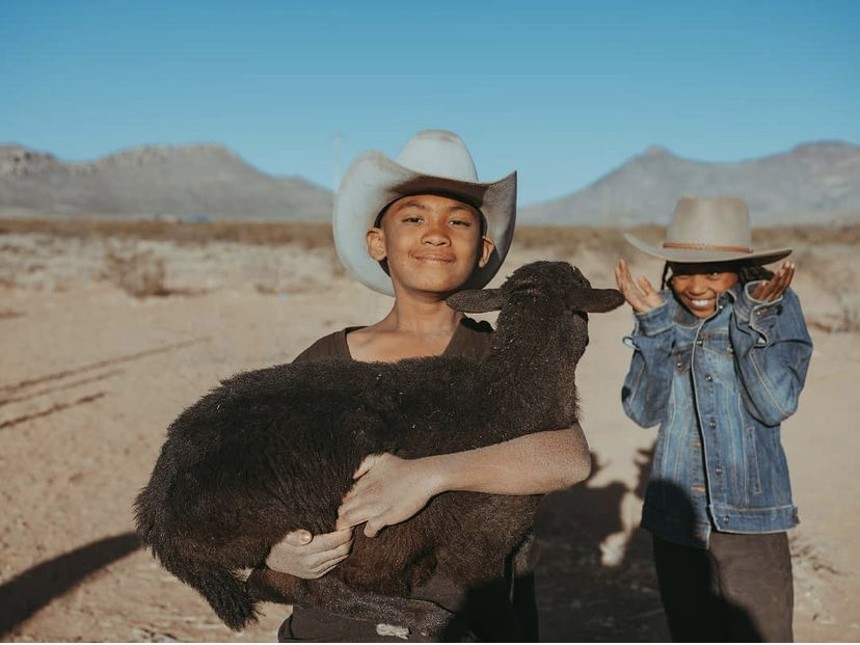 James, 12, and Zinaye, 11, help with livestock around the ranch.
Ivan McClellan

Rachael says raising animals has taught the family even more respect for the food they eat.

“I cry a lot,” she says. “But we are action-oriented so we get up, dust ourselves off, and keep going.”

The ranch creates opportunities for Javon, 9; Zeyana, 10; Zinaye, 11; and James, 12. The kids help with feeding the animals.

The Stewarts say the family is learning to live lean and make choices at every turn. Purchasing sheep took precedence over a solar system. Feed for animals took priority over finishing an adobe building.

“There are no screens here,” says James. “No ‘What am I supposed to do?’ There is always something to do on the ranch.”

James says at age 18, his kids will have a choice: Stay with the business they helped build, or venture off on their own.

According to the Stewarts, budgeting is a big challenge. The budget to start a ranch with a processing center is $500,000 to $600,000 dollars, and you must be operational to receive grants.

Rachael calculates an estimate of $400,000 to make the ranch operational. The cost includes purchasing materials to build a well, pond, fences, refrigeration systems, and other structures, as well as animals, seeds, delivery vehicles, trailers, solar panels, a greenhouse, an education center, and other equipment. So far, their GoFundMe has raised $10,000.

The Stewart kids are always ready to lend a hand.
Southwest Black Ranchers


For the Stewarts, this is a calling. So far, they have helped minorities find land and have helped with livestock rehoming for socially disadvantaged families. They have started a zero-waste program where they are working to get local food waste, compost it, use it, or make it available to other farmers.

In the future, aside from dairy products, the couple is looking to offer products with longer shelf life: nitrate-free cured meats, dehydrated duck eggs, egg white powders. In the works are mentorship for minorities, hydroponic system, and agrotourism.

“We are trying to develop a network with people like us who don’t have a lot of money, but want to be self-sustained,” James says.

How can you support them? Donate to their GoFundMe page or subscribe to their kids’ Patreon channel or donate $20 a month toward animal feed.

“We might not be the richest, but we feel rich because of what we're doing,” says James.

Find more information on the Southwest Black Ranchers Instagram.
KEEP PHOENIX NEW TIMES FREE... Since we started Phoenix New Times, it has been defined as the free, independent voice of Phoenix, and we'd like to keep it that way. With local media under siege, it's more important than ever for us to rally support behind funding our local journalism. You can help by participating in our "I Support" program, allowing us to keep offering readers access to our incisive coverage of local news, food and culture with no paywalls.
Make a one-time donation today for as little as $1.