Becky's Breakfast Burger at Slicks Garage in Peoria comes with a fried egg, bacon, and crispy hash brown. Patricia Escarcega
When a new spot opens in town, we can't wait to check it out — and let you know our initial impressions, share a few photos, and dish about some menu items. First Taste, as the name implies, is not a full-blown review, but instead a peek inside restaurants that have just opened, sampling a few items, and satifying curiosities (yours and ours).

Slicks Garage is a nostalgia-fueled, automobile-themed restaurant and bar that opened in the area around 83rd Avenue and Bell Road in Peoria last fall. The heavily trafficked neighborhood has been dubbed P83 by developers and city boosters, and it's been a major dining, shopping, and entertainment hub in the West Valley for something like three decades now — one historically dominated by chain restaurants and fast food.

Slicks Garage, sandwiched in between the neighborhood Hooters and a monolithic P.F. Chang's, is kind of an anomaly on this strip: a family-owned restaurant in an ocean of chains. It's an expensive and crowded neighborhood to set up a new restaurant, but if there's one place that seems fit for survival, it would probably be a place like Slicks Garage.

No, you won't find chicken lettuce wraps or skimpily clad servers. But you will find a crowd-friendly menu of American grub and New Mexican-style home cooking, served in a bright and genial setting.

The dining room is tricked out with motorcycles, vintage fuel pumps, and license plates, plus other assorted Americana, so that you feel like you've wandered into someone's dream of a man-cave. There's also a long, colorful, graffiti-covered bar with TVs, and outside, a spacious patio area. Service is so upbeat and friendly, you might swear you've made a new friend by the end of your meal.

The dining room at Slicks Garage is an homage to vintage automobiles, motorcycles, and gas stations.
Patricia Escarcega
The garage theme is carried over to the expansive menu, where appetizers are known as "Tire Kickers," sandwiches are "Tire Busters," and the burgers are named things like the "Gas Hog" and the "Grease Slapper."

The menu, by the way, is huge, encompassing all the standard American fare — sandwiches, burgers, soups and salads — and then some. There's also the "Land of Enchantment" side of the menu, where you'll find New Mexican specialties like carne adovada, green chile, and enchiladas.

A.J. McLean and Raina Young, the mother and son team behind Slicks Garage, hail from New Mexico (McLean tells New Times his mother opened the very first Applebee's in Albuquerque back in the day), and the kitchen uses the real thing for its chile verde: Hatch green chiles.

Probably the most popular starter at Slicks Garage is the V-6 Quesadilla, a flour tortilla stuffed with your choice of chicken or beef, bacon, olives, and green chile, all of it lacquered and held together with plenty of melted cheese. The chicken is cooked to a spongy, well-seasoned consistency, the green chile is more savory than spicy, and the softly griddled tortilla yields a nice, satisfying crunch. 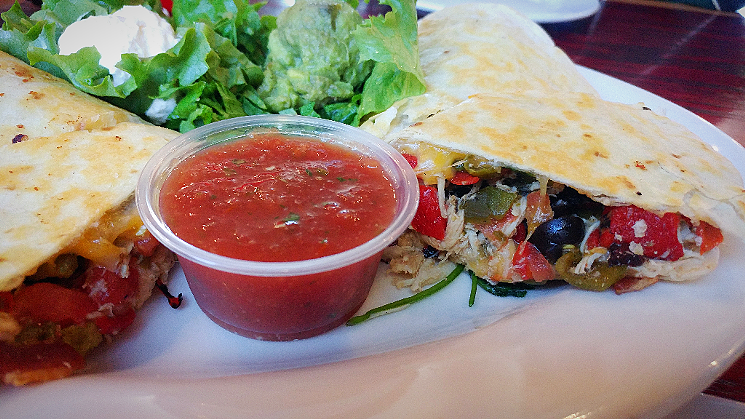 The V6 quesadilla at Slicks Garage.
Patricia Escarcega
There are tacos, of course — there will always be tacos — and the ones at Slicks Garage are chock-full of flavor. The taco combo plate lets you sample the two standard house-braised meats — spongy, flavorful chicken and savory beef, shredded to a fine, nearly fibrous consistency. Neither is particularly spicy, but both exhibit the kind of careful, finely tuned braise that takes hours to achieve. Even sides, including whole pinto beans and rice, evoke the flavors and richness of home-style cooking.

The taco combo plate at Slicks Garage in Peoria.
Patricia Escarcega
The combo enchilada plate is a kind of analog to the taco combo: three enchiladas (one chicken, one beef, and one cheese) and your choice of red or green sauce. Order it like a New Mexican, Christmas-style, with equal measure of red and green chile sauce — both are fine, ultra-savory, and not assertively spicy.

If you're a burger-lover, though, Slicks Garage beckons with a long list of specialty burgers, many of which are smothered in things like green chile and bacon. A house specialty is the Becky's Breakfast Burger, a late-morning feast of a fried egg, bacon, hash browns, and cheese, layered over a chunky, juicy patty and squeezed into a basted bun.

The burger itself is sturdy and nicely seasoned, and the breakfast meal piled on top only makes the whole thing richer, gooier, more decadent, and that much harder to eat. It comes with a steak knife, which you'll need in order to carve it into manageable bites.

Is Slicks Garage single-handedly revolutionizing the food scene in the northwest Valley? Not quite, but its unabashed nostalgia and home-style fare is making P83 more interesting, slightly more idiosyncratic, and certainly more fun.

The enchilada combo plate at Slicks Garage.
Patricia Escarcega
KEEP PHOENIX NEW TIMES FREE... Since we started Phoenix New Times, it has been defined as the free, independent voice of Phoenix, and we'd like to keep it that way. With local media under siege, it's more important than ever for us to rally support behind funding our local journalism. You can help by participating in our "I Support" program, allowing us to keep offering readers access to our incisive coverage of local news, food and culture with no paywalls.
Make a one-time donation today for as little as $1.
Patricia Escárcega was Phoenix New Times' food critic.
Contact: Patricia Escárcega
Follow:
Twitter: @piescarcega