Michael Crowe's romance with fungi began at age 15. Today, the Arizona native, also known as Mushroom Mike, is one of the most productive urban mushroom farmers in the Valley. His Southwest Mushrooms facility in Maryvale Village yields nearly 1,500 pounds of fungi per week.

Crowe says he was initially fascinated by the mushroom's ability to take in waste and grow into a source of nutrition. He began reading books about mycology, then rehydrated and germinated his first spores from grocery store mushrooms. But it wasn't until years later, in 2016, when he decided to turn pro.

“I cashed out my 401K and sold the stocks I had in my company, and started the farm,” Crowe says.

Crowe began growing mushrooms in his house before moving to the larger warehouse in west Phoenix's Maryvale Village. Currently, he grows 35 types of culinary and medicinal mushrooms that can be used in a variety of ways: fresh, cooked, dried, powdered, tinctures, and brewed into tea.


Southwest Mushrooms also supplies fungi to some of the top restaurants in the Valley, like Tratto, the larder + the delta, and the Market by Jennifer's.

Inside his warehouse, mushrooms go through several stages: germination, inoculation of grain spawn, incubation, colonization, and fruiting. The fruit is the mushrooms you see at the store. His grow tents are filled with hundreds of fruiting blocks arranged in neat rows on metal shelves. His selection of mushrooms includes reishi, maitake, lion's mane, oyster, and chestnut varieties. The aromas range from pork to vanilla, the flavors from sweet and nutty to meaty.

“Cultivating mushrooms is a balance between science and art,” Crowe says.

How do mushrooms reproduce? It all starts in a petri dish in his lab. Two spores must mate, germinate, and form a mycelium. Crowe then transfers the mycelium into a sterilized grain spawn like soft, red winter wheat, rye berries, oats, or a liquid broth such as light malt dextrose or honey. The culture takes over the grain spawn, which becomes a vehicle for the mycelium to grow and be used to inoculate production blocks. The blocks are made of oak hardwood or sawdust, which Crowe steam-sterilizes. (When growing mushrooms, it's vital to maintain cleanliness to avoid cross-contamination.)

To live and grow, the mushrooms must be placed on a material called a substrate. The substrates with mycelium, a network of fungal threads, are then moved to an incubation area where they are left to colonize. Crowe starts these rooms with high humidity (nearly 90 percent, to simulate a rainy day). As the mushrooms grow, he decreases the humidity.

Depending on the type of mushroom, colonization of the entire bag can take between two to eight weeks. Visually, the bags turn white. Then, he creates an opening in the bag and moves the blocks in one of his three grow rooms. Typically, within seven to 10 days, they are ready to harvest. (Maitake mushrooms take two weeks.)

Each fruiting is called a flush. According to Crowe, you can harvest up to five flushes from one block. He does not always attempt five flushes because the amount harvested can vary with each flush. While the first flush may yield three pounds, the fifth may produce only a quarter of a pound. 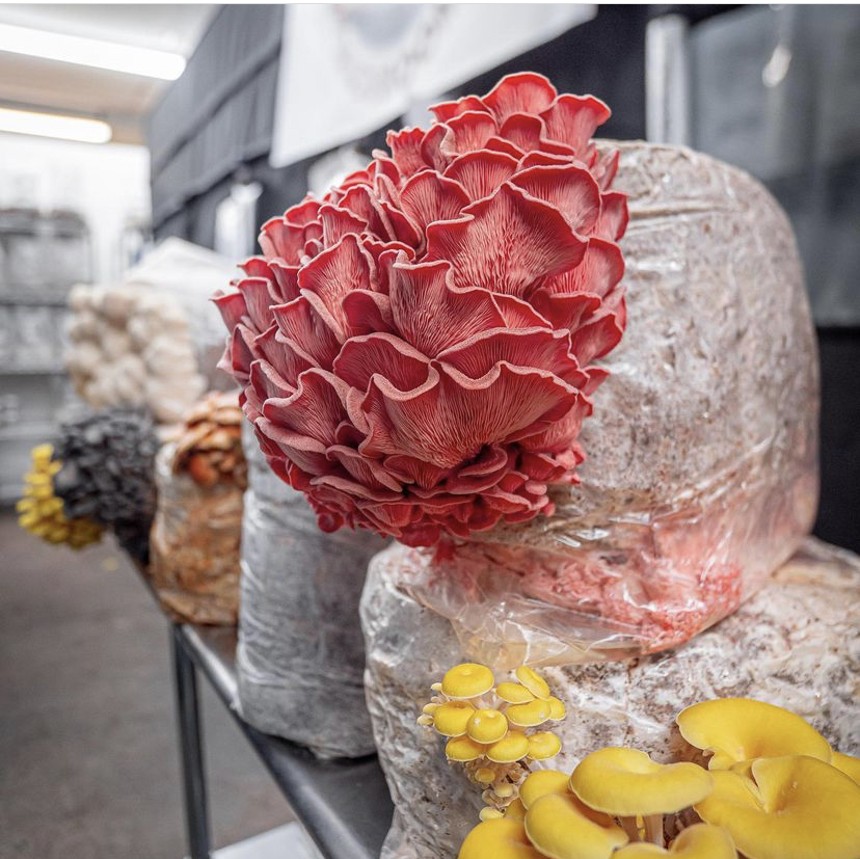 But this is another reason he loves mushrooms. “You can grow a large volume in a small space and with minimal resources,” he says.

Crowe does not grow psychedelics. He also does not cultivate secondary decomposers, or mushrooms that grow on compost or manure, like cremini, button, and portobello.

Crowe says almost all the mushrooms he grows have medicinal properties. Reishi is shown to shrink tumor growth. Lion’s mane mushrooms contain neurogenerative mechanisms and can help with memory. Ganoderma lucidum sensu stricto is known as the "mushroom of immortality" for its antibacterial, antiviral, and anti-cancer properties. Lovastati, a substance in oyster mushrooms, can help lower blood cholesterol. Oyster mushrooms can also lower blood sugar; however, the mechanism is unknown.

Crowe has a YouTube channel where he shares his extensive knowledge. You can find Southwest Mushrooms at Downtown Farmers’ Market or order online. Crowe said he hopes to sell mushrooms directly from his warehouse in the near future.

He also sells mushroom grow kits. For more information, follow Southwest Mushrooms on Facebook and Instagram.
KEEP PHOENIX NEW TIMES FREE... Since we started Phoenix New Times, it has been defined as the free, independent voice of Phoenix, and we'd like to keep it that way. With local media under siege, it's more important than ever for us to rally support behind funding our local journalism. You can help by participating in our "I Support" program, allowing us to keep offering readers access to our incisive coverage of local news, food and culture with no paywalls.
Make a one-time donation today for as little as $1.