The Best Soft Serve in Phoenix Soft serve has come a long way from your Dairy Queen days. With unique flavors, crazy toppers, cone  upgrades, vegan versions, and an explosion of color and cuteness, there’s a whole new world of cold, velvety goodness out there. Here are the ten best swirly treats around Phoenix: Rewind is the place to snap soft serve selfies.
Allison Young
Rewind
3245 West Ray Road, Chandler
480-466-0079
Most soft serve starts with a liquid base — but not at Rewind where super-premium 16% butterfat hard ice cream along with all the fixins go into a high-tech gadget armed with an aeronautic steel drill. The machine doesn’t just churn out soft serve; it “drills” it with add-ins like gummy bears, teddy grahams, cereal, and fresh fruit, for a fully infused, super-creamy blend of perfection that’s firmer than soft serve and, dare we say, more satisfying. Add in the photo-friendly interior, including a garden wall with a neon “dripp it like it’s hot” sign, and your Instagram likes are guaranteed. Add toppers like sliced banana, peanut butter sauce, gummy worms, Oreo crumbs, and sprinkles at Bristlecone.
Allison Young
Bristlecone
3301 East Indian School Road
480-239-6983
Bristlecone is a vegan one-two stop in Arcadia that also includes Beaut Burger. By all means, start with a scratch-made veg burger on a split-top potato bun paired with sweet-potato fries — but be sure to save room for dessert. Made with a creamy mix of whole-grain oats, pure cane sugar, and coconut milk, and available in chocolate, vanilla or twist, the vegan soft serve is totally swoon-worthy. And the housemade waffle cone — a slightly sweet, slight salty secret recipe that owners Kerry Lane and Ari Shapiro worked months to perfect — will have you crunching ’til the end. Snowtime’s adorable fish-shaped cones layered with soft serve are lickable art.
Allison Young
Snowtime
2095 North Dobson Road, Chandler, 480-268-7711
4905 East Ray Road, Phoenix, 480-219-9332
1919 West Main Street, Mesa (inside H Mart)
You’ve eaten soft serve out of a cone, but have you ever licked it out of a fish waffle? Snowtime serves the special Korean dessert known as ah-boong,` a cuter-than-a-cone creation that starts with a fish-shaped waffle cone and is filled with Nutella, custard, or sweet red beans and layered with a perfect swirl of vanilla, chocolate, matcha or taro soft serve. As if that weren’t eye-catching enough, the delightful displays are then topped with matcha dust, soybean powder, Fruity Pebbles, sliced almonds, coconut flakes, sprinkles, a mini macaron, strawberries, or graham crumbs for a photo finish. Cheat on the tSoynami with a swirl cone from Nami.
Allison Young
Nami
2014 North Seventh Street
602-258-6264
The tSoynamis get all the glory at Nami. After all, a blizzard of the shop's signature vegan soft serve with cookies, cake, chocolate, peanut butter, vanilla wafers, or vegan caramel is a sure hit. But don’t let the cyclones overshadow the cones. Nami's 100 percent organic soft serve is hand-mixed in-house daily and made with organic soy and coconut milk and organic unrefined sugars for a more natural sweetness, and when you order it served straight up in a gluten-free sugar cone, you really get to appreciate its rich taste and silky texture. Another winner is owner Damon Brasch’s personal favorite, the affogato: cold ice cream drowned in hot espresso and chocolate. 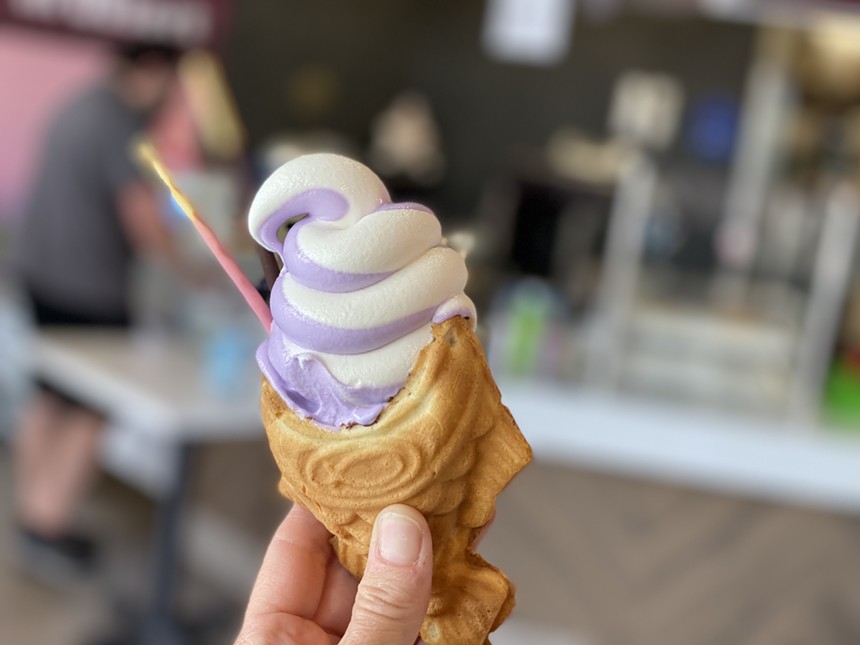 Milk and taro swirl in a fish cone from Dessert in Desert.
Allison Young
Dessert in Desert
18511 North Scottsdale Road, Scottsdale
480-597-7351
If color schemes matter to you, so will your order at Dessert in Desert. At this unique, “choose your own adventure” dessert stop, where you get to pick your base, flavors, and toppings, you could get a matcha green tea soft serve on a green cone with Pocky toppings, or taro soft serve with mochi on a purple cone, or a fish cone with custard filling, mango and chocolate swirl and sprinkles. The combinations are endless, really. The menu also includes Fruit Loops-coated cones that look like ballerinas, “Snowflake” bowls that invite slow flaked ice to the soft serve party, and Tornado deep fried potatoes, a popular street food in Korea. Topo is infused with nostalgia, from the walk-up window to the $3 price tag.
Allison Young
Topo
301 North Gilbert Road, Gilbert
480-503-3805
When in Rome, eat gelato. When in Phoenix, eat prickly pear soft serve from Topo. The iconic cone from the iconic building in Gilbert’s Heritage District — it’s the one with the walk-up window and giant gopher on top — is a local must-get. Made with real prickly pear, the pink-colored creation tastes like a cross between bubble gum and watermelon, with a sweet, slightly tangy finish. Yes, Topo has chocolate and vanilla, too, plus chocolate, lime, and prickly pear dips, but the prickly pear twist with lime dip is the way to go. 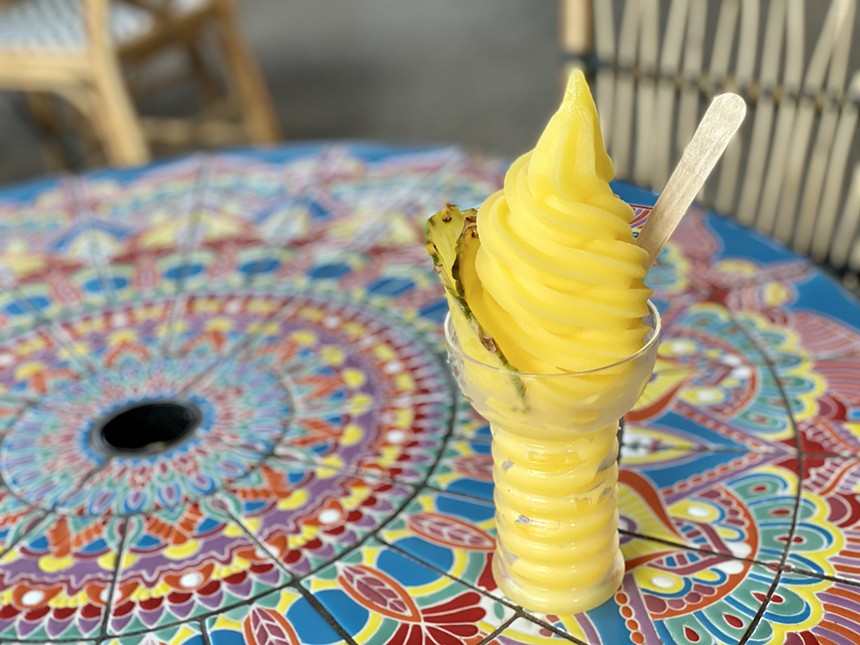 Lylo's Dole Whip without the booze is just as fun.
Allison Young
Lylo Swim Club at Rise Uptown
400 West Camelback Road
480-536-8899
No need to go all the way to Disney for a Dole Whip, not when you can get a parfait cup full of the frosty pineapple treat at Lylo Swim Club. Granted, the pool-bar version is usually infused with rum (you have to order it non-alcoholic if you want it booze-free) and served swirled to perfection and garnished with a blanket of thinly sliced pineapple and a bamboo spoon. But the juicy, tropical, dairy-free refresher still tastes like a vacation, with a splashy setting to match. The only downside? Brain freeze. Orea soft serve with Oreo crumbs in a bubble waffle at Cha Tea.
Allison Young
Cha Tea
1911 West Main Street, Mesa
480-534-1251
Get the bubble waffle with soft serve at Cha Tea, but be warned: The spongy, made-to-order waffle comes straight off the griddle before it’s stuffed with soft serve. That warm waffle/cold ice cream combo tastes divine, but it’s a ticking time bomb, so if you must snap a few photos first — can’t blame you, it's a showpiece — do it before you have a melty mess. Soft serve comes in six rotating flavors, but you can count on chocolate, vanilla, and Oreo. And since Cha Tea doubles as a boba bar, ice cream toppers go way past cookie crumbs to include fresh mango, sliced almonds, strawberry heart-shaped jelly, and boba pearls. Desert Swirl’s almond-based soft serve is creamy, dreamy. and dairy-free.
Allison Young
Desert Swirl Frozen Yogurt and Ice Cream
4273 West Thunderbird Road
602-548-0979
The vegan soft serve at Desert Swirl starts with a soy-free almond milk base that’s then mixed and flavored in-house. The shop has five rotating swirled flavors on tap daily that include vanilla and chocolate, plus a seasonal roster of key lime, pumpkin pie, Dole Whip, oatmeal cookie, and dark chocolate. There are toppers aplenty, from fresh fruit and granola to pop rocks and Reese’s Pieces. Get it in a cone, a waffle bowl or even a banana split; the taste and texture are consistently creamy and dreamy, in an I-can’t-believe-it’s-not-dairy way. Bonus: Cups, spoons and bowls are biodegradable. 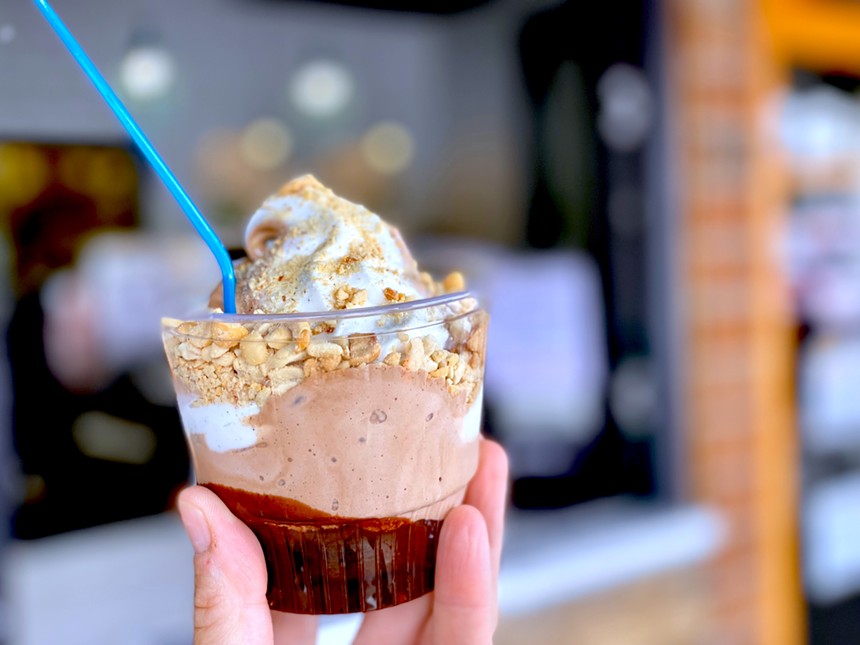 Joe's Cake Dish at Shakes & Cones tops a chocolate Texas sheet cupcake with organic soft serve.
Allison Young
Shakes & Cones
7215 East First Street, Scottsdale
480-945-0707
The soft serve at the locally owned, family-run Shakes & Cones in Old Town Scottsdale might look like McDonald’s, all spiraled into a picturesque peak, but that’s where the similarities end. The organic soft serve is made from scratch in small batches using the shop's exclusive recipe, a gluten-free, egg-free base made only with organic, non-GMO ingredients. Available in four daily flavors — vanilla, chocolate, strawberry and vegan vanilla made with coconut milk — the result is a creamy, pure lick that tastes more artisan than artificial. Get it in a hand-rolled waffle cone, a gluten-free cone, dipped in a magical chocolate shell, or in an all-organic sundae topped with homemade whipped cream and nuts.
KEEP PHOENIX NEW TIMES FREE... Since we started Phoenix New Times, it has been defined as the free, independent voice of Phoenix, and we'd like to keep it that way. With local media under siege, it's more important than ever for us to rally support behind funding our local journalism. You can help by participating in our "I Support" program, allowing us to keep offering readers access to our incisive coverage of local news, food and culture with no paywalls.
Make a one-time donation today for as little as $1.