Taco Chelo's artful interior Melissa Fossum
When you walk into Taco Chelo, Aaron Chamberlin's new restaurant on Roosevelt Row, you get a strong sense that you've entered a different kind of taqueria. The more you look around, the more the layers of aggressive, artful, carefully curated details reveal themselves.

Taco Chelo is about to open on Roosevelt Row.
Melissa Fossum
For Taco Chelo, opening Friday, March 9, Chamberlin has united Suny Santana — his longtime right hand at St. Francis — and Gennaro Garcia, a Phoenix artist heavily involved in Calle 16 the Mural Project. The 68-seat taqueria will serve a small, focused food menu and classic Mexican-style drinks until the late hours (2 a.m. on Friday and Saturday). Chamberlin is helping with early menu refinements and logistics, and then plans to fade into the background. "I want Gennaro and Sunny to be the main people," he says.

Food will be on the traditional side. Santana is the force behind a menu of five tacos, four starters, two salads, one dessert, and specials. He will pull from memories of his grandmother's and mother's cooking. (Chelo was his mom's nickname.)  Though he is from Nuevo Leon, two-and-a-half hours from the Texas border, his menu will collect from Mexico's many regions.

Tacos will be the main event. 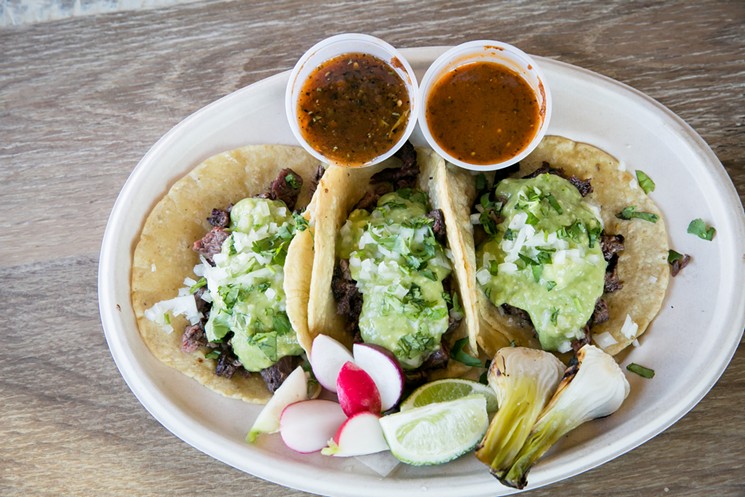 Tacos will be masterminded by Suny Santana.
Melissa Fossum
They will come on corn and flour tortillas. Corn tortillas will begin as nixtamalized yellow corn formed into masa by a local artisan. On-site, Sutana and his chefs will press and griddle tortillas.

There will be three meat tacos, one fish, and one vegetable. A carnitas taco will come with guacamole, onion, and cilantro. For carne asada, skirt steak or rib eye will be sizzled over a mesquite charcoal grill. Whole heads of beef will be steamed in banana leaves and shredded to make barbacoa for tacos that will include, Santana says, "tongue, cheek, lips ... everything in the head."

The vegetable taco will morph seasonally, and the fish taco will be made from a rotating white fish and pickled onion, cabbage, habanero, chile crema, and pico de gallo.

A spread of food and drink at Taco Chelo.
Melissa Fossum
Taco Chelo will have the farm-driven focus of Chamberlin's other spots Still, the taqueria is a strong movement away from the cuisine of his first three restaurants.

"I never wanted to be a gringo and have a Mexican restaurant," Chamberlin says of opening a taqueria. "But I have these two friends who are immensely talented, and I knew if we all got together and did our part, we could create something special."

Mugs have been designed by local artist Gennaro Garcia.
Melissa Fossum
The second friend, Garcia, certainly does his part.

A native of Sonora, Garcia designed the space. You may have seen his colorful art emblazoned on city walls, his paintings and ceramics in galleries around town. 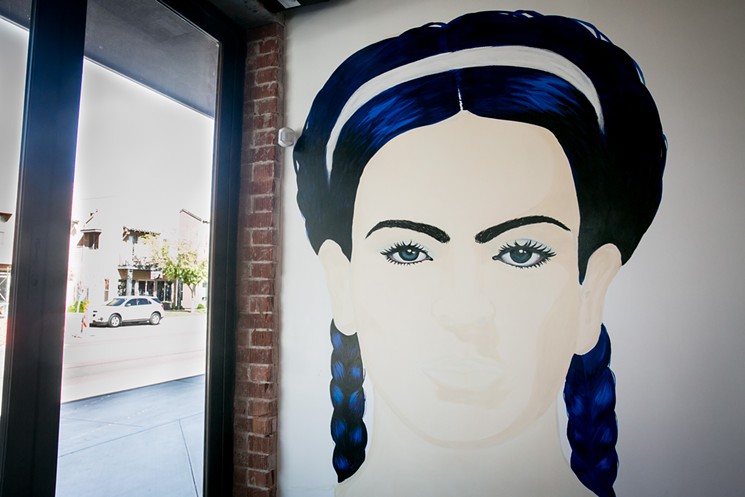 A projector will beam changing designs onto Garcia's Frida Kahlo painting.
Melissa Fossum
A faux, roughshod, mint-green bar back highlights the room. A tangle of industrial-elegant rafters and cool lights with sleek metallic shades hang above. The kitchen, in the far back corner, hums in a shipping container. Garcia masterminded the brick accents, the design of the tiles; he designed the mugs, created the art installations, and painted the visage of Frida Kahlo, onto which a projector will beam changing designs.

The bar program is simple and founded on the expected agave-based spirits. There will be a margarita, frozen margarita, michelada, paloma, and sangria. The wine selection with have Mexican and Arizonan options, and so, depending on the season, will the draft beer roster.

Lights for days.
Melissa Fossum
Taco Chelo is a striking, highly original space that could become a fixture of the downtown scene. A wraparound patio will have, by day or by night, a view of the towers of downtown Phoenix. From that patio, you'll also have a view back into the kitchen, where, one hopes, Suntana will work magic slinging tacos, chicharrones, and frijoles charros for the hungry masses.

Check out more shots from inside Taco Chelo.