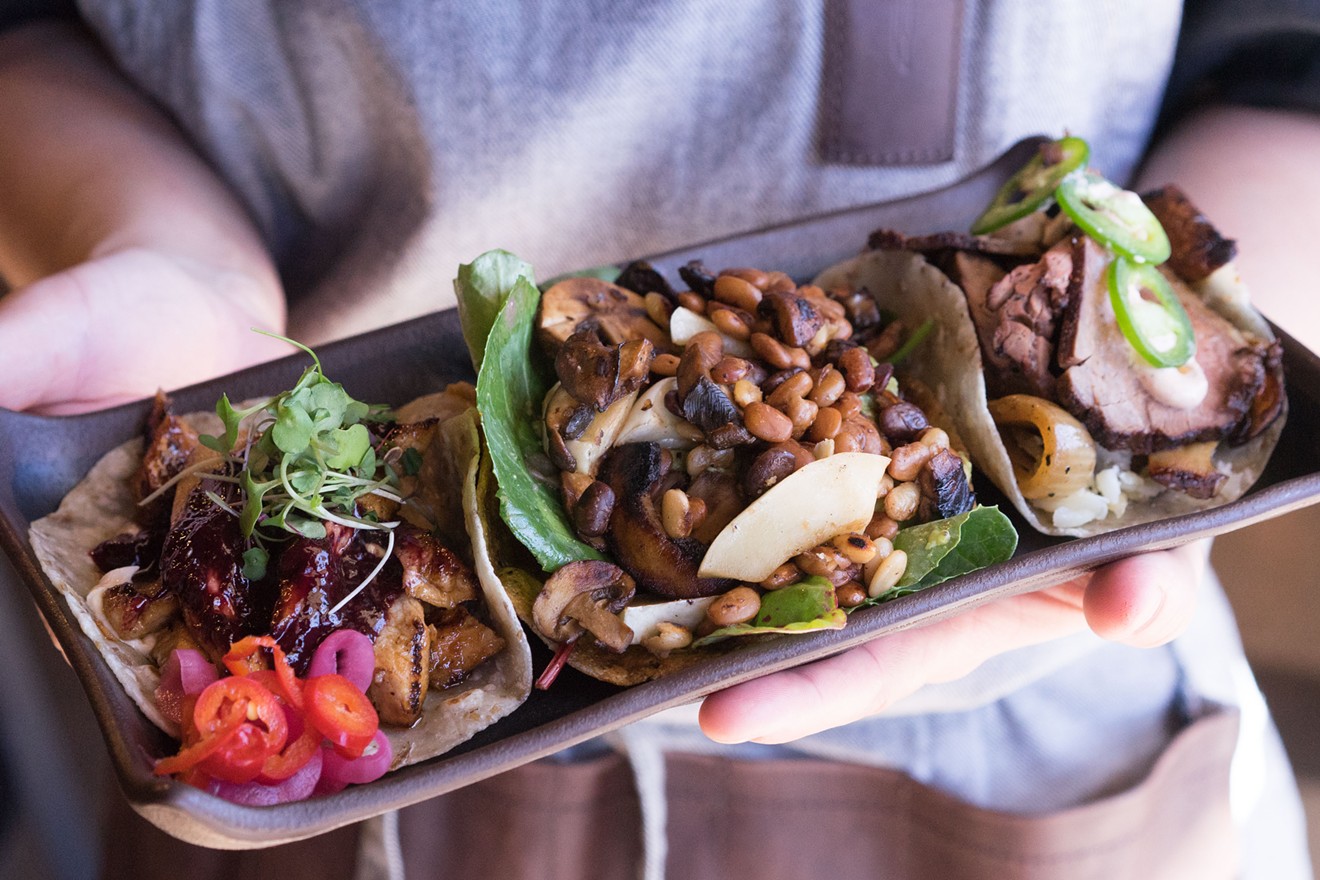 
The story is familiar one: Helio Basin Brewing Company, off at the southern edge of Arcadia, is located where hidden gems in our city so often are: in a strip mall. In this case, right next to a Red Wing boot store.

Outside, the lettering atop the windows reads: “Hand Crafted Brews” and “Authentic Arizona Food.”

You’d expect the former, which Helio Basin has delivered on since they opened about a year ago. At the three-month mark, they were included in BeerAdvocate’s annual ‘Class Of’ list and named as one of the 34 best new breweries in the country for 2016, citing their immediate grasp on quality control that eludes most new brewers for years, if not indefinitely.

The latter — the “Authentic Arizona Food” — came as a pleasant surprise in a world replete with ubiquitous bar foods such as cheese pretzels, beer cheese, and burgers.

To be fair, there are chips and dip and chicharrones, perhaps the quintessential bar food, on the menu. However, at Helio Basin, the dip is made using pasilla peppers and nopales, the green and meaty interiors of cactus pods.

The tostada is equally unusual, beginning with a corn tortilla made from colorful, local Native American corns and filled with chickpeas from Valley Pima Indian farmer Ramona Button that are pureed and fried in place of refried beans. Their hyper-local taco is finished with a topping of fire-roasted onion, prickly pear grapes, and the option to add wild game sausage.

Stanger forms balls of dough made from wheat flour and spent grain from their brewery, which she puts in a special tortilla press that both flattens and par-cooks the rounds to help them keep their form and cook quickly on the stovetop.
Shelby Moore
click to enlarge

Chef Tamara Stanger makes flour tortillas from wheat and spent grain as well as corn tortillas from Valley-grown American Indian corn.
Shelby More
Chef Tamara Stanger saysthat their team decided to highlight tacos on the menu because they were a blank slate that fit into the bar food atmosphere, food you could eat with your hands, but which allowed Stanger to explore Arizona-specific ingredients in a format that would be familiar and friendly to any patron of the Southwest.

“When when they opened their brewery, they wanted something that’s really easy and approachable,” Stanger says. “They said to make tacos, so I said let’s throw in all of these ingredients that you can really only find around Arizona and you can’t find anywhere else.”

That being said, her tacos escape the genre completely. She serves two types of tortillas and both are unusual. The corn, mentioned above, is made with a yellow Native American-gown Pima varietal from here in the Valley that she blends with chiles. The wheat tortillas are blended with spent grain from the brewery, which lends them a nutty and earthy flavor. While one taco might be topped with coffee-rubbed tri-tip, another will be filled with chicken coated in a mesquite honey glaze, made with sweet mesquite flour that Stanger stocks up on when the flour is harvested.

Left: the tepary bean and seasonal vegetables are sauteed for vegetable tacos. Right: Tacos are plated for the brewery's Taco Tuesday special, which lets you choose two tacos and a beer from their list.
Shelby Moore
She also makes a seasonal vegetable taco, using the likes of roasted summer squash from Crooked Sky Farms, mushrooms, and local greens, starring tepary beans, a variety that has a long history in this region of the Southwest and which almost went extinct when they fell out of popularity during the era of convenience foods.

The beans, small, brown, and nutty, along with some of their colorful cousins (such as the pink tepary bean) are being farmed and dried for retail by Ramona Farms, one of the few companies to create a dependable business selling native Arizona foods. Stanger loves their white beans, which she says taste like cheddar, and she uses their red and blue corn varietals for tamales, which are an occasional special addition to the menu.

Raised Utah and having cooked in multiple kitchens across Phoenix before landing at Helio Basin, Stanger says that she didn’t initially seek out Arizona ingredients.

“I found some ingredients at a farmers' market and I wanted to know more. As the opportunity grew, I wanted to find out as much as I could,” Stanger says. “People started to introduce me to ingredients I had never even heard of.”

These days, she works with foragers who are trying to find restaurants interested in carrying their products.

“I love working with new ingredients.”

Stanger says that most of their ingredients, because of very short growing seasons, usually end up in limited daily specials, either in entrees or taco form.

Chef Tamara Stanger is originally from Utah, where she grew up around the kitchens of the restaurant business.
Shelby Moore
Our Taco Summer picks so far: