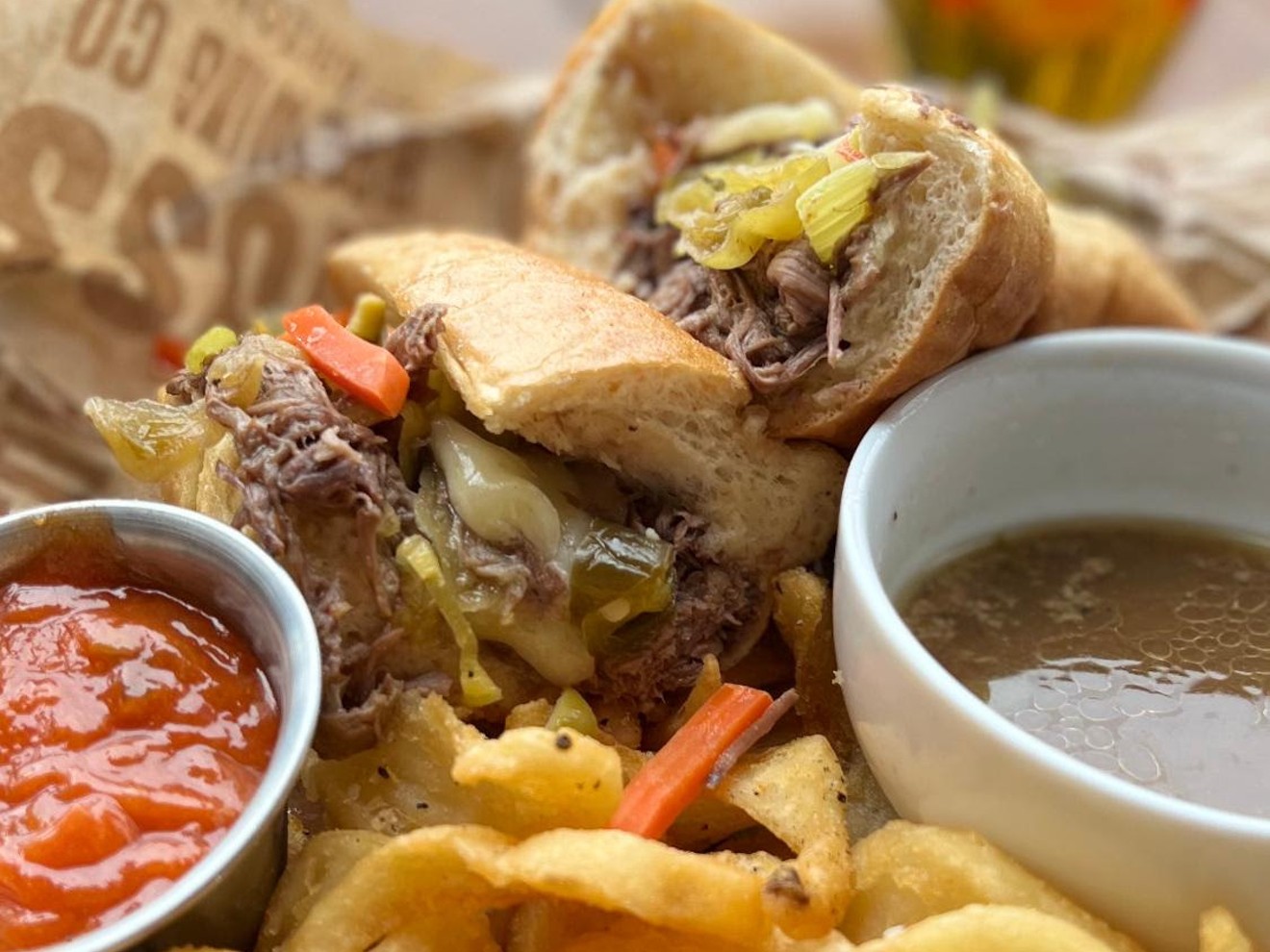 The downtown Phoenix Huss Brewpub will serve an Italian beef sandwich, inspired by The Bear on FX, while supplies last. Huss Brewing Co.
Riding on the popularity of FX's hit show The Bear, a dramedy about the cutthroat restaurant industry told through a small Chicago Italian beef joint, Huss' Downtown Phoenix Brewpub is serving its own rendition of the sandwich.

The classic Chicago creation is comprised of a crusty roll stuffed with slowly-braised thin-sliced beef, sweet peppers, sharp provolone cheese, and giardiniera, an Italian relish of pickled veggies. It's available for $15.90 during lunch and dinner at the downtown brewpub inside Phoenix Convention Center.

A pint of the brewery's Scottsdale Blonde pairs nicely with the spicy sandwich, which is served with half-moon-shaped crispy and fluffy sidewinder fries and house-made giardiniera ketchup.

The Italian beef sandwich is thought to have made its way to Chicago in the early 1900s, when Italian immigrants slow-roasted tough meat in spicy broth to tenderize it, then heaped it atop crispy bread rolls.

The sandwich has undergone a recent revival thanks to The Bear. In the hit show, Jeremy Allen White and Ebon Moss-Bachrach lead a diverse cast through the highs and lows of a small Chicago restaurant struggling to find its footing after its original owner, Michael "Mikey" Berzatto, played by Jon Bernthal, committed suicide.

When White's character Carmen "Carmy" Berzatto leaves his high-brow restaurant job to take over his brother's hole-in-the-wall Italian beef eatery, he finds his hands full. Carmen sets out to improve the worn-down restaurant alongside Ayo Edebiri playing Sydney Adamu, a bright-eyed Gen-Zer who refuses to accept the toxicity and hierarchy of the kitchen as status quo.

Moss-Bachrach plays Richard "Richie" Jerimovich, a rough-around-the-edges yet charming Chicagoan who worked the front of the house under his best friend Mikey, but is resistant to the changes taking place under Carmen's leadership.

The show is a dark comedy about the challenges of the restaurant industry, demonstrated through screaming chefs, ambitious recipes, and neighborhood tough guys who are used to doing their shady business right next door.

It speaks to the way the industry is changing from strict hierarchical structures to more democratized methods of running ever-hot kitchens. And it does so all through the Italian beef sandwich, a classic yet humble recipe that can satiate even the heartiest appetite. Get your hands on one while you sip on a brew and give thanks you don't have to withstand the heat of the kitchen to savor the dish.

255 East Monroe Street
602-607-5370
hussbrewing.com
KEEP PHOENIX NEW TIMES FREE... Since we started Phoenix New Times, it has been defined as the free, independent voice of Phoenix, and we'd like to keep it that way. With local media under siege, it's more important than ever for us to rally support behind funding our local journalism. You can help by participating in our "I Support" program, allowing us to keep offering readers access to our incisive coverage of local news, food and culture with no paywalls.
Make a one-time donation today for as little as $1.