Teaspressa uses coffee methods to brew tea. Meagan Mastriani
What if one drink could offer both the energy boost of coffee and the health benefits of tea? Teaspressa founder and barista Allison DeVane has tried to answer this question with the launch of her hybrid beverage brand in 2015.

DeVane developed a way to make tea that resembles coffee-brewing methods, including using a French press or moka pot to prepare “shots” similar to espresso. Some of these concentrated tea drinks have the same level of caffeine as coffee, she says.

On March 24, Teaspressa launched its first brick-and-mortar cafe in Arcadia. It’s a bright and airy 500-square-foot space attached to an art gallery and across from a modeling agency. Signs on the crisp white walls urge visitors to use #teaspressa and #cestlatea for a chance to be “featured” on the company’s immaculate Instagram feed. They provide plenty of photo ops, with lush leafy plants; not just one, but two neon signs; and faux marble tabletops. 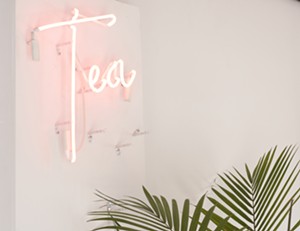 Perhaps the most popular item, the London Fog, is sweet and floral with its Charles Grey black tea and all-natural vanilla and lavender elixir. Each signature drink costs $5 for a regular size or $5.50 to upgrade to large. Adding more flavor drops or sugar cubes infused with rose, salted caramel, or other ingredients costs an extra 25 cents each.

The cafe also offers traditional drinks like mochas, lattes, and americanos with the choice of a tea shot or espresso base. There’s a glass case with pastries from Phoenix-based Bakeshop, as well as a large shelf where visitors can grab jars or bags of tea, sugar cubes, elixirs, and even custom tea-scented candles and “C’est La Tea” swag.

Opening this shop is the culmination of years of hustling and refining Teaspressa’s products. DeVane, an Arizona State University graduate, got her start pedaling a tea cart around town giving out free samples, until she had the chance to pitch her idea to ABC’s Shark Tank in 2016. The judges did not give DeVane a deal, but the publicity helped her business grow.

She ramped up online sales, partnered with Ruze Cake House to open a shared space in Old Town Scottsdale (Teaspressa no longer operates there), and set up a self-serve kiosk at Taliesin West.

At last, Teaspressa is ready to stand on its own and start expanding throughout the country. The flagship Arcadia location will serve as a model for future shops in downtown Phoenix and Ann Arbor, Michigan, with hopes of eventually adding more. DeVane seems intent on building an empire, and she probably won’t stop until her chic aesthetic and philosophy of “luxurious self-treatment” spreads far and wide.