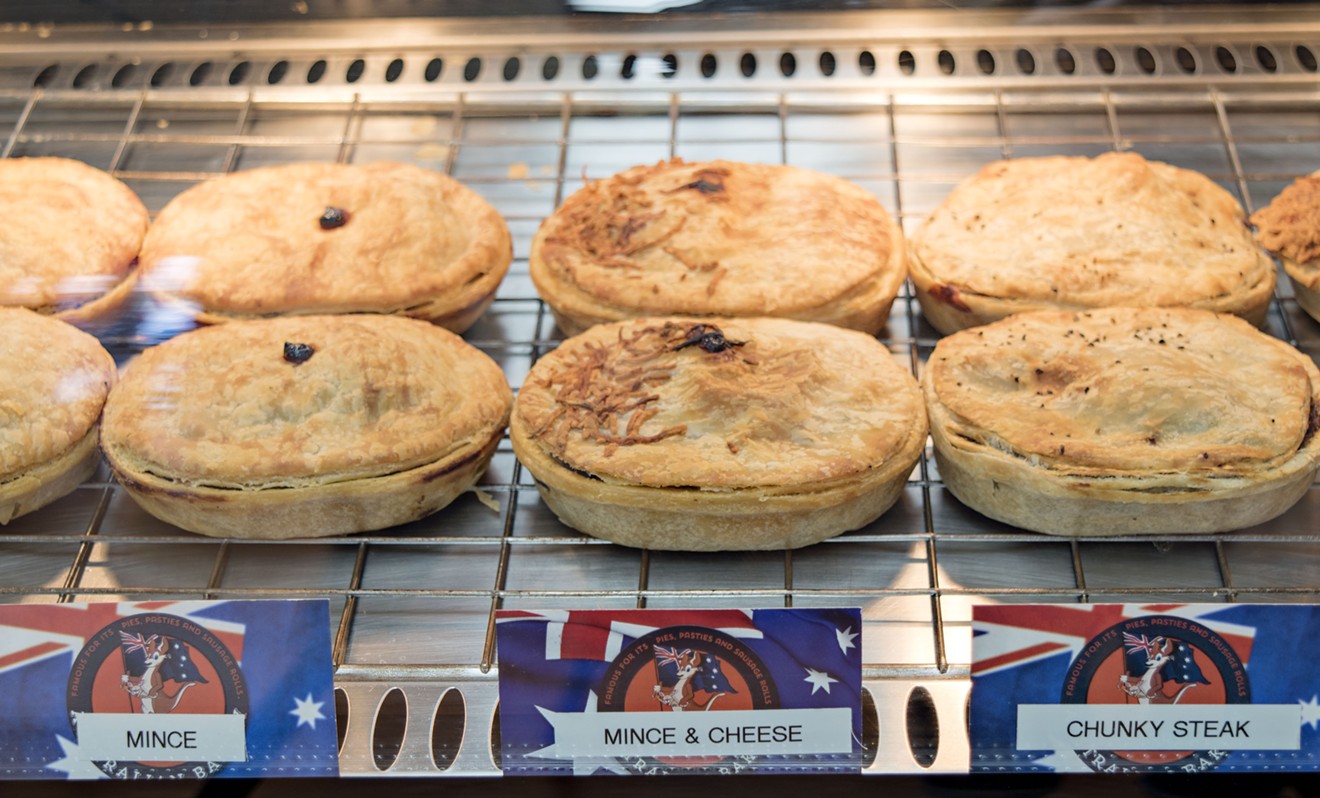 A selection of meat pies at The Great Australian Bakery. Jackie Mercandetti


The Great Australian Bakery is easy enough to spot amid the crowded souvenir shops and art galleries of Old Town Scottsdale — just look for the large Australian flag hoisted proudly on Main Street. There is only one, and if you raise your head high enough, you might also spot a red-and-white sign that reads: “Stop By For a Pie,” with a little red arrow pointing down toward the bakery’s two main doors. If the phrase “meat pie” resonates with you in any meaningful way, you’ll probably want to listen to that sign.

The counter-service bakery and bar, which has been open for a little more than a year now, is situated inside a sprawling food-court-like space. The large space is casually divided in half between a bakery on one side, and a bar on the other. The bar — an employee told me recently that it’s called the Billabong Bar — is a sports loungey spot where you can sip on a cocktail, beer, or an Australian specialty like a tall glass of Lemon Lime & Bitters, which here is essentially a glass of Sprite gently spiked with bitters.

Next to the bar, there’s a glass display case where you can purchase Australian candy and other imported food products — a jar of Vegemite, perhaps? In any case, if you are an Aussie expat living in the Arizona desert, The Great Australian Bakery is a good place to find a box of kookaburra black licorice or sip on some Bundaberg Ginger Beer. For those of us not from the land down under, the bakery and bar cheerfully indulges in a small amount of Aussie kitsch. There is, for example, a menagerie of oversize kangaroo and koala bear stuffed animals decorating the dining area.

From Sydney, with love.
Jackie Mercandetti
The main draw at The Great Australian Bakery, though, is the well-stocked bakery case, which is sort of a carb-lover’s version of paradise: It’s lined with neat rows of meat-stuffed, golden-brown pies and various other fresh-baked treats.

Australian meat pies are not exactly abundant around metro Phoenix, but in Australia, the meat pie is an iconic snack. Owner Laurence Lindahl, a Sydney native and a longtime Valley resident, got the idea for bringing meat pies and other popular Australian snacks to Arizona a few years ago, when he traveled to Australia to visit his ailing father.

Lindahl worked closely with Aussie baker Daniel Rose to develop the menu for the Scottsdale bakery, and Rose traveled to Arizona expressly to train the local staff on the methods of preparing and baking Aussie-style meat pies, pasties, rolls, and pastries. Pretty much everything on the menu is prepared on-site daily.

Most of the menu is devoted to meat pies, which are roughly oblong in shape and about the size of the palm of your hand.

A highlight is the cottage pie, which is similar to a shepherd’s pie, but instead of the mashed potato crust, the pie is topped with a generous scoop of creamy, homemade potato mash. Inside, the pie is crammed with minced beef, carrots, onions, and peas, all of it pleasingly dressed in a light and savory tomato sauce.

I enjoyed the red chicken curry pie packed with marinated hunks of chicken, onions, bell peppers, and mushrooms, everything wrapped up in the perfume and flavor of a wonderful coconut curry sauce. After eating a dozen or so meat pies at The Great Australian Bakery, this is the one I can’t stop thinking about.

If there is a less successful pie, it’d be the chunky steak pie, which is stuffed with onions and thick hunks of gravy-laced, marinated steak. The large chunks of sirloin make for an unwieldy pie that can be a little tough and chewy at times.

The success of any hand pie, of course, rests heavily on whether the pastry shell is good enough to eat all on its own. Here, it almost always is. The meat pies are encased in sturdy yet light pastry shells, constructed with traditional pie bottoms that flare out to a vaguely crisp and buttery golden crust. Every pie has a flaky, doughy lid that you can lift to reveal the meaty fillings.

The bakery also carries a small selection of pasties, with options that include rosemary chicken, beef, and a veggie pasty stuffed with chopped carrots, squash, potatoes, and other root vegetables. The veggie pasty, on a recent visit, was tender and flaky, but also a touch on the oily side.

There is a whole bakery case at The Great Australian Bakery reserved especially for desserts, and apart from the lineup of often-wonderful meat pies, this is really where the bakery shines.

It’s worth making a trip to Old Town, even during peak tourist season, just to feast on one of the bakery’s immaculately constructed Lamingtons. This perfectly square vanilla sponge cake, dipped in chocolate ganache and rolled in coconut, is somehow both airy and moist. And it’s deliriously good.

But you should probably not leave without taking home a couple of Anzac biscuits. This hearty, sweet oat cookie was popularized by the care packages delivered to Australia New Zealand Army Corps (or ANZAC) soldiers during World War I. Anzac biscuits are made without eggs, and have been proven to travel well across long distances. Chewy, rather dense, extra-buttery, crackling with the comforting flavors of oats and coconut, a small box full of these might be the ultimate memento from an afternoon spent at The Great Australian Bakery.