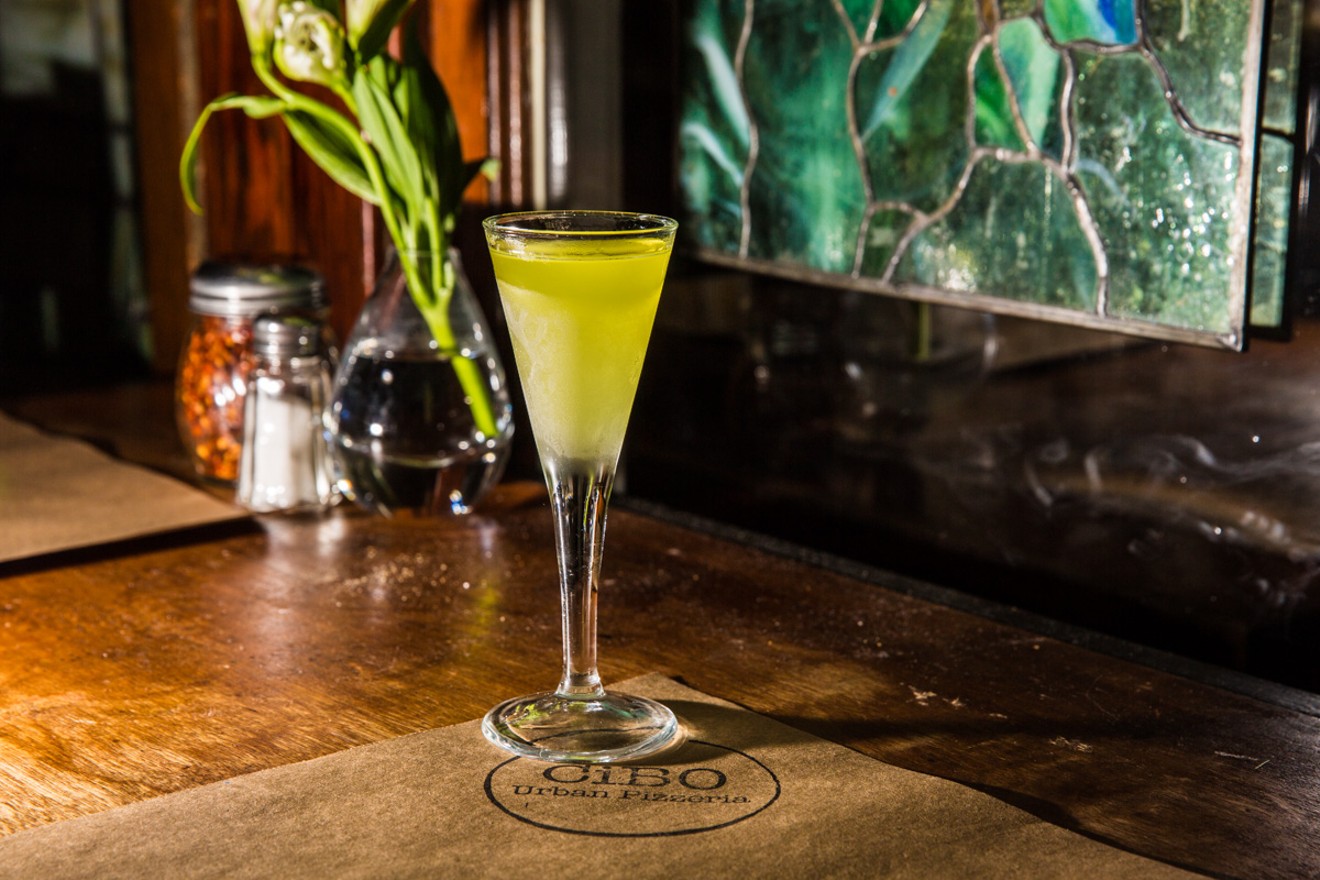 This delicious warm-weather sipper is ideal during all eight months of the Phoenix summer. Jacob Tyler Dunn
Welcome to The Essentials, our catalog of indispensable and quintessential Phoenix food and drink. From now until May, we'll be sharing 50 dishes, drinks, and food experiences that make up the culinary backbone (and personality) of metro Phoenix. This list is highly eclectic, mixing classics with newer and lesser-known favorites. But all The Essentials have one thing in common: We think they're required eating (and drinking) in metro Phoenix.

Up next, the limoncello at Cibo Urban Pizzeria.

Many restaurants in the Valley serve beverages that are made on-site, but the house-made limoncello at Cibo Urban Pizzeria puts the attempts of even the coolest celebrities (we’re referring to the now defunct Danny DeVito’s Premium Limoncello Original) to shame.

Limoncello is an Italian lemon liqueur, meant to be sipped after a meal as a digestif. The almost glowing yellow liquid is served chilled, and is made at the historic Italian restaurant at Fifth Avenue and Fillmore Street with lemon, sugar, water, and grain alcohol at $5 a pop.

Chef Guido Saccone has been making limoncello at Cibo since it opened in 2005, using the same recipe from his family in Italy. The lemon rinds are removed carefully and cured in the grain alcohol for two weeks. The alcohol is then drained and filtered from the lemon, and added to a simple syrup made with sugar and water.

Cibo in downtown Phoenix creates the perfect atmosphere for sipping an Italian liqueur.
Jacob Tyler Dunn
If you’re looking for the perfect environment in which to sip this splash of fluorescent yellow liquor, Cibo is the place.

The bustling little house-turned-restaurant is set inside a 1913 bungalow that hasn’t left much of the house part out of the décor. Framed art adorns the exposed brick walls, chairs scoot across the hardwood floors, a fireplace crackles and warms, and little bowls to large vases of fresh flowers decorate the bar, mantle, and high-top tables, and that’s just inside.

Outside on the three patios, the bistro and family tables sit beneath soft string of lights wrapped in the trees, garden lattices, and posts throughout the yard. Music – sometimes performed live in a corner of the courtyard – hums along softly over the chatter of diners and clinking of dishes coming and going. There’s also the adorable Carriage House for private parties.

Cibo is known for its Neapolitan pizza, and your serving of limoncello can follow a helping of pizze rosse, pizze bianche, salads, antipasti, or house-made pasta (served after 5 p.m. daily). You can also pop in after dinner elsewhere, and grab a seat at the bar for a quick after-dinner sip of limoncello.