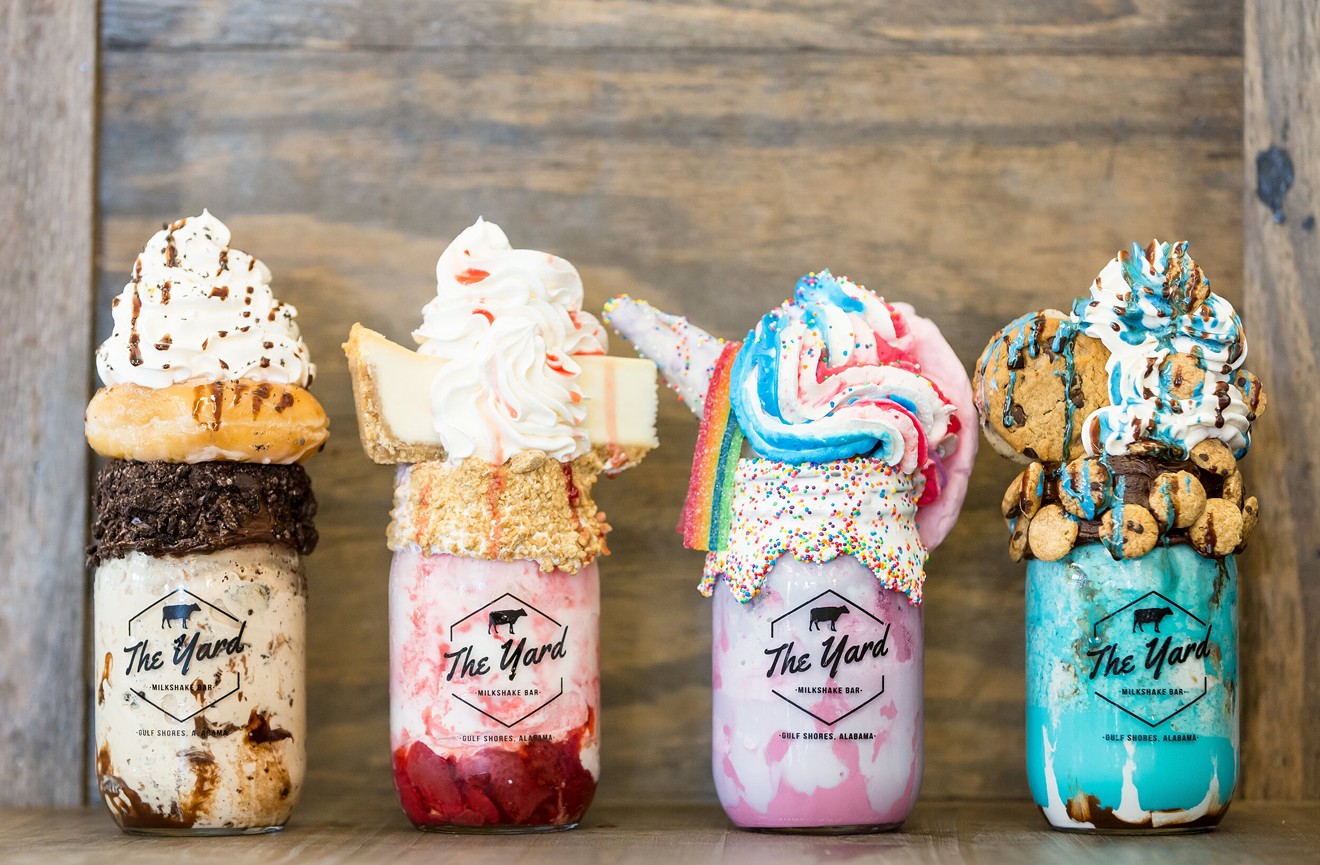 I'll have the shakes. courtesy The Yard Milkshake Bar


I chatted up a little boy at The Yard Milkshake Bar the other day.

“What are you eating?” I asked, pointing to the towering confection in front of him.

He hitched up his right shoulder to shield my view of the dessert he was mauling.

“Sorry,” I said to his mom. At least I think it was his mom. His nanny? She looked like all the blond-headed cheerleaders who called me a fag in high school.

“He has a thing about his food,” she whispered, then turned to the kid. “Derrick, tell the man what you’ve got there.”

“Make the man go-o-o-o-o-o-o!” Derrick bellowed, his mouth full of what looked like blue cake frosting. The table was littered with brightly colored cake sprinkles.

“It’s the one with the brownie,” the young woman explained, then shrugged. She was seated behind a cinnamon roll, which topped the milkshake before her.

“Mine has Cinnamon Toast Crunch,” she offered, perhaps because Derrick had been such a little bitch to me. “Want a bite?”

And then she laughed in a way that made it clear she didn’t want me standing any closer to her, please, so I smiled really big and headed to the counter to order.

“I’ll have the one with the brownie,” I said. “And the Camelback Mountain.”

I squinted at the menu behind the counter. “Also the Doughnut Touch My Coffees and Cream.” It was hard to say that, for a couple different reasons.

“Are those for here, or to go?” the nice young woman behind the counter asked. I glanced over at Derrick.

“To go,” I practically yelled.

Back home, I ate milkshakes and read up on The Yard Milkshake Bar. There wasn’t much to learn; apparently, a nice young couple in Alabama named Logan and Chelsea Green decided that milkshakes piled with other stuff was what was missing from the culinary world, and so about four years ago they launched The Yard. The franchise has grown to include seven locations, most recently the one wedged into the hubbub of far-downtown Phoenix, at 50 W. Jefferson Street, Suite 120.

These are not ordinary milkshakes. These are I-just-smoked-a-pound-of-hash-and-invented-a-dessert milkshakes. If drag queens were milkshakes, they would look like the creations I brought home from The Yard.

In the parlance of the Greens, these are “crazy specialty milkshakes.” They’re served in mason jars and have cheerful names like The Cereal Killer (marshmallow ice cream infused with Fruity Pebbles, its jar rolled in Fruity Pebbles and topped with a Rice Krispies treat made from Fruity Pebbles) and Cookie Butter Me Up (cinnamon-bun flavored ice cream rolled in cinnamon sugar and Cinnamon Toast Crunch — the Greens are big on breakfast cereal — and whipped cream into which an entire cinnamon roll has been jammed). Several of The Yard shakes come in colors so vivid, they can be eaten in the dark.

The three I ordered were delicious. Each was less a milkshake than a soft-serve ice cream, and despite the litany of ingredients, I somehow was able to taste each flavor.

The Mint Green Monster was mostly chocolate mint chip ice cream, its jar rolled in crushed Oreo cookies. The brownie jammed on top was moist and cakey and covered in marshmallow fluff.

The Camelback Mountain, a Phoenix exclusive, looked like a Mardi gras float but contained the simplest and most complementary flavors — orange ice cream, whipped cream, and a star-shaped chocolate cookie.

The Doughnut Touch My Coffees and Cream was my favorite, though by the time I got to it — perhaps needless to say, I didn’t eat all of any of these; to do so would have resulted in a diabetic coma — I was groaning. There was no breakfast cereal in this one, just a nice, rich coffee ice cream and more crushed Oreos, whipped cream, and a drizzle of chocolate syrup. I took a bite of the full-sized glazed donut plopped on top; it was light and airy and proof that donuts served with ice cream sounds like a good idea but is not.

The Yard also sells edible cookie dough and do-it-yourself milkshake kits that you can order online and make at home. This came as a relief, because I very much wanted to try the Greens’ Salted Caramel Cheesecake and the Old School Banana Split, which features a full-size banana, natch. I liked the idea of receiving a milkshake in the mail, especially since it meant I didn’t have to risk bumping into Derrick again. Kids can be such assholes about ice cream.
KEEP PHOENIX NEW TIMES FREE... Since we started Phoenix New Times, it has been defined as the free, independent voice of Phoenix, and we'd like to keep it that way. With local media under siege, it's more important than ever for us to rally support behind funding our local journalism. You can help by participating in our "I Support" program, allowing us to keep offering readers access to our incisive coverage of local news, food and culture with no paywalls.
Make a one-time donation today for as little as $1.