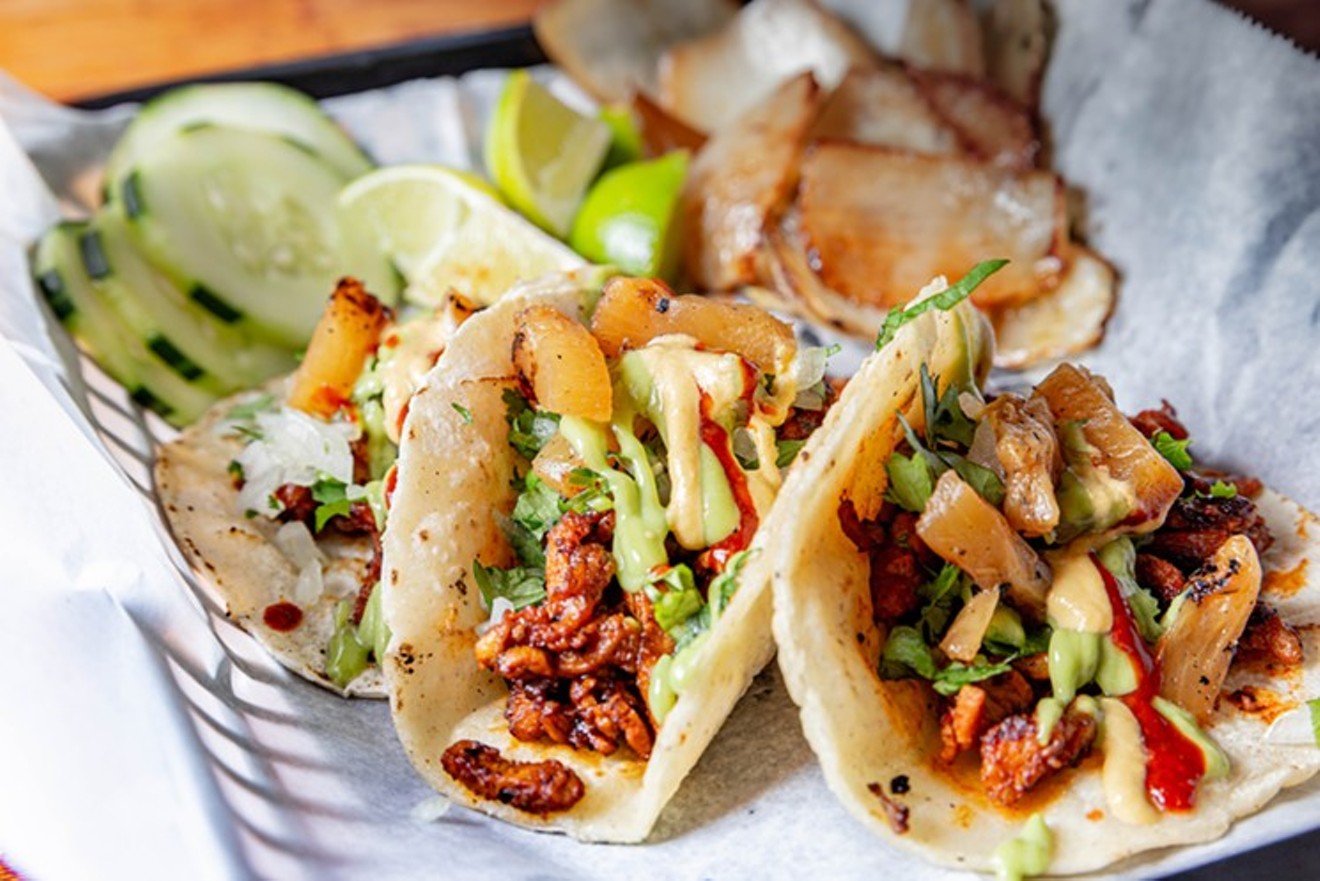 Phoenix covers 517 square miles. Once you add in the outlying towns, we have a truly massive sprawl in the style typical of Southwestern cities, many of which took shape in the age of the car. This means, too, that we have plenty of space to spread restaurants and bars through. Here are a few of my favorites, highly underrated eateries that I've enjoyed visiting recently. 909 North 1st Street (inside Palabra)
This glass-paned kitchen tucked inside of the futuristic, right-angled Palabra isn’t a hidden gem, seeing as it serves a tight, ever-evolving menu of immaculately sourced and plated Mexican food in the heart of downtown Phoenix. It has a cult following. It should have a wider following and be in more conversations about our city’s best Mexican food. The kitchen takes highly precise aim and doesn’t miss. Pozole hits all the homey, herby, spicy, warmly aromatic notes. Ceviche is wildly fresh. You can sip natural wine beside barbacoa tamales pressed from heirloom blue corn masa. The earthtone plateware, sculpted by Miro Chun, feels ancient but starkly modern, mirroring the food. 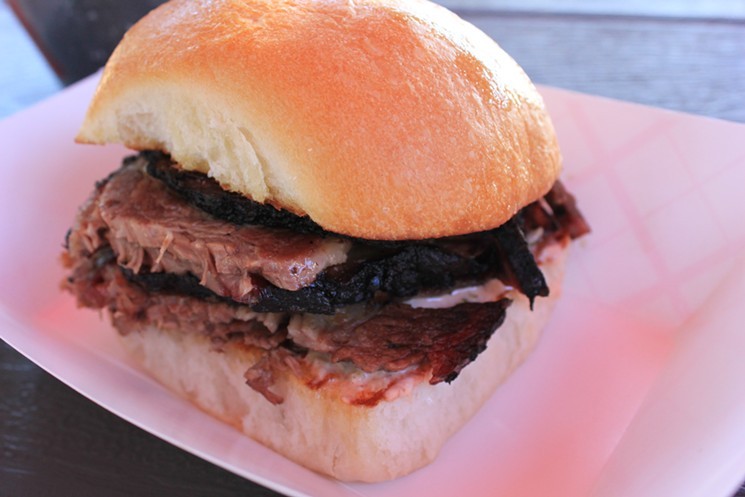 3434 North Val Vista Drive, Mesa
What would you expect to find in a Mesa orange grove? The answer for one particular orange grove, if you have been to Jalapeno Bucks, is very good barbecue. The Burdens incorporate Arizona elements into their smoked meat tradition, like tortillas, burritos, and salsa. The meats served plain-old-tray-style are solid, including a melting brisket and a top-notch pulled pork smoked for a whole 24 hours. The brisket is even better as burnt ends, meaning the charred, fat-gushing ends and bits lopped off when slicing neat lengths of meat. And yet, there is another gear: brisket might be best here in sandwich form. Like to live dangerously? Try the brisket, peanut butter, and jelly. A tower of bourek from Balkan Bakery
Chris Malloy

1107 East Bell Road, Suite 16
In our desert land of panaderias, drive-worthy French viennoiserie (if you know where to look), and quality artisan bread, North Phoenix’s Balkan Bakery ranks among our very best. Yes, there are dark rye breads, braided circular djevrek, and cevapis. But this peaceful morning destination for baked goods, helmed by the Osmic family, peaks with its bourek. Boureks at Balkan Bakery are a kind of circular stuffed bread made up of a single handmade phyllo dough tube coiled in on itself in one delicious spiral, like a tightly wrapped hose. Pealed freshly of the oven lightly brown and soft-yet-flaky, these boureks are filled with cheese and spinach or meat. Bites bring a symphony of textures and hearty flavors. One bourek is substantial enough to be a meal. This is homestyle perfection, just what you want in a bakery. 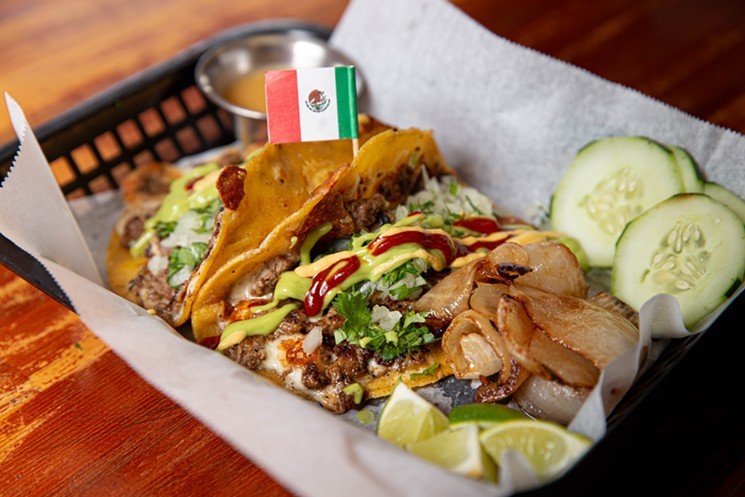 12102 West Thunderbird Road, El Mirage
We’ve covered Edson Garcia’s way-out-west gem, and yet it remains underrated. La Bamba belongs in the top tier of greater Phoenix taquerias, full stop. Beyond the quality of tacos, there is magic here. It’s some combination of the hidden menu items, insane horchata, friendly banter from Edson as he works the plancha, the comforting vibe of the restaurant, the tide of regulars, and the creative culinary decisions. Garcia, for instance, stripes certain tacos with three kinds of salsa, each a different color. For his al pastor, very possibly the best in town, he uses pork belly that marinated in house=made pineapple vinegar. La Bamba is in the top tier, yes, but also in its own league. Frybread smothered with red chile from The Stand.
Chris Malloy

4020 North Alma School Road, Scottsdale
A meal at The Stand is an experience completely opposite the plasticity, marketing oversaturation, and Instagram vapidness that have become exhausting hallmarks of dining today. Made of cactus ribs built on earth of the Salt River Pima Maricopa Indian Community, this roadside stand exists in a more honest universe. Run by the Washingtons, The Stand doles plain, sweet, and savory frybread, some served with a rich dark red chili. You order. You watch the frybread made: dough molded and bathed in oil, then forked out soft and brown and lacy. Eat it standing right there in the desert, surrounded by furrowed green crop fields. Sit on a stump. Look at the sky, the familiar parched mountains ringing around. Eating doesn’t get much better.
KEEP PHOENIX NEW TIMES FREE... Since we started Phoenix New Times, it has been defined as the free, independent voice of Phoenix, and we'd like to keep it that way. With local media under siege, it's more important than ever for us to rally support behind funding our local journalism. You can help by participating in our "I Support" program, allowing us to keep offering readers access to our incisive coverage of local news, food and culture with no paywalls.
Make a one-time donation today for as little as $1.
Chris Malloy, former food editor and food critic at Phoenix New Times, has written for various local and national outlets. He has scrubbed pots in a restaurant kitchen, earned graduate credit for a class about cheese, harvested garlic in Le Marche, and rolled pastas like cappellacci stuffed with chicken liver. He writes stories on the food world's margins.
Contact: Chris Malloy
Follow:
Twitter: @yollamsirhc
Instagram: @malloy_chris