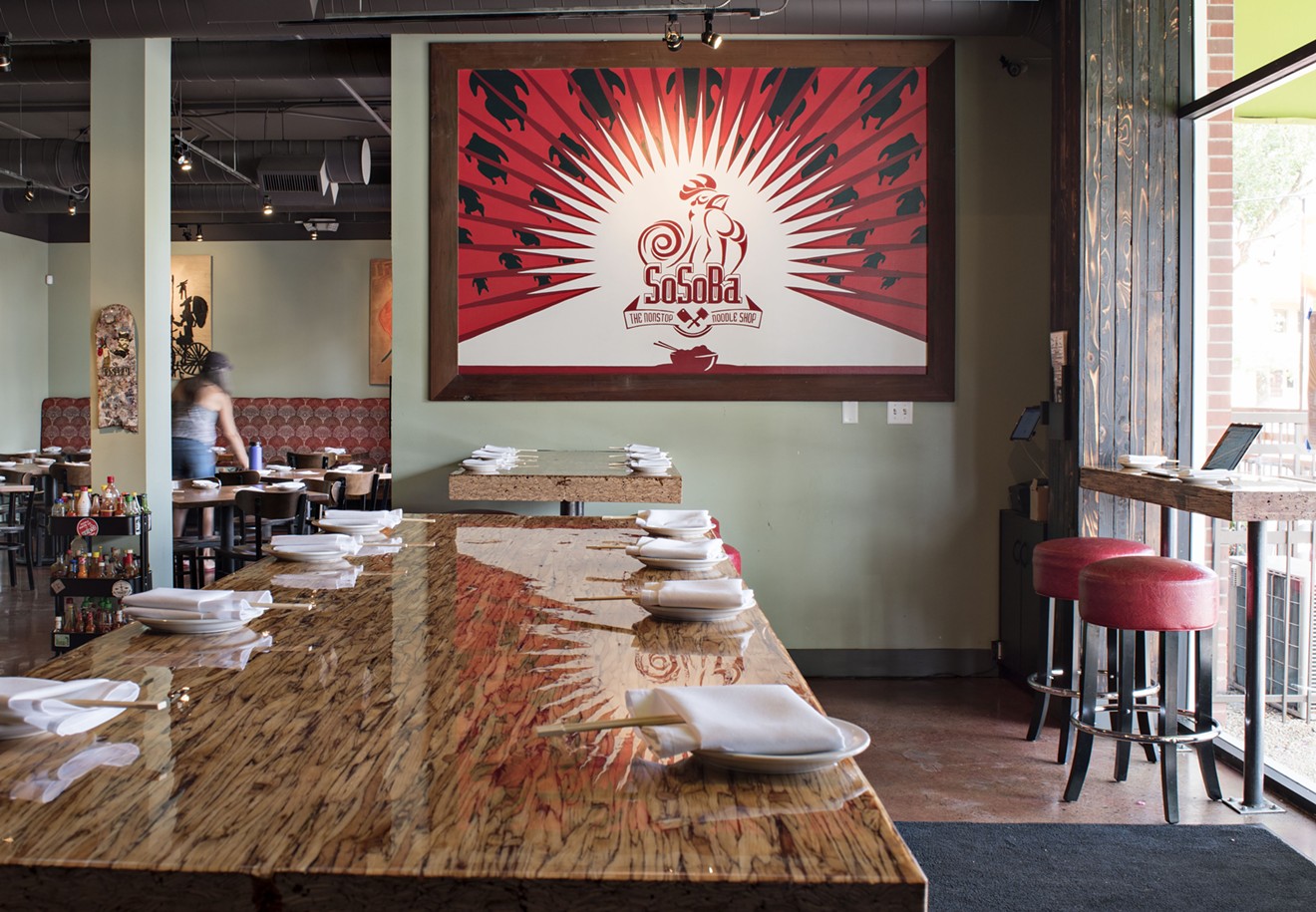 SoSoBa Downtown Phoenix Jackie Mercandetti
My first SoSoBa experience took place about two years ago at the noodle shop’s original downtown Flagstaff location. It was one of those exceptionally cold and drizzly Flagstaff afternoons when the best line of defense against inclement weather is to find shelter and warm yourself over a steaming bowl of soup.

I still remember what I ordered that afternoon: the Mic Drop, one of the noodle shop’s longtime signature bowls. It was an intensely porky dish layered with hunks of glistening pork belly, carnitas, and ham fries and served in an 18-hour tonkotsu pork broth.

Aside from a few familiar touchstones — a couple of slices of softly braised pork layered next to a soft-boiled egg — the dish seemed to have little in common with traditional tonkotsu bowls. Instead of the thin, straight hakata noodles normally associated with tonkotsu, The Mic Drop used thick, wormy udon noodles. The bowl was perfumed with the sweet, tangy funk of kimchi, and was adorned with a big, grizzled piece of chicharrón. 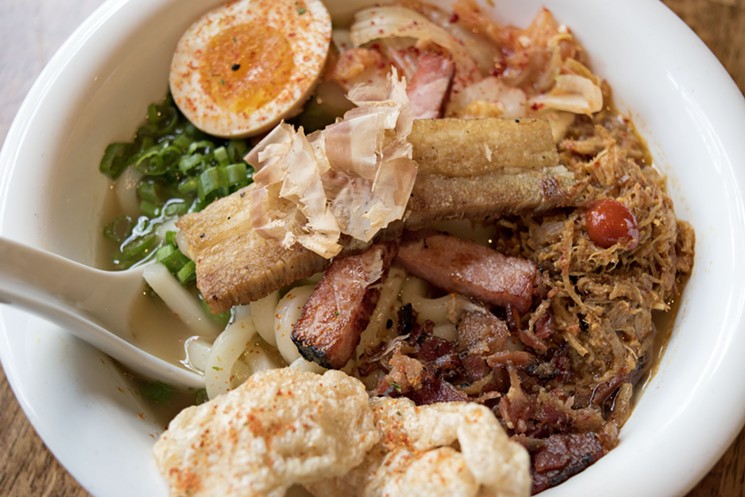 The Mic Drop, SoSoBa’s pork-overloaded bowl of salty, rich intensity.
Jackie Mercandetti
The Mic Drop tasted like a flavor-packed, genre-smashing bowl of culinary irreverence, one that lived up perfectly to SoSoBa’s tagline: “Unabashedly in-authentic.” It took only one slurp to fall in love — the bowl was as delicious as it was unconventional.

Like other SoSoBa fanatics, I was pretty thrilled when I heard that owner Tyler Christensen and chef Joshua Riesner were expanding their nontraditional noodle concept to Phoenix. After some delay, the restaurant finally opened last fall on Roosevelt Row, bringing its menu of fun, twisty ramen, soba, and udon bowls to the space previously occupied by the Euro-styled Centurion restaurant. If it was love at first bite in Flagstaff, it was love all over again last fall in Phoenix.

And I still love SoSoBa for offering one of the more creative and finely tuned fusion menus around town, as well as one of the strongest late-night menus near downtown Phoenix. But judging from a handful of recent visits, it feels like SoSoBa has lost a little bit of its shine.

The restaurant continues to feel like one of the hipper spots on Roosevelt, with its spacious, dimly lit, unpretentious dining room. The low-slung booths and indie rock playing over the house speakers are cozy and inviting. And there is a small, friendly-looking patio bedecked with strings of lights offering front row seats to Roosevelt people-watching and street life. 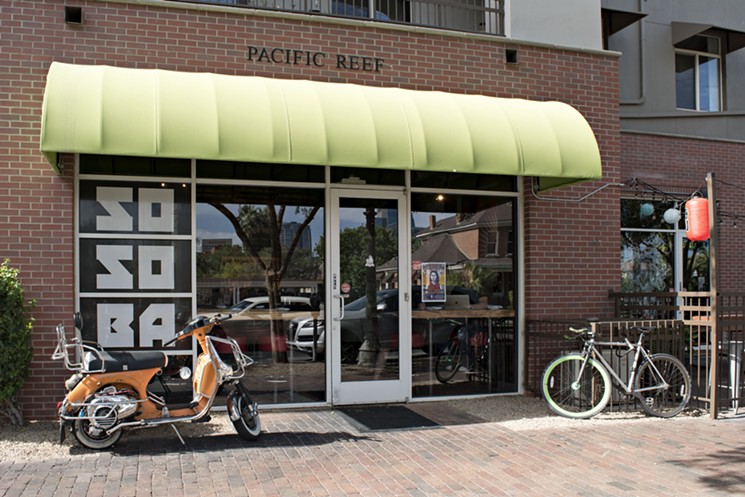 SoSoBa on Roosevelt Row in Downtown Phoenix.
Jackie Mercandetti
Service remains very friendly and casual, if a little more touch-and-go than it was a few months ago. On a recent visit, for instance, a pre-dinner cocktail didn’t arrive until just before the dessert course. There’s nothing highly unusual about a drink coming out late in the meal, but the restaurant was almost empty at the time, which made the delay seem particularly mystifying.

Speaking of drinks, there’s a strong craft cocktail menu, with an emphasis on whiskey drinks. You’ll want to try the house Old Fashioned, if that’s your thing, if only to savor SoSoBa’s pleasantly citrus-sluiced rendition that features house-made orange bitters.

About half the menu is composed of appetizers, and that’s where you’ll find some of the restaurant’s most playful dishes. A good place to start is the sweet chile calamari plate. The light, crisp batter on the squid is hard to resist, as is the nicely piquant chile dressing.

For a long time, though, my favorite appetizer at SoSoBa was the General Tso Tso cauliflower. The normally bland veggie, flash-fried and dressed in a sweet-spicy sauce, comes very close to approximating the texture and flavor of the classic Chinese chicken dish.

On a recent visit, the texture was spot-on, the veggie florets magically transmuted into crispy, meaty morsels. But on my next visit, my cauliflower tasted bland; the veggies had only been lightly and half-heartedly tossed in that deliriously good sauce. If this happens to you, know that you can request more sauce, which you can drizzle over the veggies yourself. Of course, it’d be nice if the veggies were wholly glazed from the start.

Another appetizer, the so-called Balls of Fire, are more consistently disappointing. On paper, a deep-fried ball of macaroni and cheese accented with hot sauce sounds wonderfully decadent. In practice, though, it registers as a largely flavorless bundle of spicy molten cheese. 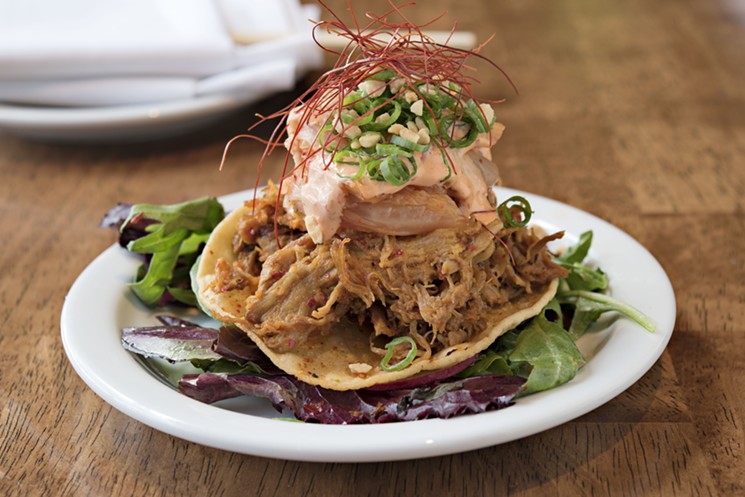 SoSoBa's pork and kimchi tostada.
Jackie Mercandetti
A pork and kimchi tostada? This dish is surprisingly great. The acidity of the kimchi helps balance the richness of the braised pork, and a dappling of sambal aioli adds a pleasant hit of heat to this Mex-Korean mashup. It’s the kind of dish that showcases the restaurant’s knack for harnessing unlikely yet compatible flavors, often to delicious effect.

Even with the local forecast entering triple-digit territory, it’s impossible to resist SoSoBa’s small but enticing menu of noodle bowls.

Of course, you’ll want to try The Mic Drop, SoSoBa’s bowl of maximum pork intensity. It’s not as creamy and fatty as traditional tonkotsu bowls, but it has its own set of virtues. Its scarlet-colored broth sings with notes of garlic, and working through the various layers of pork is part of the pleasure of eating it. My most recent bowl didn’t have the same synapse-rewiring effect that my first encounter with The Mic Drop did back in Flagstaff, but it remains a satisfyingly rich, salty, flavorful bowl.

Another highlight is the TanTanMen, a spicy ramen bowl made with a generous amount of hoisin-glazed ground pork. Some sautéed greens and scallions add an herbaceous punch, but its spicy-salty broth is what really makes the bowl.

A vegan bowl might not seem particularly promising, but the S.U.V. (it stands for “So ... You’re a Vegan”) turns out to be a minor revelation. The well-designed soba noodle bowl has a thick, earthy, mushroom-scented broth. The noodles have a nice firm quality, and the bowl is packed with so much good stuff — namely tepary beans, roasted potatoes, and squash — that it’s just as satisfying as the meaty bowls on the menu.

SoSoBa may not shine as brightly as it did when it first debuted in Phoenix a few months ago, but it remains, for now, one of the most exciting young restaurants on Roosevelt Row. And with an intriguing new lunchtime menu that just debuted, it will be interesting to see how the Phoenix outpost of SoSoBa continues to evolve.