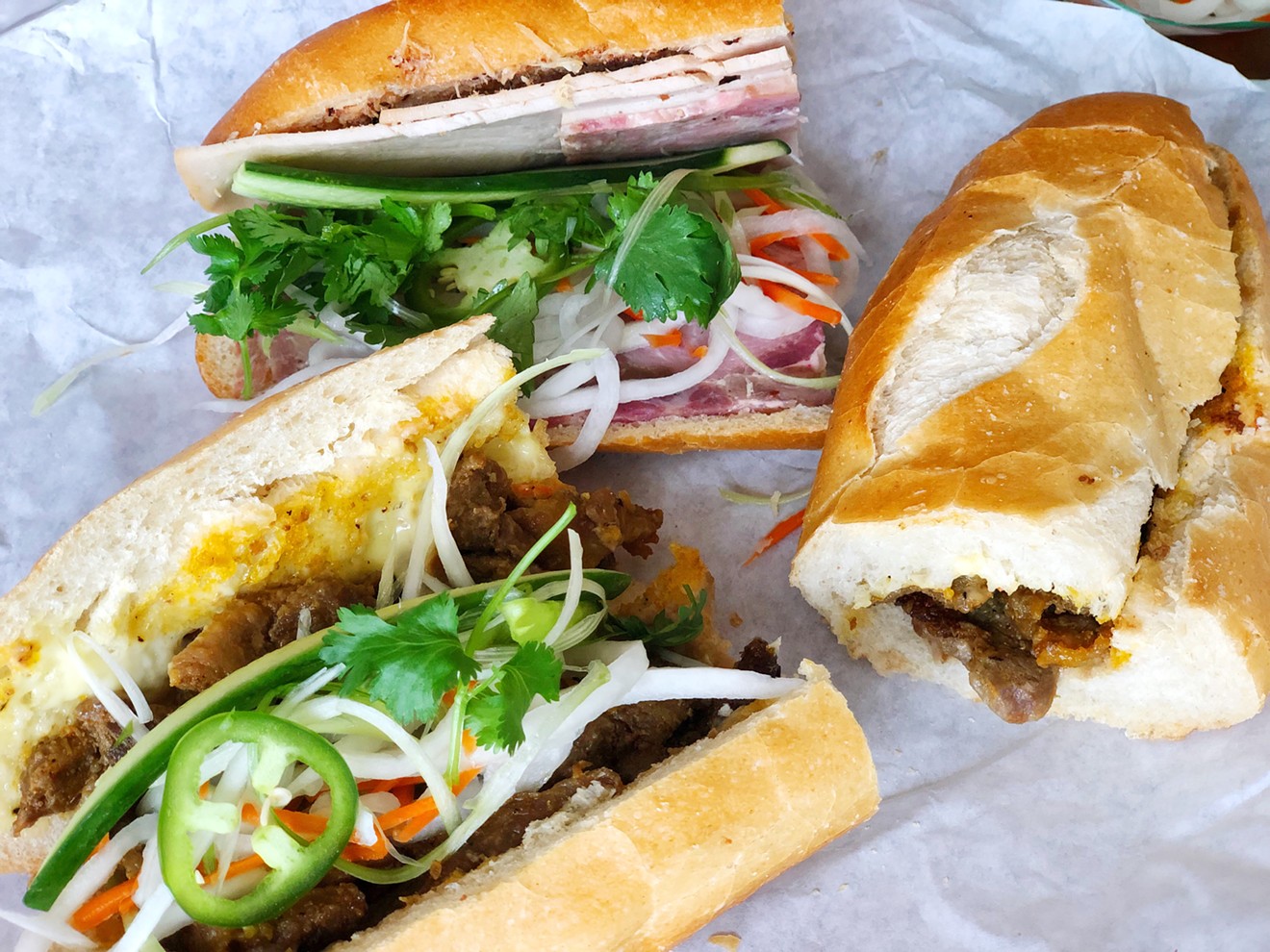 Urbanh Cafe's sandwich selection includes traditional picks like the "Dac Biet" Special and #B3 Grilled Pork, along with unique items like the #B4 Pork Belly. Meagan Mastriani
Just across the street from the banh mi mainstay Lee’s Sandwiches, a new Vietnamese sandwich and drink shop is open at the intersection of Dobson and Warner roads in Chandler.

Urbanh Cafe sits a few doors down from Lee Lee International Supermarket in a space that used to house the dessert spot Bambu. Returning visitors will notice touches from its previous life, like the same light green paint accents, but Urbanh brings plenty of originality, with a different style and menu items than its neighbors and predecessors.

To start with, Urbanh has sandwich varieties not available at Lee’s – an impressive achievement since Lee’s has 18 kinds of banh mi compared to Urbahn’s eight. The #B4 Pork Belly and #B6 Sunny Side Up, with a fried egg, are two of the most intriguing and popular choices, both $5.50.

It’s worth noting that Urbanh’s baguettes are crispier than Lee’s. Visitors who like that audible, scratch-the-roof-of-your-mouth crunch will favor the bread at Urbanh. (Pro tip: Don’t let the baguette get soggy if you plan to take your sandwich to go; just ask the staff to put your pickled carrots, radish, cucumber, and peppers in a bag on the side, then add the vegetables just before eating.)

At Urbanh, dessert usually comes in a cup. A gallery wall of sweet beverages helps visitors decide.
Meagan Mastriani
The drinks and desserts at Urbanh are so picturesque they’ve filled a gallery wall with images of them. Choose from 10 kinds of colorful “che,” sweet Vietnamese beverages ($5 to $5.75), such as the #6 Che Thai with jellies and tropical fruit in coconut milk, or get that avocado fix with the #7 Che Bo which also has red and green tapioca.

There are also fruit smoothies, juices, and coffees. Urbanh’s Vietnamese iced coffee is $4 and mouth-puckering in a good way, with its sharply bitter dark roast and sugary rush of sweetened condensed milk.

Occasionally, Urbanh does sell out of banh mi, so go earlier in the day for the best chances of trying the sandwiches. Some Yelp users have griped about long wait times for food, but in our experience, Urbanh’s turnaround has been on par with similar restaurants in the neighborhood. Just be prepared to sit tight a few minutes while things are made fresh. (One way to pass the time: Give @_urbanh_ a shout out on social media, and they’ll knock 10 percent off your purchase.)

Urbanh Cafe. 2015 North Dobson Road, #9, Chandler; 480-248-6859.
Monday, Wednesday, Thursday, Friday, and Saturday 9 a.m. to 9 p.m.; Tuesday 1 to 9 p.m.; Sunday 10 a.m. to 9 p.m.
KEEP PHOENIX NEW TIMES FREE... Since we started Phoenix New Times, it has been defined as the free, independent voice of Phoenix, and we'd like to keep it that way. With local media under siege, it's more important than ever for us to rally support behind funding our local journalism. You can help by participating in our "I Support" program, allowing us to keep offering readers access to our incisive coverage of local news, food and culture with no paywalls.
Make a one-time donation today for as little as $1.