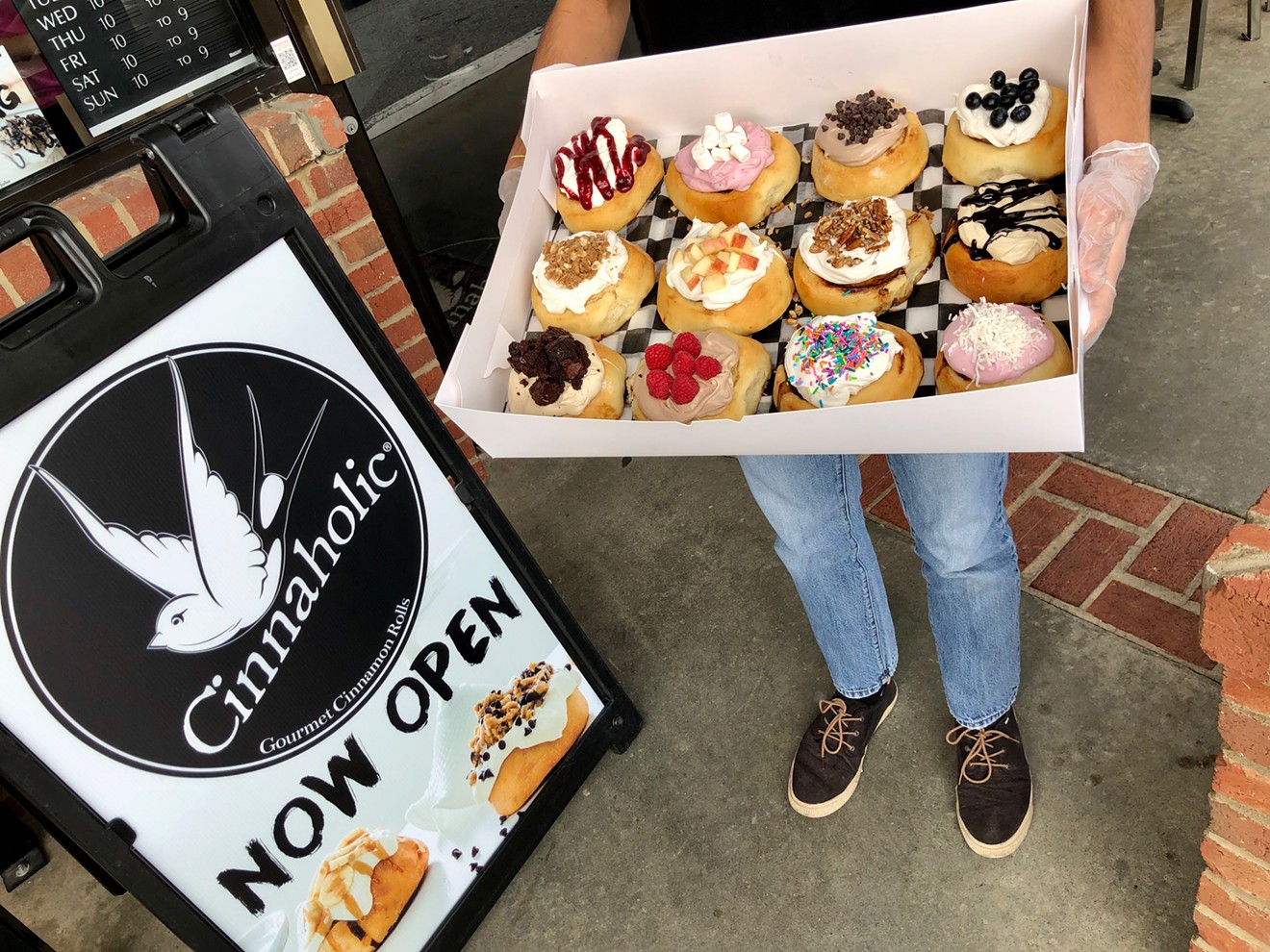 Plant-based pastry shop Cinnaholic is now open in Scottsdale. Cinnaholic
Vikas Mittal, a former Wall Street banker, is now the owner of Cinnaholic, which opened in Scottsdale this month. Cinnaholic carries customized cinnamon rolls with various frostings and toppings with one key difference — "Everything is plant-based. There is no milk, butter, eggs, or cream cheese," says Mittal. Those who face dietary restrictions or allergies can still enjoy a cinnamon roll from Cinnaholic.

Plant-based doesn't mean the cinnamon roll is a compromise on taste. Mittal is confident the Cinnaholic cinnamon roll is comparable, if not better, than the traditionally made roll. "If you were to do a taste test, I doubt you'd be able to recognize the vegan cinnamon roll," says Mittal. On my visit to Cinnaholic, I had a few bites of the caramel apple pie, a cinnamon roll with caramel frosting, fresh apples, and pecans, and it had the same bite and flavor of a regular roll. Mittal is right; I didn't detect a difference.

According to Mittal, creating the right formula is intentional and requires trial and error. "It is difficult to create a dessert without dairy products, but it is all about combining the right ingredients." Tinkering is critical, and finding out what works and doesn't work takes time. 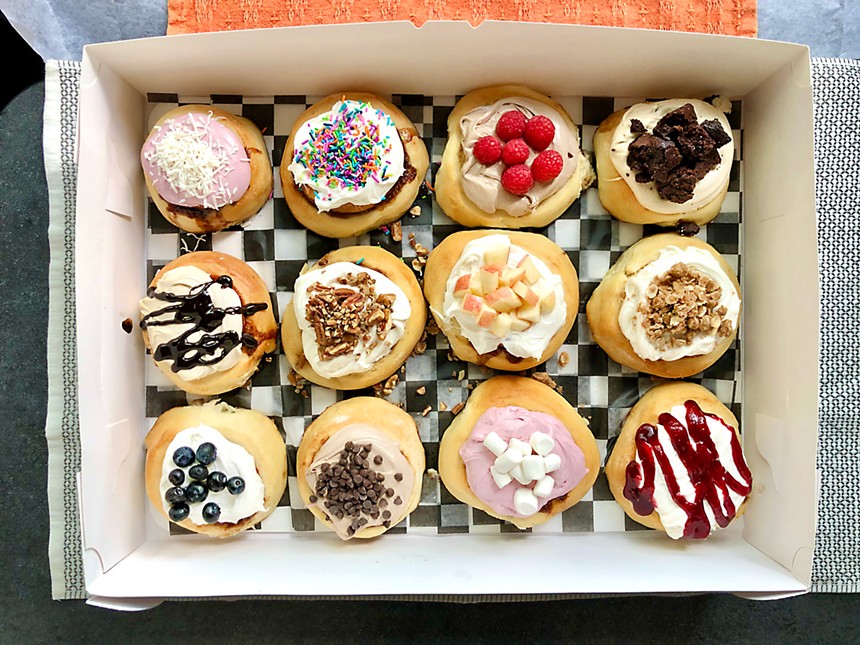 There are several frostings and toppings available at Cinnaholic.
Cinnaholic

The rolls are made fresh daily and are rotated after 30 or 40 minutes and replaced by newer desserts. "We want the rolls to be fresh, and if they are not bought, we either donate them or drop them at various businesses for taste tests," adds Mittal. Having fresh rolls is a key in the Cinnaholic business model, and a baker makes them during the day.

This is Mittal's second Cinnaholic location after opening another in New Jersey in 2019. He's hoping the idea of plant-based cinnamon rolls catches on in the Valley. He's opening a second location in Tempe later this year. To run a successful business, he believes it requires three essential facets. "The right product, the right location, and customer service" are key, according to Mittal. 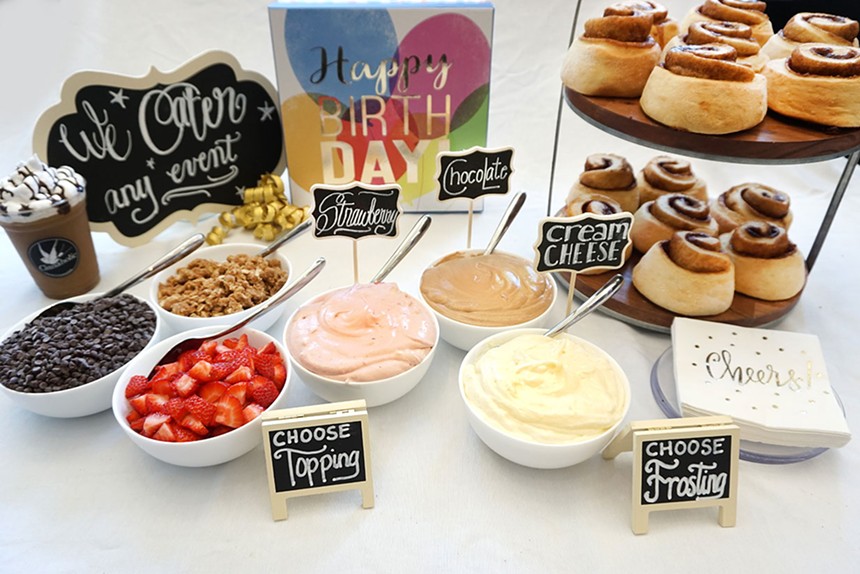 Catering is available for birthday, celebrations, and other events.
Cinnaholic

Although Cinnaholic appeals to the vegan palette, the cinnamon rolls will appeal to any dessert lover at heart. It's also a fun place to eat, the purple walls and balloons greet your welcome, and there is something cheery about seeing all the cinnamon rolls in the glass case. You're automatically in a good mood, whether you're an adult wanting a little something sweet or a child who wants to try every roll on the menu.

Cinnaholic
9220 East Vía de Ventura, Suite 118, Scottsdale
Open daily 9 a.m. to 10 p.m.
KEEP PHOENIX NEW TIMES FREE... Since we started Phoenix New Times, it has been defined as the free, independent voice of Phoenix, and we'd like to keep it that way. With local media under siege, it's more important than ever for us to rally support behind funding our local journalism. You can help by participating in our "I Support" program, allowing us to keep offering readers access to our incisive coverage of local news, food and culture with no paywalls.
Make a one-time donation today for as little as $1.