Arizona Department of Health Services
The 2016 numbers are in:

More Arizonans than ever hold medical-marijuana cards, boosting state-legal cannabis sales — and the tax revenue from them — to a new record.

Arizona patients bought 29 tons of cannabis products in 2016, according to records published today by the state Department of Health Services.

Included in the total are about 27 tons of buds and another couple of tons of edibles and concentrates like wax, shatter, and hash oil.

Calculating at $350 an ounce and an average of 9 percent state and local sales tax, the State Treasury took in at least $29.5 million extra from the sales of pot.

But the overall economic impact of having 99 legal dispensaries in the state is clearly even higher. 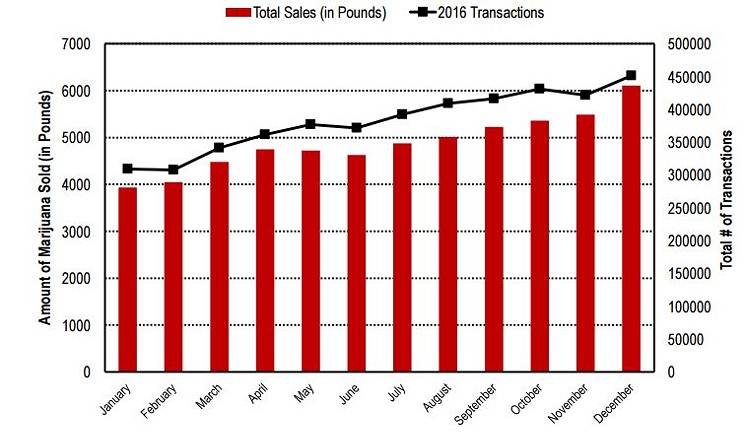 Arizona Department of Health Services
Arizona lost out on the chance to cash in big-time on recreational marijuana when voters turned down Prop 205 in November by 48-52.

A report in Colorado last year showed a $2.4 billion impact from legalizing marijuana in that state, taking into account things like job growth, real estate, and other economic activity.

Arizona's medical-marijuana sales increase was driven by a new wave of patients in the program.

As usual, the DHS — which oversees the Arizona medical-marijuana program — chucks in lot of interesting facts into its report about the program for anyone interested.

For instance, the largest category of patients is the 18-30 crowd, but 76 percent of patients are 31 or older.

And the patient gender imbalance is still great, at 64 percent men versus 36 percent women.

Cannabis works differently on the sexes, some research has shown: Women reportedly don't get as high from marijuana as men and lose more spatial memory when under the influence.

(Click here for the 11-page DHS report in PDF format)

(CORRECTION: This article originally understated the increase in sales. All figures have been recalculated — the correct graph has replaced the previous one, which reflected fiscal-year numbers that ended in June. Sorry about that, dear readers!)