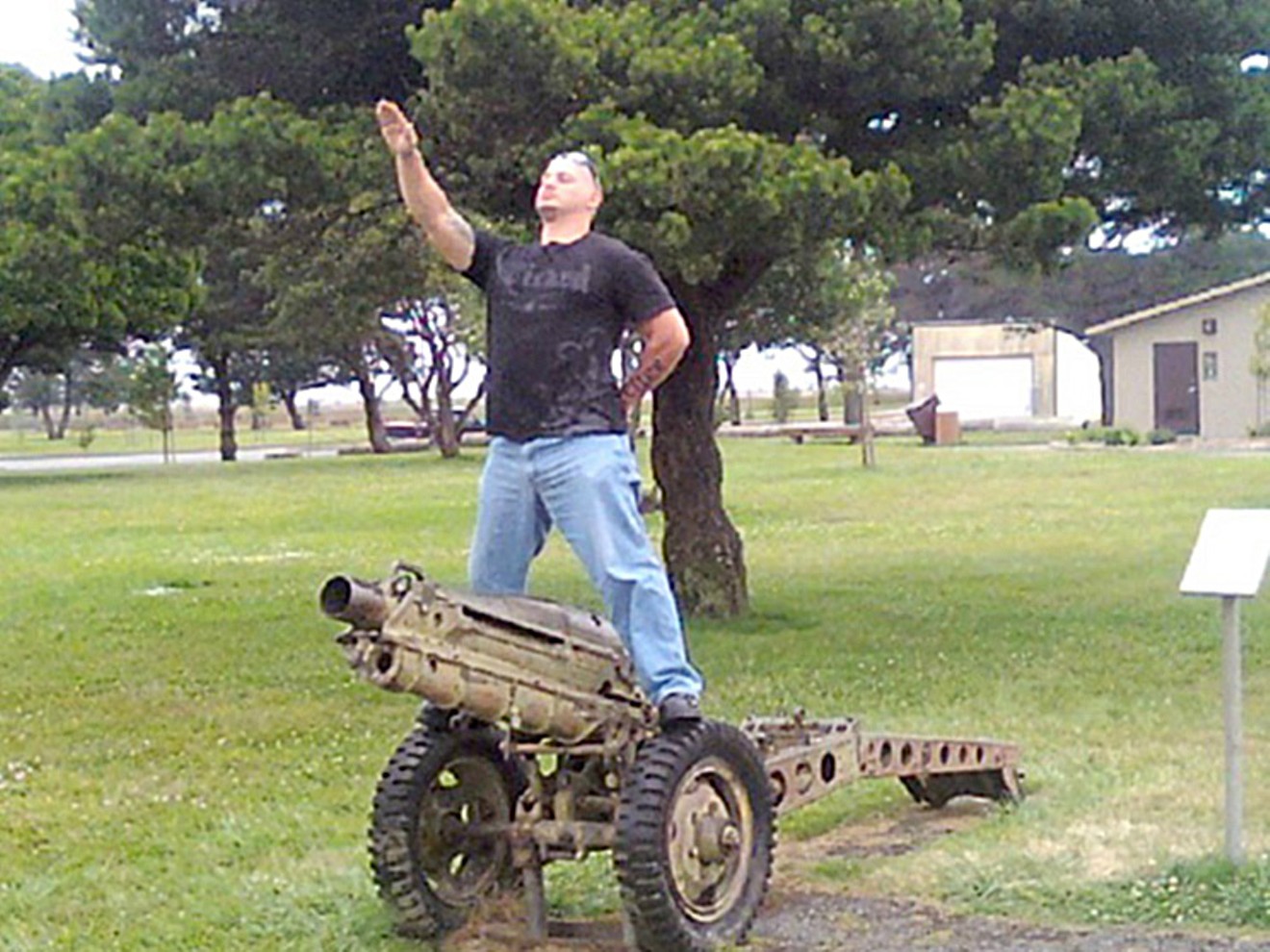 According to the AP, Rebecca Wilder, a spokeswoman for the Maricopa County attorney's office, which is prosecuting Ricci, declined to comment on the case. The Phoenix Police Department, which investigated the attack, also declined to comment.

Phoenix New Times has reported extensively on Ricci.  Here is our last report, when he was seeking protection in France:

Alt-right blowhard Richard Spencer will be goose-stepping with glee over this one: the tale of a pseudo-French neo-Nazi accused of a racially motivated murder, whom the French consulate is looking to save from the death penalty.

Add to this the as-yet-unverified claim that the defendant’s grandfather fought in the French Resistance, and the fact tht Travis Ricci has a high-profile attorney — paid for by the taxpayers — who happens to be Jewish and likes to quote the Talmud, and you’ve got the makings of an HBO miniseries.

Years have passed since I last wrote about Ricci, the alleged trigger-man during an October 2009 drive-by shooting of an interracial couple near Sunnyslope’s Palma Park. More than six years after Ricci and his alleged accomplice, Aaron Levi Schmidt, were charged with first-degree murder in the case, Ricci still awaits trial.

According to Phoenix police reports and court records, Schmidt drove a white, four-door sedan from which Ricci fired twice at the couple with a 12-gauge shotgun.  Apparently he was aiming for African-American Jeffrey Wellmaker, but instead hit Wellmaker’s white girlfriend, Kelly Ann Jaeger, in the stomach, killing her.

The homicide occurred following a random, late-night verbal confrontation between Ricci and Wellmaker, with Ricci calling out, “Hey, nigger, what are you doing with that white woman?”

Ricci's attorney Jennifer Willmott says Ricci is "not a neo-Nazi," but his tattoos — the Hitler stache on his middle finger and the SS bolts near his neck, among others — argue otherwise
Maricopa County Superior Court

Witnesses told police that Ricci then returned to the house where he had been partying with other white supremacists, informing them, falsely, that some black men were assaulting a white woman near the park. Ricci enlisted Schmidt, a fellow member of a vicious neo-Nazi street gang, the Vinlanders Social Club, to hunt down the couple, with grisly results.

In 2012, Schmidt cut a plea deal and admitted to being the driver in the homicide. The circumstances of his plea remain under seal, but sources tell me that if he were to testify, he would finger Ricci as the shooter. He has yet to be sentenced for the Jaeger homicide. Currently, he is serving an 11-year sentence for related charges.

As for Ricci, in 2011, he caught 22 years after being tried and found guilty for an incident that took place a few months after the Jaeger homicide, where he pushed his girlfriend’s head into a wall and then knifed the two men who came to her rescue — one in the hand, one in the neck.
click to enlarge


Ricci is American by birth, but apparently a French citizen by blood, either through his father or grandfather or both, depending on whom you ask.

In 2014, France’s then-Ministers of Justice and of Foreign Affairs wrote a letter to Maricopa County Attorney Bill Montgomery, stating that they were “preoccupied” with Ricci’s case because he was, in their words, a French national, and because he could face the death penalty for his crimes.

The letter further states that as part of the European Union, France is opposed to the death penalty and advocates for its “universal abolition,” since capital punishment, in France’s view, transgresses “the inviolable right of human beings to live [in] dignity.”

Noble sentiments, which apparently did not apply to Jaeger, a mother of two, who was murdered two days shy of her 40th birthday because her boyfriend was black.

If you’re beginning to feel queasy, hold on — it gets worse. After a hearing last week in Ricci’s case — which is now slated to go to trial sometime in September, if it doesn’t get delayed again — I buttonholed his defense counsel, Bruce Blumberg, who confirmed that he might use Ricci’s French citizenship to help mitigate the sentence, should his client be convicted. 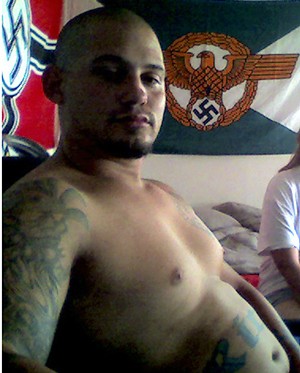 A younger pic of Ricci, as he lounges in a room decked out with Nazi battle flags.
Maricopa County Superior Court
Blumberg is a private attorney appointed by the court to represent Ricci at the expense of the taxpayers. So far, according to a spokesman for Maricopa County, Blumberg has been paid $140,966 for Ricci’s defense. His co-counsel, Jennifer Willmott, has been paid $203,320 to date.

During our confab, Blumberg admitted that he traveled to France to investigate Ricci’s family history.

He also stated that Ricci’s grandfather fought with the French Resistance to Nazi occupation during WWII, an avowal that France’s honorary consul in Phoenix, attorney Gerrit Steenblik, later told me was true.

Evidence that the fruit sometimes falls miles from the tree.

When I pressed Blumberg on how many people went to France on the public dime and for how long, Willmott shushed him and hurried him away.

Before doing this, Willmott did her best Kellyanne Conway impersonation, expressing some alternative facts about her client. Ricci was “not a neo-Nazi” and the killing of Jaeger was “not heinous,” Willmott told me.

No doubt Willmott is jaded, having defended literal femme fatale Jodi Arias, convicted of nearly decapitating her ex-lover Travis Alexander, stabbing him 27 times, and shooting him in the head as he tried to take a shower.

Willmott likely was arguing that the killing of Jaeger doesn't meet the legal definition of "heinous," but I would argue that the crime is in many ways far more despicable than the killing of Alexander by a spurned paramour. Arias’ murder was elevated to ridiculous heights due to its prurient appeal, while the significance of Jaeger’s killing reverberates in the age of Trump and the alt-right. 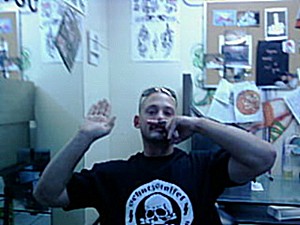 Ricci's T-shirt bears the death's head insignia of Hitler's dreaded Schutzstaffel.
Maricopa County Superior Court
On the other hand, the county tells me that Willmott received $605,478 as contract counsel on the Arias case. Hyped or not, Willmott made bank.

Willmott’s assertion that Ricci was not a neo-Nazi is laughable. Ricci was a probate member of the Vinlanders. There are photos of him at Vinlander events, using Vinlander hand signs, and sporting Vinlander insignia.

There also are photos in the court record of Ricci flipping sieg heils, lounging in front of Nazi flags, and wearing T-shirts with Nazi emblems.

His tattoos speak volumes. On one side of his neck is a swastika, on the other, SS lightning bolts. Thick Gothic script on his forearms proclaims, “Meine Ehre Heisst Treue” (My Honor is Loyalty), the motto of Hitler’s dreaded Schutzstaffel, the black-clad vanguard of the Holocaust.

When I mentioned the tattoos to Willmott and Blumberg, the latter told me that Ricci is “not the person he was.”

In early January, having already heard about this trip to France, I asked the county for a breakdown of Blumberg’s billings, which are public record, only to be told that there was an order from Judge Sherry Stephens sealing the records

Such an order finally did appear on the docket, dated January 25. When I accused Blumberg, via e-mail, of being rather sneaky, he disagreed.

“I put descriptions of thoughts, strategies, important confidential materials in my time billing records,” he wrote in reply. “They must remain confidential until the entire case is complete.”

Sheesh, hasn’t this guy ever heard of redactions?
click to enlarge 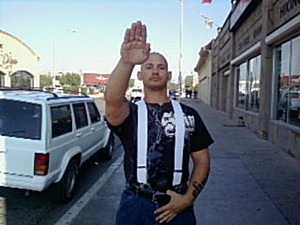 
Blumberg advised me that as a Jewish person and a lawyer, he opposed the death penalty. He paraphrased a quote from the body of Jewish law known as the Talmud, which states that every human soul is of infinite value.

“It means that if you save one soul, you have saved the whole world,” he wrote in one e-mail.

Perhaps, but there’s plenty in the Old Testament to support the death penalty. I suppose it’s here that I should mention that intelligence provided by the Anti-Defamation League of Arizona was crucial to the Phoenix Police Department’s solving of the Jaeger homicide, which initially went cold.

As for saving souls, I would have preferred saving an innocent woman walking in a Phoenix park with her boyfriend, rather than the cowardly, racist scum who allegedly shot her down.

E-mail [email protected].
KEEP PHOENIX NEW TIMES FREE... Since we started Phoenix New Times, it has been defined as the free, independent voice of Phoenix, and we'd like to keep it that way. With local media under siege, it's more important than ever for us to rally support behind funding our local journalism. You can help by participating in our "I Support" program, allowing us to keep offering readers access to our incisive coverage of local news, food and culture with no paywalls.
Make a one-time donation today for as little as $1.