Phoenix Was No Charlottesville, but a Peaceful Trump Rally Still Ends in Chaos 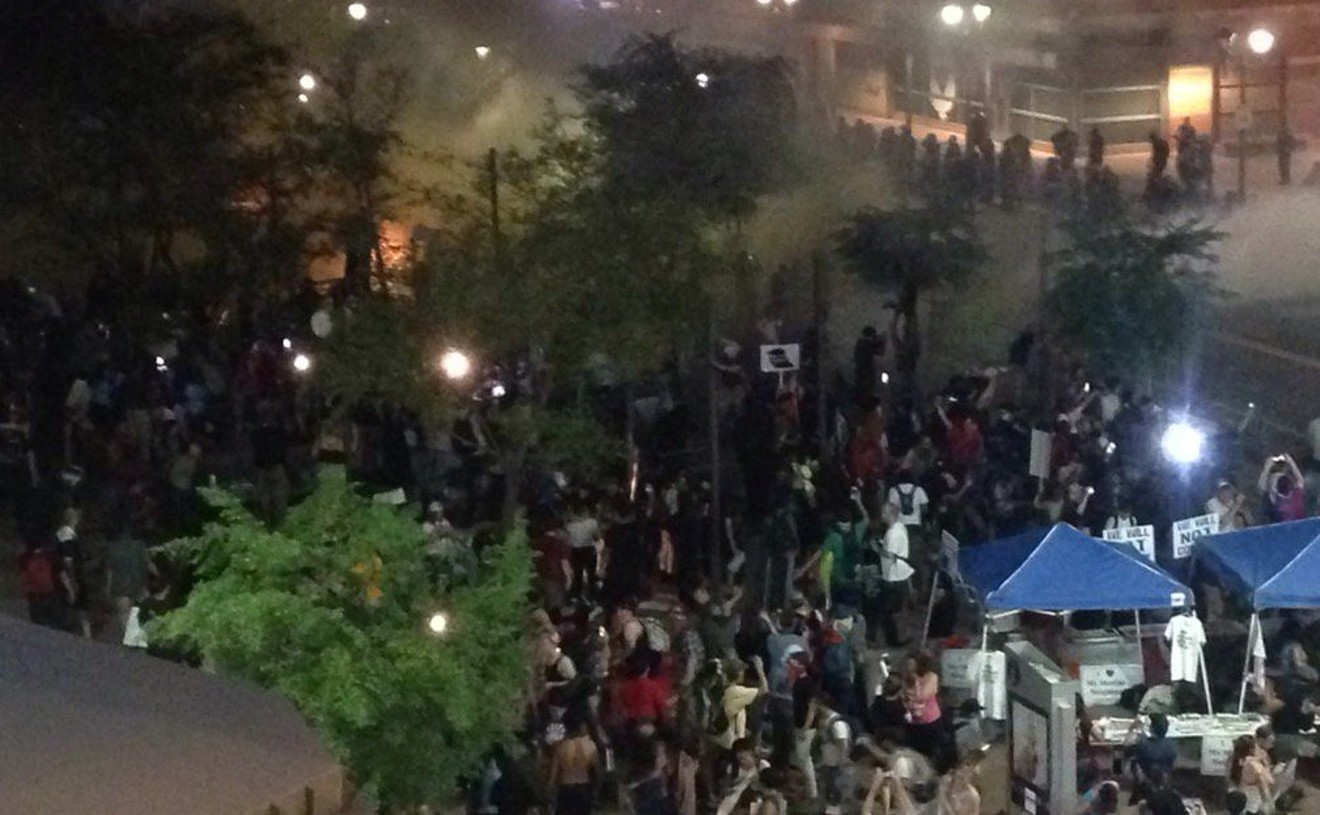 For hours Tuesday, the controversial lightning-rod visit of President Donald Trump to the Phoenix Convention Center played out as Mayor Greg Stanton said he hoped it would. Thousands voiced their strong political views without major incident. For a moment, it looked like Phoenix was really going to show the world what it was all about, in his words.

Sure, there was anger and abusive language and ugly rants shouted back and forth across Monroe Street, which served as a kind of Mason-Dixon Line in the 2017 re-enactment of America’s deepest wound. But it was peaceful.

Until around 8:30 p.m. That’s when violence didn’t erupt so much as burped. That’s when Phoenix showed its other side, the one that will grab the headlines.

A line of police, dressed in riot gear, raised up rifles, let off a volley of pepper spray into the crowd of anti-Trump protesters across the street at the Herberger Theater Center. After that came a smoke canister of some kind, which a demonstrator lobbed back at police. Then two loud booms and a huge ghostly green and grey cloud of what police said was pepper spray billowed up from Monroe Street.

The crowd ran away, some screaming, some holding cloths over their faces as the acrid smoke burned eyes and throats, even five floors up on the parking garage down the block.

Officers fired more tear gas at protesters in the next 20 minutes as phalanx of about 50 police in riot gear, now wearing gas masks, pushed back a crowd of younger, more agitated protesters on Second Street. 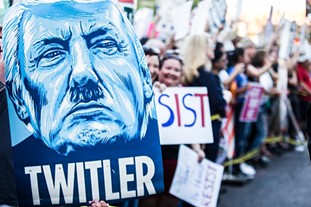 They called him "Twitler"
Zee Peralta
There, a young man with a bullhorn was whipping up a small throng, and the chants turned from the political “Nazis go home” and “Lock him up” to the anti-police “my streets” and “don’t shoot” cries made famous in Ferguson, Missouri. One man charged the police ranks and was pepper-sprayed by three officers and hit with a gas canister at close range by another. A handful of demonstrators lobbed plastic and glass bottles at the advancing line.

Yet, the Phoenix Police Department reported it made only three related arrests, no property was damaged, and the only reported injuries involved heat-related illness.

By 9 p.m., a loudspeaker from the circling police helicopter warned people to disperse or face arrest. The crowd had already been thinning for two hours, but now the streets emptied quickly. Small knots of demonstrators remained and engaged in racially charged shouting and shoving contests for the next hour.

For a tense, angry protest involving somewhere between 3,000 and 5,000 protesters, according to unofficial estimates, the violence and destruction were relatively minimal. There were no Molotov cocktails, no smashed windows, no bleeding skulls cracked by batons, none of the scenes that have played out in some other U.S. cities.

None of the fears of extremist violence of the kind seen last week in Charlottesville, Virginia, materialized. 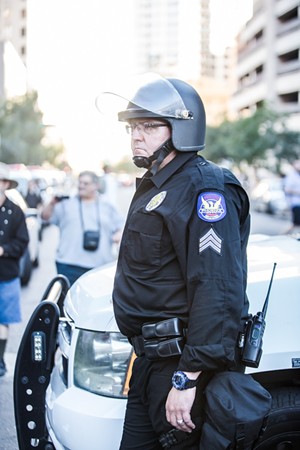 A Phoenix Police officer keeping things calm.
Zee Peralta
The Phoenix Police Department will now conduct an after-action report to determine the specific causes of and responses to that violence. Police said they arrested two people for assaulting an officer and one for unspecified public damage. Police spokesman Sgt. Jonathan Howard said the two suspects struck at officers, but didn’t injure them.

• Some people in the crowd began to throw rocks, bottles, and other projectiles at police.

• Fights were occurring within the crowd.

• Some people in the crowd began toppling pedestrian fencing that had been placed to block the roadway and create a safety zone surrounding the Convention Center.

• Warnings were given to the crowd to disperse.

• No rubber bullets were fired by police.

Williams and Stanton declared the day a success.

“The first and foremost job was to get everybody home safely,” Stanton told reporters after the crowds had dispersed. “That’s exactly what happened in Phoenix, Arizona tonight.”

Asked by a reporter who questioned Williams’ account of how the trouble began if the police used appropriate force, the police chief said, “Absolutely.”

However, Carlos Garcia, executive director of the Puente Human Rights Movement, described a diverse coalition of groups that had their peaceful rally broken up by aggressive police action.

“We all came together, stood across the street and stood up against Donald Trump," Garcia said at a press conference this morning. "And what happened? We were terrorized, we were attacked by the Phoenix Police Department. They came in as if this was a war zone.”

“You have to stop stuff before it happens," he said. "It’s no different than a guy reaching for his gun. Do you wait and shoot until he points it at you or do you act when you see behavior that brings a fear or suspicion they’re going to act and then stop the action before it’s happened? It’s like stopping a small fire and not allowing it to grow.”

Stanton and Williams said that tens of thousands came to express their First Amendment rights and did so peacefully until only a “small number” of people marred the event, without major consequence.

All week, Williams had said the authorities were ready for an event Stanton said he never welcomed.

The signals were good. No intel chatter suggested that violent extremist groups had designs on the streets around the Phoenix Convention Center. Tuesday morning somebody logged a social media post bragging about ramming his truck through a crowd, but the threat never went beyond that.

Phoenix Fire Department spokesman Capt. Rob McDade reported that 500 to 700 extra public safety personnel were brought in to secure the event, on top of all the law enforcement and emergency crews already working.

The city deployed its dump trucks to serve as street barricades.

The show of force was manifest. Dog teams roamed the entrance to the convention hall. Spotters lined its roof with cameras and rifles. A large number of Secret Service agents patrolled inside and outside the convention center.

People going into the hall had to dump out their water bottles. A few re-emerged after being told they couldn’t bring in their e-cigarettes. A pile of backpacks and other contraband littered the sidewalk. Electronic billboards told visitors no weapons or explosives were permitted.

One man who drove from Los Angeles and waited seven hours in line to see Trump said some people behind him had guns.

For about five hours, none of that mattered. It was a raucous, at times rude, but peaceful demonstration.

"We were on the front lines, our hands were up — we were peaceful," said 16-year-old Isabelle Henderson after the gas came. "My eyes are burning."

Mallory Henderson said she wasn't deterred by the first round of gas and smoke, but eventually fled it.

"We were gassed the first time and I still went back and held a sign," she said. "They were just afraid of what we were saying, which was the truth.... we just want peace."