Police tracked a suspect connected to the shooting death of forensic psychiatrist Dr. Steven Pitt, right, as well as three other victims, to a Scottsdale hotel in the early hours of Monday morning, where the suspect died of a self-inflicted gunshot. Phoenix PD; Joseph Flaherty; Paul Rubin
UPDATE, JUNE 4: Maricopa County Sheriff's Office detectives are working a scene in Fountain Hills that could be related to the deceased suspect. Donna Rossi, MCSO spokesperson, could not confirm anything about the scene:

"MCSO has a current investigation going on at this time near the area of Kit Fox Place in Fountain Hills. There is no other information ready for release at this time," she said.

Media sources called the Sheriff's Office about the Fountain Hills investigation before the office put out a statement on it, Rossi said.

Other media outlets have reported that the Fountain Hills scene may involve one or two other homicides and is connected to the Scottsdale murder spree case. More information is expected from police at 3 p.m.

The suspect in four recent murders that shocked the legal community was found dead on Monday morning of a self-inflicted gunshot wound following a police standoff at a Scottsdale hotel.

Scottsdale and Phoenix police, with the help of state and federal authorities, tracked the still-unnamed suspect to the hotel near Scottsdale and Shea roads in Scottsdale early in the morning. A tactical team evacuated surrounding rooms at the Extended Stay Hotel, 10660 North 69th Street, in Scottsdale. 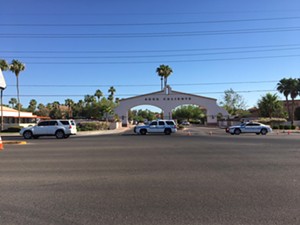 Police cornered the murder spree suspect at an Extended Stay Hotel located at 10660 North 69th Street in Scottsdale. He was found dead of a self-inflicted gunshot wound.
Joe Flaherty
Police said that the deceased suspect is an adult man, and that more details would be released later today. No officer fired any shots during the operation, according to Lewis.

The suspect was soon identified as Dwight Lamon Jones, 56, who had been going through a divorce and child suport battle in a case that began in 2009. Jones represented himself while his wife had hired lawyer Elizabeth Feldman. Feldman's office was one of Jones' targets.

The sudden end to the violent spree brought relief following days of fear since the first shocking gun slaying of nationally known forensic psychiatrist Steven Pitt in his Phoenix office, which was followed by the murders of Veleria Sharp and Laura Anderson, two paralegals at the downtown Scottsdale law firm of Burt, Feldman, Grenier.

On Saturday, pressure to find the outstanding suspect increased with the discovery of the body of hypnotherapist and anger management specialist Marshall Levine at this Scottsdale office.

Lewis told reporters that Levine's murder was likely linked to the other three.

"I can also confirm at this time we are confident that the Morgan Trail homicide, Dr. Levine, is also connected to this series,” Lewis said.

Lewis said police developed information that led them find the suspect over the past day and a half.

Lewis said there will be an additional briefing around 4 p.m. with more details. They are not releasing the deceased suspect’s name until they notify next of kin.

"We feel tremendous sorrow for the victims of this senseless tragedy. Our hearts go out to the families of Laura, Valeria, Steven and Marshall. We hope that everyone remembers these great people for the warmth and love they showed during their lives.

"We appreciate the efforts by Scottsdale and Phoenix police department and all law enforcement who helped protect the public during this dangerous spree.

"The law firm continues to work with authorities to help obtain a complete picture of why this mass murder occurred.

"We ask for some time to come to terms with this tragedy and ask for privacy as we mourn these losses."
KEEP PHOENIX NEW TIMES FREE... Since we started Phoenix New Times, it has been defined as the free, independent voice of Phoenix, and we'd like to keep it that way. With local media under siege, it's more important than ever for us to rally support behind funding our local journalism. You can help by participating in our "I Support" program, allowing us to keep offering readers access to our incisive coverage of local news, food and culture with no paywalls.
Make a one-time donation today for as little as $1.