CW Hemp, makers of Charlotte's Web high-cannabidiol (CBD), low-THC extract oil, announced Thursday morning that its products could be purchased through the retail giant's website. According to the Cannabist web site, CW Hemp put out a press release on Thursday announcing that Target sold the products, claiming it meant CBD was "going mainstream"

But by Thursday afternoon, Target's web page that sold the products was updated to reflect the products' removal.

However, that wasn't entirely correct. 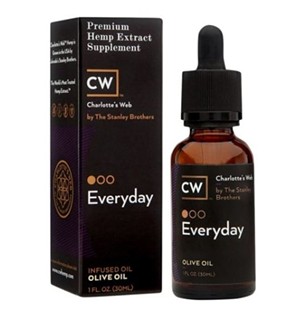 Charlotte's Web hemp extract, which contains cannabidiol, was sold on Target's website since at least early September.
Target.com
New Times mentioned that Target sold CW Hemp extract in a September 11 article about a Phoenix lawyer who was denied foster-care licensing because she gave the product to her son to help sooth his self-destructive behavior.

Links to the article appeared on several national cannabis-oriented sites, including MerryJane.com, and the Arizona Department of Child Services appeared to change its position on licensing after the story was published. That was also reported by New Times.

Told about the articles, Decker sent another email saying, "After further review it does seem that we began offering this product in early September. I am not able to provide a specific date."

Target's move is likely related to the DEA's warning in January that its considered hemp extracts a Schedule 1 drug, like marijuana, under the Controlled Substances Act.

After publication of the September 11 article about prospective foster-care parent Rebecca Masterson, a CW Hemp representative pushed back against New Times' characterization that such products are in a legal gray area.

Mary Ann Rounseville, director of CW Hemp content strategy, denied that it was unclear the CBD products were legal.  She wrote:

"In Sec. 7607 of the Agricultural Act of 2014 (aka the Farm Bill) the 'Controlled Substances Act' and 'any other Federal law' is specifically nonwithstood before defining 'industrial hemp' and legalizing its domestic cultivation and marketing for the first time since 1937.

"The CSA does not contain the terms 'cannabidiol', 'cannabinoids' or 'hemp.' In order for these terms to be included in the CSA and officially become law, it would take an act of Congress, passed by the House and Senate, and signed by the President.

"Charlotte’s Web, and many other domestic hemp products, are cultivated in full compliance with the Farm Bill, under appropriate licensing from respective state departments of agriculture in Colorado and Kentucky."

CW Hemp continues to advertise the fact that it "proudly ships our Charlotte’s Web™ proprietary hemp extracts to all 50 States."

CW Hemp did not respond to a request for comment on Friday morning.

CW Hemp continues to advertise that its CBD-rich hemp oil products are sold in all 50 states.
CWHemp.com
The Hemp Industries Association  represents CW Hemp and other makers of hemp extracts that contain little THC, the primary psychoactive compound in cannabis plants. The association sued the DEA in January over the legality issue. Patrick Goggin, a lawyer for the HIA, told New Times earlier this month that the lawsuit is awaiting a hearing in federal court.

Conceivably, the Target move could prompt other online retailers to reconsider the sale of CBD-rich products in states without medical-marijuana laws, leaving patients who want it in a lurch. Numerous anecdotal reports and some scientific studies suggest CBD is a wonder compound that reduces inflammation, lessens pain and anxiety, controls seizures, and has other healing or symptom-easing powers.

Dr. Sanjay Gupta of CNN said in 2013 that he was convinced such products had strong potential after seeing how they appeared to help certain patients.

Masterson, the lawyer who gives CBD to her son, was initially denied a foster-care license to help raise a 16-year-old boy after admitting to state officials that she was a state-authorized medical-marijuana caregiver and gave CBD oil to her younger, adopted son. Following the denial, Masterson moved to cancel her caregiver card. But the DCS continued to deny her based on her possession and use of CW Hemp products that she had purchased online.

As she wrote on her personal blog, "The State basically said sorry, you crazy lawyer with an adopted son and all this special needs and attachment experience, even though you’re the only person willing to open your home to this 16-year-old boy in the system, and even though he is already living in your home, we don’t think you’re suitable to be a licensed foster parent because you buy a supplement online that really helps your child. No license for you."

Masterson later showed DCS licensing supervisor Michael Faust that the same CBD product she had purchased at an Arizona dispensary, Charlotte's Web Everyday Pure Hemp Extract Oil, was being sold online by Target and other stores.

Faust ultimately told her that after conferring with other officials, the DCS would revise its policy and not preclude her from obtaining a foster-care license simply because of her use of the product.

It's still uncertain if or how DCS has revised its policy, or whether it will reconsider — again — its policy in wake of Target's decision. New Times asked Darren DaRonco, DCS spokesman, for a copy of the updated policy on September 15, but DCS has not responded.

In the meantime, Masterson is continuing the long application process for a foster-care license, which will allow her to claim benefits including financial support for her extra costs in raising the 16-year-old boy, who has no parents and "anger issues."

Masterson expressed concern over the Target decision on Friday, but otherwise had no comment.

DaRonco said he would check again with DCS officials about the current policy, but did not get back to New Times as of Friday morning.

Hemp extracts with CBD from CW Hemp and other manufacturers can still be found on other online stores, and authorized Arizona medical-marijuana patients can legally buy the products in dispensaries.