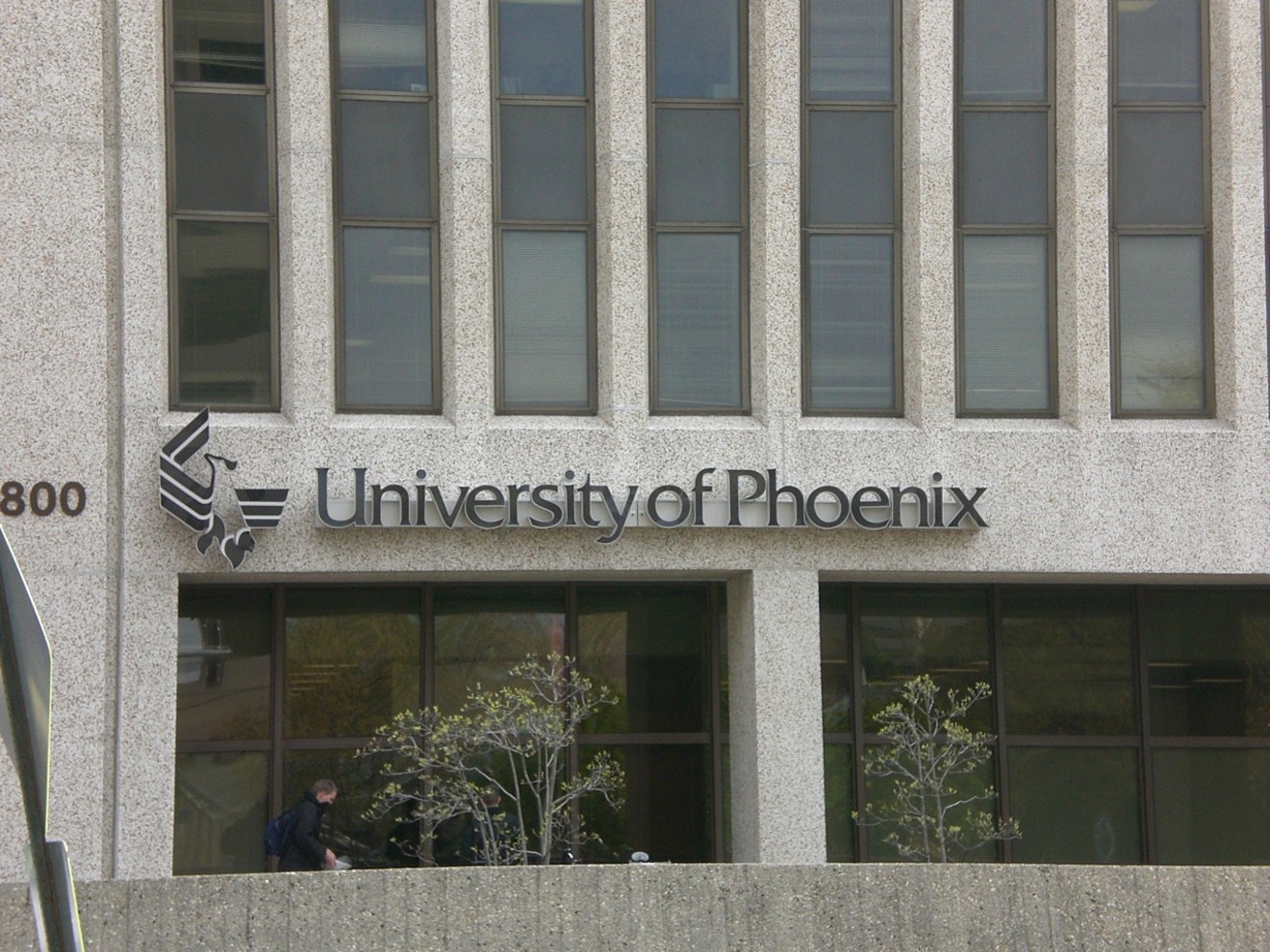 Employees say the University of Phoenix plans to stop enrolling new students at physical campuses in states across the country. Moqub/Flickr
This story was updated with further comment from the school.

The University of Phoenix plans to scale back more brick-and-mortar campuses across the country, according to university employees and internal communications obtained by Phoenix New Times.

The best-known for-profit university will phase out on-campus enrollment and teaching at around 20 locations, according to employees and internal discussions. The locations in question include full-fledged campuses in Detroit, Tucson, El Paso, and Albuquerque, along with smaller learning centers in San Bernardino and Woodlands, Texas.

The University of Phoenix's external affairs department confirmed that as of Friday, the university "is instituting a teach-out phase at several of our campus and learning center locations."

A statement from the university today after the news got out emphasized that "no current student's courses will be affected."  The university is not accepting new students for many of its ground campuses, only online.

Last Friday, employees at the University of Phoenix were ushered into a meeting room and informed in a conference call that the company plans to phase out teaching at a slate of learning centers and campuses nationwide.

The university denied that the call took place.
"This is huge," the employee told New Times. "We’re talking Washington D.C., all the way over to California."
The university said in an email that it "will continue to service current students at these locations, at other approved University locations or through our online programs, until they graduate. The University will allow students to determine whether they want to complete their education on campus or online."

The university employee speculated that the move is likely related to a decline in student enrollment. The University of Phoenix has shed students since 2010, when it enrolled around half a million nationwide. In 2016, the university reported that its enrollment was around 139,000.

Timetables for closing the locations are not certain, the employee said, and could range anywhere from the next few months to several years. But any news of closures will be of interest to students — to say nothing of employees, who fear that layoffs at these locations are inevitable.

"Student engagement is based on their ability to know [if the campus will remain open]. That would make up my mind as to why I want to continue at that location or not," the employee said.

On a message board dedicated to job cuts and layoffs, rumors swirled about impending layoffs in the University of Phoenix's IT and admissions departments.

In February, the Apollo Education Group was taken off the NASDAQ after the company negotiated a sale to private investors for $1.1 billion.

The company's financial woes were preceded by high-profile lawsuits, an investigation by the Federal Trade Commission, and negative press coverage related to predatory recruitment practices. In 2012, the University of Phoenix closed 100 campuses and eliminated 800 jobs nationwide in a pivot to online learning designed to cut costs.

Several websites for the University of Phoenix locations that employees identified now display this message to prospective students: "Although this location is no longer accepting new campus-based enrollments, you can still enroll for an online program at phoenix.edu. Current students will continue on-site instruction."

The Phoenix employee said she hoped that any changes or closures would not upend the educational plans for current on-campus students. "Whatever students are there, they’re hopefully going to be able to finish their program," she said.

But the university communications department argued that the impending shake-up was for the best.

The university said in an email, "This change will have no impact on our academic quality, the student experience or student outcomes, and is consistent with the University’s goal of optimizing resources to most effectively serve our students."