10 Reasons to Love Summer in Arizona Bemoan the sweltering heat, inevitable sunburns, and incessantly blazing sunshine all you want. There’s plenty to adore about Arizona in the summertime. We're almost halfway through the season, and here are 10 reasons we love it.

Monsoons
As the mid-summer clouds begin to form and the winds kick up, Phoenix’s signature storm season can mean some mild relief from the heat. The fantastic lightning shows are a photographer’s dream, and we’re partial to the random torrential downpours that would be a bummer in most other climates. Leave it to desert dwellers to get psyched about rain — and the smell of drenched creosote. After a couple of months of 100-plus temps, monsoon season is nature’s cure for summer burnout. Gargantuan dust clouds sweeping through the Valley are the perfect excuse to stay indoors and live vicariously through the Instagram of Mike Olbinski (@mikeolbinski), the mega-talented storm-chaser who’s captured everything from tornadoes to microbursts. Soak it in — you’ve earned it.

First Friday
Downtown Phoenix’s First Friday art walks are nothing if not popular. The crowds on Roosevelt Row have gotten so big, it can be tempting to stay home and forget about the whole ordeal. But during summer, it’s a different story. As temperatures rise, the crowds start to dwindle, increasing your chance of seeing some art without having to elbow your way through a sea of spectators and kids holding “free hugs” signs. The monthly to-do also promises free general admission to Phoenix Art Museum (1625 North Central Avenue) and the Heard Museum (2301 North Central Avenue), while art hotel Found:RE Phoenix (1100 N. Central Ave.) presents fresh art in its Studio space. 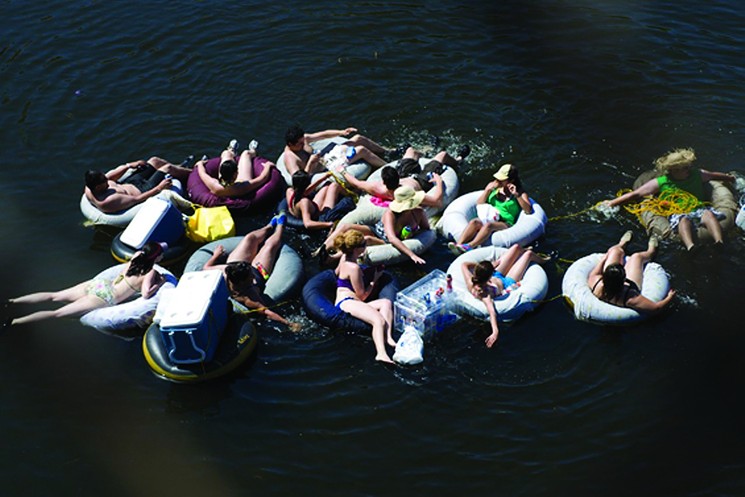 Tubing on the Salt River is a Phoenix summer tradition.
Victor Palagano

Salt River Tubing
Contrary to popular belief, Salt River tubing isn’t just for drunken college kids. (But if you’re into that, bring marshmallows and a cooler.) Drive over to the Tonto National Forest (9200 North Bush Highway) in Mesa for entry and tube rental, and put on enough sunscreen for up to five hours of floating. Pro tip: If you go on a weekday, right when the park opens at 9 a.m., you can enjoy the natural landscape in relative solitude. And if you’re lucky, you might spot some wild horses crossing the Salt River. Cost is $17 per person for a day of tubing, and facilities are open seven days a week from 9 a.m. to 6:30 p.m. — weather permitting.

Chase Field’s Roof
Even when it’s downright smoldering outside, Arizona Diamondbacks fans don’t have to sweat it out while catching a game, thanks to the 9-million-pound retractable steel roof on Chase Field (401 East Jefferson Street). Which means that hats have become a summer fashion statement — or a way of declaring team allegiance — rather than a necessity at the downtown ballpark. Seriously: On most 100-plus days, they shut out the blazing sunshine and blast some much-appreciated air conditioning. For those seated in the upper levels, the blowing air can make it downright cold. We’re fine with that.

Cheap Staycations
With tourist season at its low point, locals can reap the benefits with sweet staycation discounts. Relatively cheap room rates, free amenities, and complimentary wining and dining are just some of the ways Valley hotels and resorts try to woo summer guests. This summer, take advantage of the opportunity to get away from it all without ever stepping through airport security. You’ll find deals across the Valley: for example, the W Scottsdale (7277 East Camelback Road, Scottsdale) has a Sips + Sunshine package that includes a cocktail kit and a breakfast credit, and FOUND:RE Phoenix Hotel (1100 North Central Avenue) has a RE:FRESH Summer Room Package that includes a food and beverage credit and pool swag. The cooler temperatures of Sedona are just a short car ride away.
Dave Clark

Day Trips
Here in Arizona, you don’t have to take a vacation day to treat yourself to a trip — and a total change of scenery. Some parts of the Grand Canyon State are actually quite temperate in the summer. And who doesn’t love a good getaway? Several roadways out of Phoenix also provide great views. Try the Joshua Forest Scenic Parkway, which stretches from Wikieup to Wickenburg, or the Apache Trail, a path originally used by stagecoaches running through the Superstition Mountains. As for small-town Arizona, put the wineries of Jerome, the weird streets of Bisbee, the red scenery of Sedona, and historic downtown Prescott on your day-trip bucket list.

Movie Theaters
They have summer blockbusters, giant sodas, and air conditioning. Honestly, what more could you ask for? With the average feature film running about two hours these days, you can park it in a reclining plush chair, order an ungodly amount of popcorn, and wait out the hottest part of the day in one of Phoenix’s luxe, budget, or arty movie houses. For a high-end experience, you can’t beat Harkins Camelview at Fashion Square 14 (7014 East Camelback Road, Scottsdale), where mega-hits are presented alongside independent fare. Coming in a close second is AMC Esplanade 14 (2515 East Camelback Road), whose only downside is that your fellow moviegoers can order extra beers and burgers during the movie. And that can make for distractions. For some arthouse picks, try FilmBar (815 North Second Street) or Chandler’s Alamo Drafthouse Cinema (4955 South Arizona Avenue, Chandler). Pool Parties
Let’s be real: The beach is overrated. Between the seagulls, seaweed, and grits of sand in nearly every crevice of your clothes, car, and body, Phoenicians’ lust for California’s coast is a classic case of “the grass is always greener.” Save yourself the time and money and stop by one of the many parties happening at popular pools all over the Valley. We recommend diving into the Vegas-style partying that Maya Day Club offers (7333 East Indian Plaza, Scottsdale), or the new and trendy Lylo Swim Club at Rise Uptown (400 West Camelback Road).

Night Hiking
The desert comes alive when the sun goes down. And night hiking is a great way to get some outdoorsy exercise without burning up. You’ll need water and a head lamp — though during a full moon, you can often go without the latter. If you’re new to hitting the trails by night, South Mountain offers a few easy treks to get you started, including the Alta Trail and the Holbert Trail. There’s also the Apache Vista Loop Trail in the Phoenix Sonoran Preserve, the North Mountain National Trail in North Mountain Park, and the Black Top Mesa in the Superstition Wilderness Area. Obviously, it’ll be dark out. So it’s best to pick trails you’re already familiar with or to bring along an expert. The Heard Museum is both a place to learn and hide from the summer heat.
Lynn Trimble

World-Class Museums
Museums in Arizona cover a huge range of interests. Also? They have really nice air conditioning. A few of our favorites include the Heard (2301 North Central Avenue), specializing in Native American art and history; the Musical Instrument Museum (4725 East Mayo Boulevard), which surveys the history of music-making with a global eye; Phoenix Art Museum (1625 North Central Avenue), the largest art museum in the Southwest; and Arizona Science Center (600 East Washington Street), which promises fun for curious kids and nerdy adults alike. This summer, PAM presents “Fearless Fashion: Rudi Gernreich” through September 26, while the Heard hosts the "Larger Than Memory Digital Experience," which features works by American and Canadian contemporary artists, through September 6.

(This article originally appeared in 2013 and has been updated.)
KEEP PHOENIX NEW TIMES FREE... Since we started Phoenix New Times, it has been defined as the free, independent voice of Phoenix, and we'd like to keep it that way. With local media under siege, it's more important than ever for us to rally support behind funding our local journalism. You can help by participating in our "I Support" program, allowing us to keep offering readers access to our incisive coverage of local news, food and culture with no paywalls.
Make a one-time donation today for as little as $1.