11 Things to Do This Week in Phoenix

Samurai Comics locations in Chandler and Mesa are gearing up for the Arizona Comic Mini Expo. Benjamin Leatherman

The start of a new week can be a downer for some — unless you've got some great events to look forward to. This week, you can get a taste of Finland, watch some wrestling, do yoga, and much more.

If your life’s been feeling a bit dreary lately, try adding a quick pop of color and light with the Xanadu Glow-Along at Alamo Drafthouse Cinema. It’s happening at Alamo’s Tempe movie house, 1140 East Baseline Road, at 6:30 p.m. on Monday, August 9. Expect a retro vibe complete with glow sticks and confetti, where you can experience the thrill of early MTV days complete with spandex and mousse-laden hairstyles. Naturally, you’re free to dress the part. For the uninitiated, here’s a little summary of the flick: A former bandleader played by Gene Kelly and a mysterious woman played by Olivia Newton-John convince a disillusioned artist played by Michael Beck to open a fabulous roller disco. It’s the perfect way enjoy some cinematic time travel and get your week off to a stress-free start. Tickets are $16.22. Lynn Trimble

Everybody’s looking for ways to unwind these days, and yoga studios are offering some creative options. Over at Sutra Studios, 1029 North First Street, you can try their Color Quest: Prism class at 8 p.m. on Tuesday, August 10. The class includes yoga, visualization, mantra, sound healing, breath work, and color therapy designed to “energize and balance each chakra.” The experience will end with a guided meditation focuses on bringing alignment to your life, which means you can head into the rest of the week feeling more balanced and composed. The class is $25 or free for members. It’s designed to yoga practitioners at all levels, so no worries if you’re new to the yoga scene. Lynn Trimble

You’ll see the faces of two artists murdered in Roosevelt Row on a new mural nearing completion on the west side of the Carly’s Bistro building. It’s a wonderful tribute to artists David Bessent and Zachary Walter, who were shot while walking home after their October First Friday shift at Jobot Coffee & Bar in 2018. Turns out, there’s another tribute to these artists, which you can be a part of this Wednesday night, August 11, starting at 8 p.m. It’s a free drawing night organized by Catie Cotter, who launched the weekly tradition with Bessent and a few other friends back in 2013. Just show up and look for the drawing supplies, then join in with others eager to enjoy a night of creativity and community. Lynn Trimble

Guns N’ Roses fans got some good news last week, after the band announced it would be releasing its first album in 13 years. Meanwhile, a string quartet called Sweetwater Strings is gearing up to perform the band’s classic Sweet Child O’ Mine as part of the Candlelight: Rock Classics concert happening at 9 p.m. on Thursday, August 12, at Sunkist Warehouse, 254 West Broadway Road, Mesa. It’s part of a tentative set list that also includes hits from AC/DC, Aerosmith, Bon Jovi, Led Zeppelin, Survivor, Queen, and The Cure. Seating for two will cost you $50 per person. If you’re wondering who to take along, it might be a good time to grab that friend who has a thing for the Bee Gees or the Eagles. Lynn Trimble

Maybe Gilbert isn’t the first place you think of when you’re looking for local arts and culture. But it’s actually home to several creative spaces, including Art Intersection gallery and The Art House, a venue designed to art classes and parties with a creative twist. The Art House, 36 North Gilbert Road, Gilbert is presenting an Abstract Florals Canvas Class from 6:30 to 8:30 p.m. on Friday, August 13. It’s a chance to paint a floral scene while guided by an experienced artist, and order a drink from the bar if you feel like that might up your artistic talent. The class costs $39, and you’ll leave with a painting you can proudly display in your home or office. Lynn Trimble

Come find a friend this week at Bookmans in Phoenix.
Bookmans

You might associate huskies with colder climates in places like Alaska, but there are plenty of the adorable dogs right here in Phoenix, and some are looking for good homes. Lucky Huskies Rescue is bringing a few of its furry adoptable friends to a free Barks & Books adoption event from 11 a.m. to 2 p.m. on Saturday, August 14. It’s happening at Bookmans Entertainment Exchange, 8034 North 19th Avenue. If you’ve been thinking about getting a dog, but haven’t found just the right match yet, head over to see whether one of these huskies might be just the faithful companion you’ve been hoping to find. Lynn Trimble

It's all about Finland during the next Passport Series event at FOUND:RE Phoenix.
Match Market & Bar

Perhaps Finland isn’t the first place that comes to mind when you’re ready to experiment with cuisines and cocktails from other countries. But don’t sell Finland short when it comes to delicious offerings. It’ll be the center of attention at the Match Market & Bar on Saturday, August 14. That’s where FOUND:RE Phoenix, 1100 North Central Avenue, is holding its Passport Series: Finland event from 6 to 10 p.m. They’ll be transforming the pool and bar areas with decorations and entertainment inspired by Finnish culture. Tickets are $15, which includes a specialty drink. Pick up a passport while you’re there, because you can get stamps at various events in the series, which could help you win some fun giveaways. Lynn Trimble

Alexander Hammerstone is a formidable foe in the squared circle. The 6-foot-4 professional wrestler and Valley resident is 251 pounds of muscle who has made a career out of pummeling opponents with slams, suplexes, and powerbombs between the ropes. This weekend, Hammerstone will dish out more punishment when he takes on the equally intimidating Dom Vitalli and Joe Graves in a “Bully Brawl” during the main event of Phoenix Championship Wrestling's Rebirth at the Revelry on Saturday, August 14. The local wrestling event will take place at Mesa bar and entertainment venue The Revelry, 1065 North Dobson Road, and feature several other hard-hitting bouts, including Mr. Klassic battling Jon Wolfgang and the fearsome Lord Drako and Krazzy Chaoz in a tag-team match against Dallas King and Michael Benjamin Wexler. Bell time is 7 p.m. and tickets are $15. Benjamin Leatherman 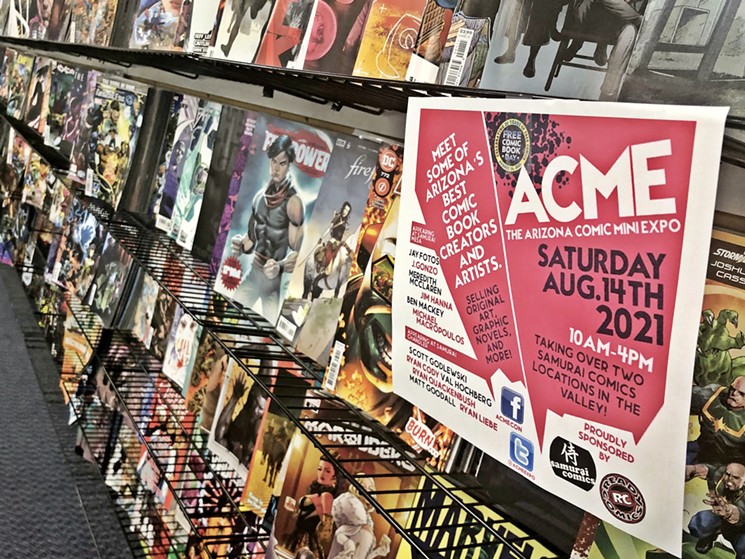 Samurai Comics locations in Chandler and Mesa are gearing up for the Arizona Comic Mini Expo.
Benjamin Leatherman

Like other local comic book shops around the Valley, Samurai Comics is expecting a crowd on Saturday, August 14, during Free Comic Book Day, although the festivities will involve more than just giving away special editions of famous titles. The chain’s locations in Mesa, 2639 East Broadway Road, and Chandler, 1994 North Alma School Road, will host the annual Arizona Comic Mini Expo, a daylong celebration of the sequential art form showcasing local comic book creators. More than a dozen artists will be featured at both stores, including appearances by Jay Fotos (Rising Rebels), J. Gonzo (La Mano del Destino), and Meredith McClaren (Heart in A Box) in Mesa, and Scott Godlewski (Copperhead) and Val Hochberg (Mystery Babylon) in Chandler. Hours are from 10 a.m. to 4 p.m. Admission is free. Benjamin Leatherman

This week is your first chance to see "Convergence WIP" at Eye Lounge.
Eye Lounge

It’s hard to miss all those construction projects happening around Roosevelt Row. But developers aren’t the only ones working to shift the local landscape. Over at Eye Lounge, an artist collective that counts many of the region’s most accomplished artists as alumni, three current members will be showing their own works in progress in a new exhibit titled "Convergence WIP," giving viewers a chance to explore the ways they’re building new meanings and perspectives. See how Gina DeGideo uses photography to explore things that impede her daily path, how Megan Driving Hawk addresses the ways present choices can heal both future and past, and how Charles Kurre investigates transformation through wilderness and urban environments. The Eye Lounge gallery, 419 North Roosevelt Street, will be open 11 a.m. to 3 p.m. on Sunday, August 15. Lynn Trimble 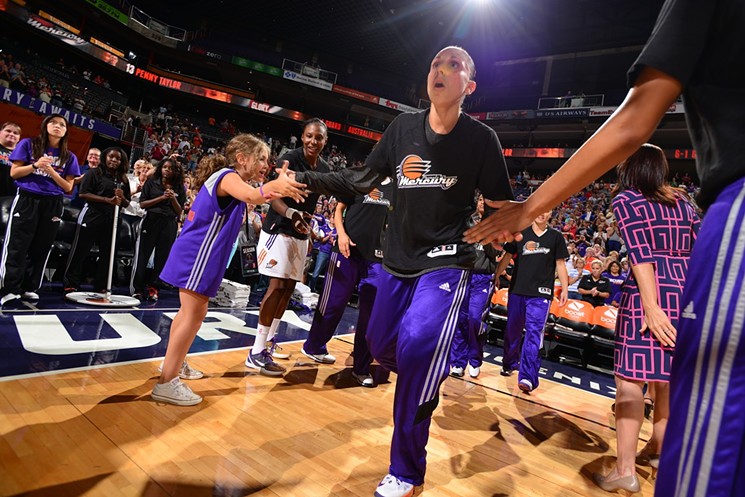 After helping the U.S. women’s basketball team conquer the world at the Tokyo Olympics and win its seventh-straight gold medal, Diana Taurasi and Brittney Griner face their next tall task: reversing the fortunes of the Phoenix Mercury. The Valley’s WNBA team heads into the second half of the current season near the bottom of the standings and facing an uphill battle. Prior to the mid-season break for the Olympics, the Mercury lost six of its last 10 games and have only won three at home this year. In other words, Phoenix will need to rally and win most of their remaining 13 games in order to make the postseason. First up is a battle against Atlanta Dream on Sunday, August 15, at Footprint Center, 201 East Jefferson Street. Tip-off is at 3 p.m. Tickets are $27 and up. Benjamin Leatherman
KEEP PHOENIX NEW TIMES FREE... Since we started Phoenix New Times, it has been defined as the free, independent voice of Phoenix, and we'd like to keep it that way. With local media under siege, it's more important than ever for us to rally support behind funding our local journalism. You can help by participating in our "I Support" program, allowing us to keep offering readers access to our incisive coverage of local news, food and culture with no paywalls.
Make a one-time donation today for as little as $1.