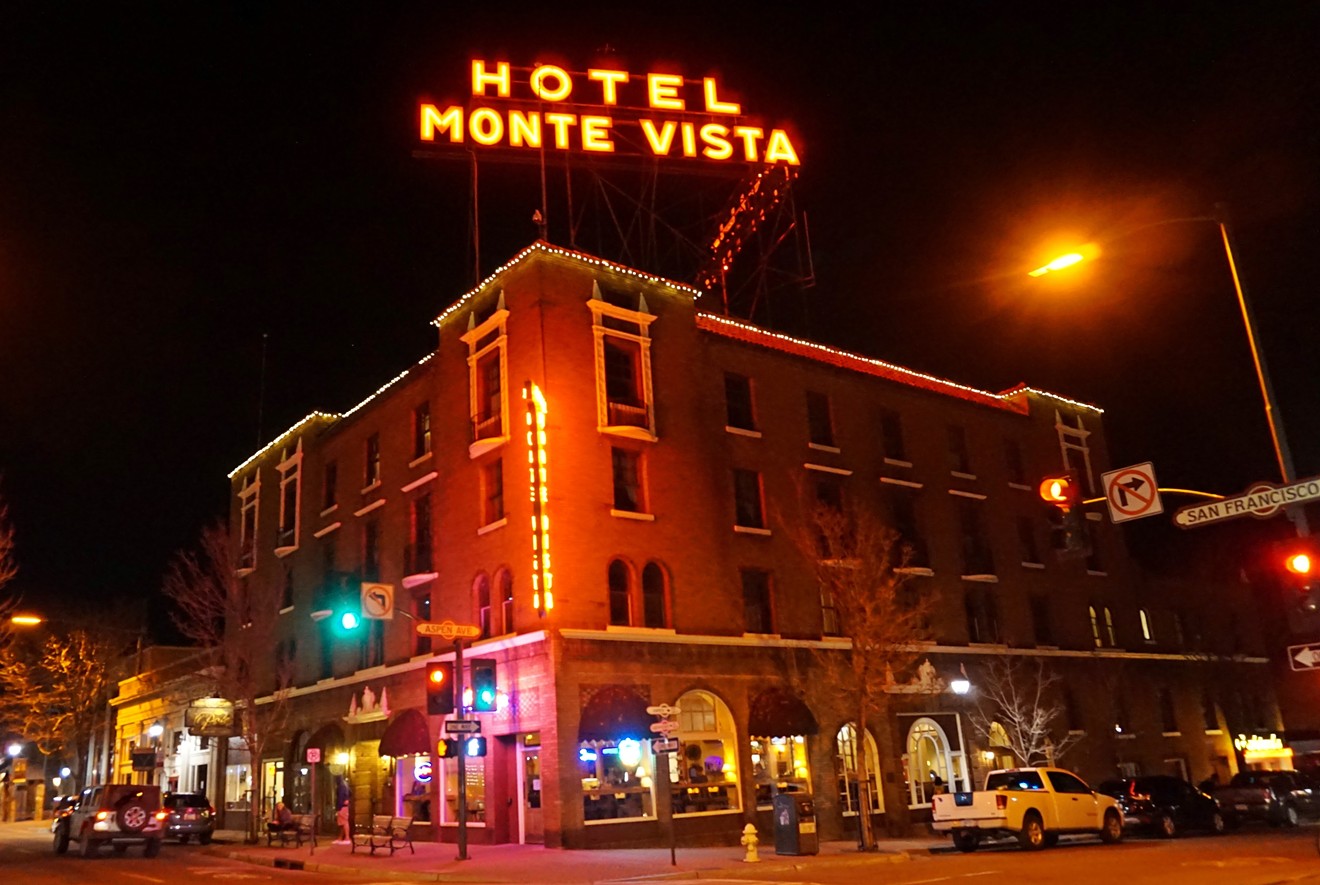 Things go bump in the night at the Hotel Monte Vista and other spots around Arizona. Matt Kieffer/CC BY-SA 2.0/Flickr
It seems like every vintage building still standing in Arizona has a story to tell – and sometimes these tales include a ghost or two. Just ask the proprietors of Casey Moore’s in Tempe, Tombstone’s Birdcage Theatre, or the Hotel Monte Vista in Flagstaff, all of whom claim their places are the domain of specters, spirits, or other supernatural phenomena.

You could also hit up Marshall Shore, the local “hip historian” who's familiar with many of these tales. It’s one of the reasons he conducts walking tours around downtown Phoenix every October that explores some of the city's more infamous haunts, like the Hotel San Carlos and Orpheum Theatre.

They aren’t the only locations where ghosts are reportedly known to frequent. A number of historic locations around the Valley and throughout Arizona are widely considered to be haunted, ranging from old hotels and theaters to mines, prisons, and even airplane cemeteries. Here’s a look at 13 of the most notorious spots in our state that are widely considered to be haunted. 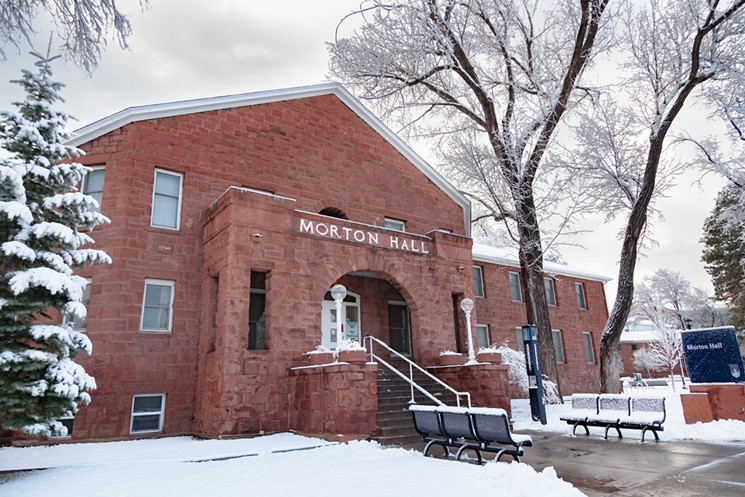 The near-century-old women's dormitory on the forested grounds of Northern Arizona University is said to be haunted by the forlorn spirit of a heartbroken student named Kathy, who supposedly hanged herself in a stairwell during a winter break back in the early 1950s. Depending on who's telling the tale, she was either abandoned by her family or had a boyfriend in the armed forces who died in combat. Over the decades, the alleged apparition has been blamed for a litany of phenomena, including lights flickering, radios and televisions malfunctioning, posters flying off the walls, and blankets being pulled off beds. 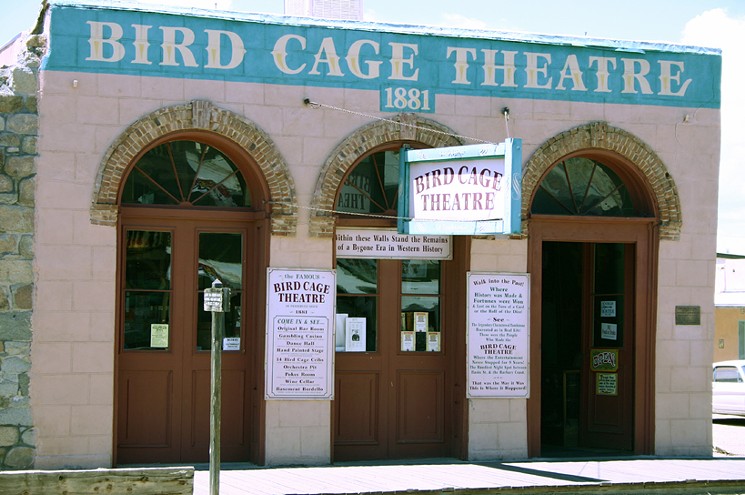 The rough and ready city of Tombstone may have been the town that was "too tough to die," but its inhabitants over the past 140 years or so haven't been as lucky. Plenty of folks have shuffled loose the mortal coil since it was first settled in 1877, including the participants in the legendary O.K. Corral shootout and the longtime occupants of the equally renowned Boothill Graveyward. The Birdcage Theatre – a former saloon, gambling den, and brothel – also saw plenty of bloodshed in its day, as 16 different deadly gunfights took place on the historic property. As such, this former house of ill repute is a hot spot for alleged ghost sightings and encounters with otherworldly beings. 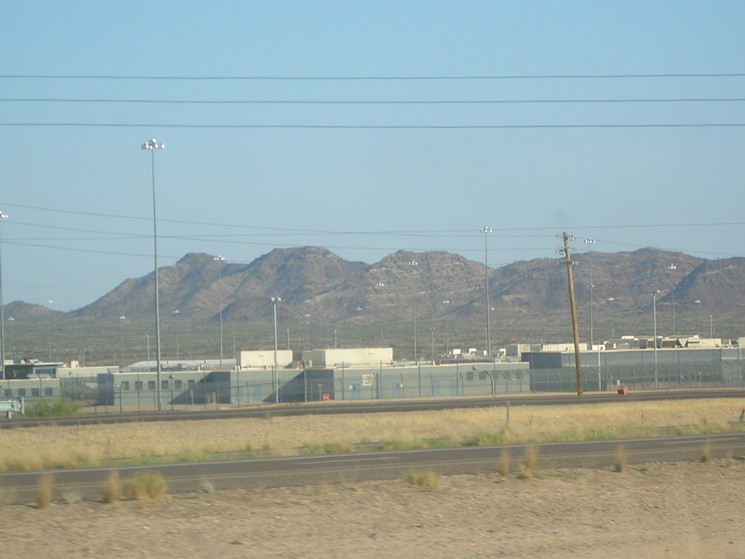 An exterior view of the Arizona State Prison Complex in Florence.
Wikipedia

Death sentences have been carried out at the Florence Prison since 1910. According to the Arizona Department of Corrections website, roughly 100 inmates have been executed during the past century inside the confines of the state’s first hoosegow in Florence, either by hanging, lethal injection, or a trip to the gas chamber. So it shouldn't really come as much of a surprise that there have been more than a few (possibly apocryphal) yarns spun over the years about both inmates and guards witnessing several instances of "mists that looked in human form" or having their ears assaulted with "screams and other strange sounds" in the building that houses the prison's death chamber or the adjacent cell blocks. 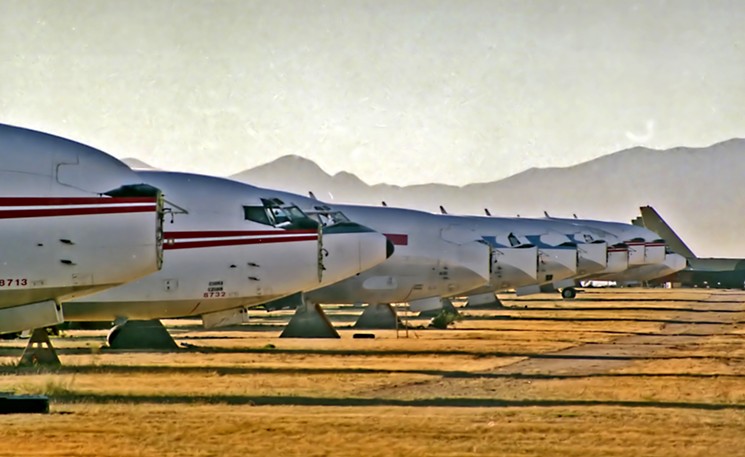 Decommissioned airliners at the 309th AMARG in the 1990s.
Phillip Capper/CC BY 2.0/Flickr

Where do airplanes go when they die? Depending on their particular model, many obsolete or aging flying machines have wound up at this facility attached to Davis Monthan Air Force Base in Tucson. It's the largest boneyard in the world and is where the U.S. military has stored or dismantled its retired and out-of-service aircraft since the mid-1940s. A few ghost stories have been spun about the place over the decades, such as phantom World War II fighter pilots roaming the grounds. 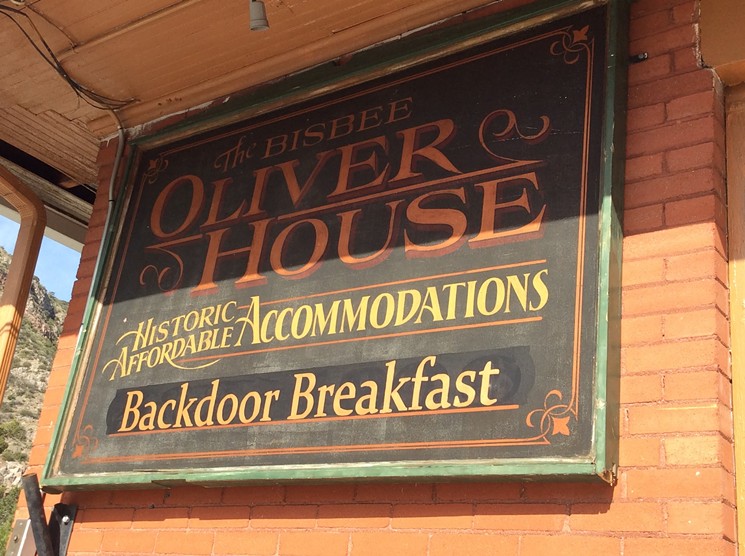 This funky, two-story bed and breakfast dating back to the early years of the 20th century is a favorite of ghost hunters everywhere due to its bloody history. Per local lore, the former boarding house has been the site of numerous murders stemming from cases of adultery. One particularly grisly tale involves a cop who blew away his cheating wife and her paramour in 1920 before going on to slaughter more than a dozen others throughout the building. Over the years, guests at the Oliver House have reported such unusual occurrences as doors and shutters closing, ghostly footsteps in the hallways, or sounds of gunshots being heard. There's a rogue's gallery of ghosts at the Monte V in Flagstaff.
Franck Michel/CC BY 2.0/Flickr

Many a celebrity has laid their head at this historic Flagstaff hotel, including such famous names as Michael J. Fox, Siouxsie Sioux, and the late Bob Hope. These celebs are nowhere near as colorful as its rogue’s gallery of resident spirits, though. According to the hotel's website, spirits like “The Meat Man” (a regular guest who’d hang raw meat from chandeliers in his room) or the late bank robber who bled to death in the Monte Vista’s downstairs cocktail lounge in 1970 supposedly haunt the place. There’s also “The Phantom Bellboy,” an infant who cries out regularly in the building’s basement, and the spirit of an elderly woman that reportedly can be seen in a rocking chair near the window of one third-floor room. 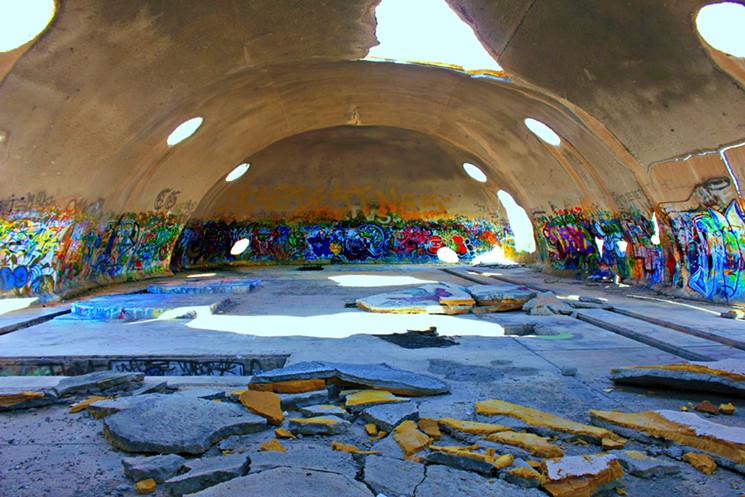 There's an eerie aura surrounding the unusual-looking, UFO-shaped concrete structures located on a five-acre patch of desert terrain off Interstate 8 south of Casa Grande. Vacant since the early '80s, when a now-defunct California electronics manufacturer constructed the buildings for office space and a factory, the so-called Thornton Road Domes have become a quaint curiosity, fodder for local shutterbugs, and an impromptu gallery for graffiti artists. Some spooky stories have sprung up in recent years about shadowy figures scurrying about the property, slamming car doors, kicking around rocks, or unleashing demonic-sounding screams. Though they're still more or less standing as of this writing, Pinal County has ordered the demolition of the domes. 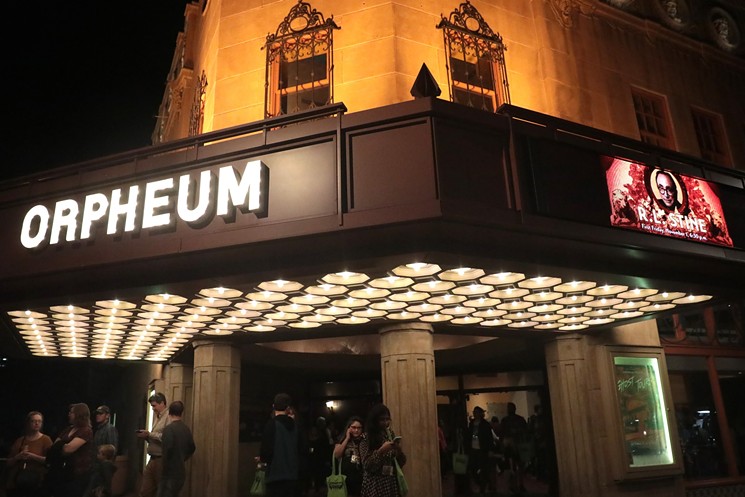 This downtown Phoenix gem and former vaudeville house, which first opened in 1928, has more to offer besides its gorgeous, well-appointed interior and vintage atmosphere. The Orpheum Theatre’s staff swear there are more than a few ghosts to be found inside. Chief among them is an apparition named “Maddie,” who supposedly dwells in the balcony and is famous for nudging or shushing patrons during performances. In other words, if you dare speak up during a show at the Orpheum, you may wind up hearing a voice from the great beyond telling you to shut it. 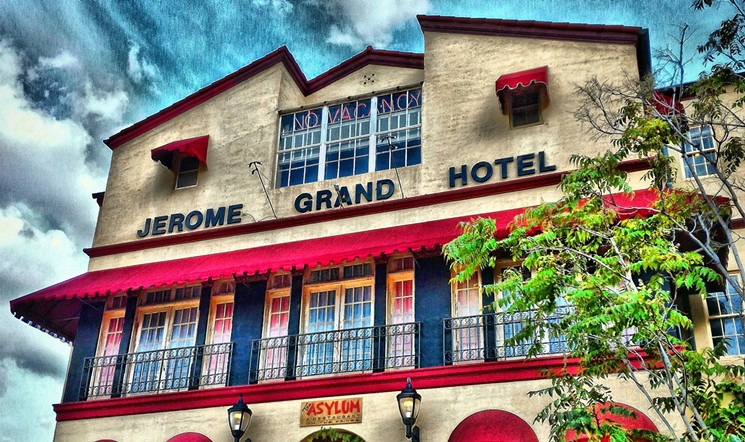 Jerome's reputation as a ghost town is well-earned, considering the quaint hillside hamlet in northern Arizona is filled with infamous yarns about specters and spirits that haunt its historic buildings. None are as notorious, though, as the monolithic, four-story Jerome Grand Hotel that looms over the rest of the town. Debuting in 1927 as the United Verde Hospital, this was where local miners came after suffering gruesome injuries while digging for copper (many of whom succumbed to their grievous wounds), or where the insane were brought to be cured of their mental illnesses. After closing in 1950, the building reopened some 47 years later as a vintage hotel where many a visitor has supposedly been scared by visions of phantom nurses, faint cries of distress, or the odd scream or two. 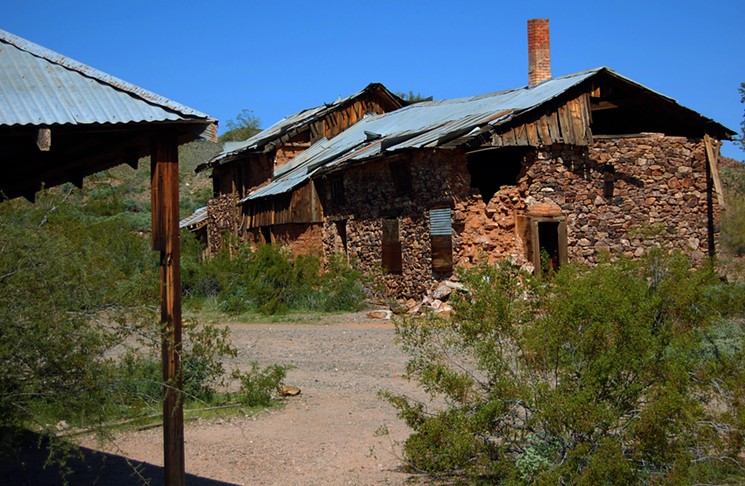 The Vulture Gold Mine outside Wickenburg went from boom to bust back in the late 1800s.
Midnight Believer/Flickr

As the cast members of Ghost Adventures could attest, the Vulture Mine is a truly spooky place indeed. Paranormal investigators from the Travel Channel reality show paid a visit to the abandoned, 1880s-era former gold prospector's paradise two years ago, and – if their exploits are to be believed – had rocks thrown at them, captured recordings of apparitions telling them "Get out!" and "You're gonna die," and had the willies scared out of them. Your mileage may vary if you dare pay a visit to the attraction, which is located approximately 70 miles northwest of the Valley. 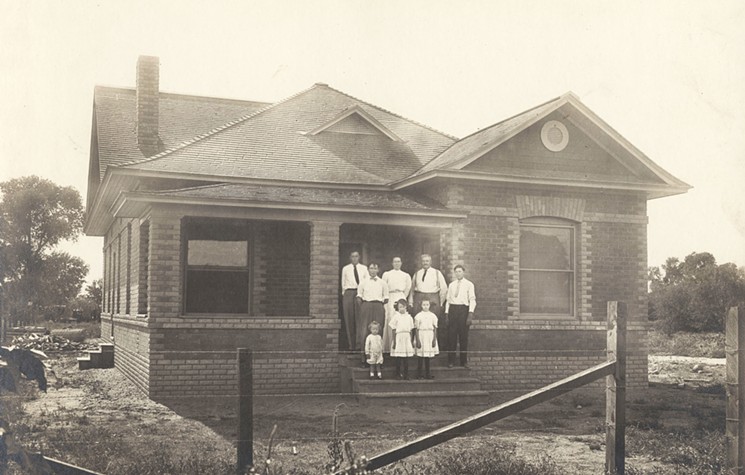 One of the many charms of this popular haunt for ASU students and Tempe residents are all the legends that have been built up over the decades regarding its resident ghosts. The most famous of which was a gal who lived upstairs in the former boarding house and residence built in 1910 and was strangled upstairs by her jilted boyfriend. Various neighbors have reported seeing figures moving around after closing time through the windows of Casey Moore's second floor (now a dining room) longtime manager Michael Loney and co-owner Gavin Rutledge have also had a few close encounters with anonymous apparitions over the years. Heck, Phoenix New Times even investigated the legends for ourselves back in 2008. 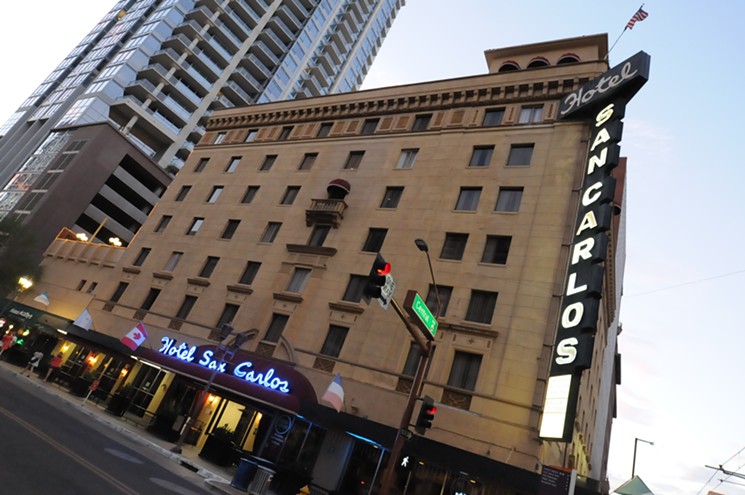 When troubled ingenue Leone Jensen threw herself from the roof of the Hotel San Carlos in May 1928, her tragic suicide ultimately gave the downtown Phoenix landmark its most enduring legacy and a haunted hotel. The 25-year-old's tragic plunge off the seven-story building launched hundreds of tales of a ghostly woman in white roaming the hallways and certainly proved to be a profitable shtick that its ownership continues to play up to this day. Naturally, it’s been a stop on any number of local ghost-hunting tours over the decades. 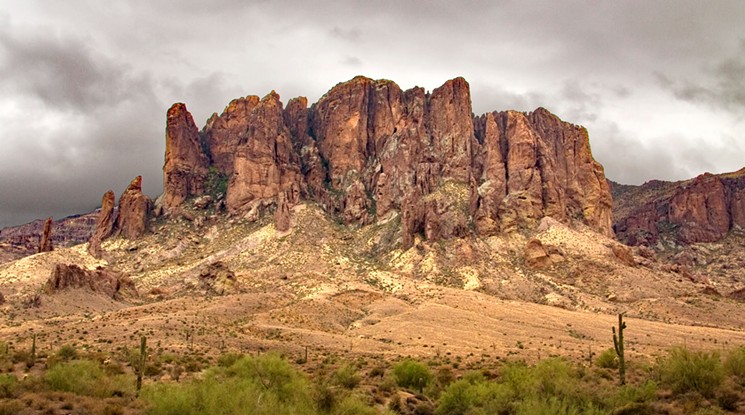 There are (allegedly) both gold and ghosts in thar hills.
ksblack99/Flickr

Though a scenic state park, Lost Dutchman is historic and spooky as hell. Yes, the Superstition Mountains allegedly hold the fabled Lost Dutchman’s mine, which is also supposedly haunted and guarded by spirits. Dozens of people have lost their lives searching for the Lost Dutchman Mine or gold, or both. “Scattered at the foot of the Superstition mountainous area are ‘holes’ dug into the earth by desperate miners called ‘prospectors’ searching for that oh-so-rare yellow metal we know as gold,’" says Lost Dutchman park manager Tim Kristof. “Gold fever was rampant in the Old West and somewhat for a few souls today.” Nearby residents have reported shadows, lights, and of course, tons of hearsay.

Editor's note: This story was originally published in October 2012 and has been updated from its original version.
KEEP PHOENIX NEW TIMES FREE... Since we started Phoenix New Times, it has been defined as the free, independent voice of Phoenix, and we'd like to keep it that way. With local media under siege, it's more important than ever for us to rally support behind funding our local journalism. You can help by participating in our "I Support" program, allowing us to keep offering readers access to our incisive coverage of local news, food and culture with no paywalls.
Make a one-time donation today for as little as $1.