The Propeller Group, Television Commercial for Communism (still), 2011. Single-channel video (color, sound), 60 seconds. Courtesy of The Propeller Group and James Cohan, New York
Communism hasn’t taken hold at Phoenix Art Museum. But you will find a communist manifesto, along with three flags and a TV commercial for a new communism prominently displayed there.

That’s because the museum recently opened “The Propeller Group,” an exhibition named for the Vietnam-based art collective that explores the intersection of advertising and propaganda.

Taking a deep dive into the exhibition can be a little daunting, because the collective’s work is rooted in the complexities of recent history and contemporary life. So we’ve put together a user’s guide, with key points culled from conversations with The Propeller Group artists and the exhibition catalogue.

We suspect you’ll get more out of the show if you know a little something about the art collective and its work before you see it. Of course, how you interpret their work is up to you.

Most importantly, you should allow ample time to explore the exhibition. You’ll need at least an hour to tour the show, which features several videos that create important context for the other art objects and artifacts in the exhibition. If you can spare 90 minutes, even better.

The Propeller Group, The Living Need Light, The Dead Need Music (still), 2014. Single-channel video (Color, 5.1 surroundsound), 20 minutes.
Courtesy of The Propeller Group and James Cohan, New York
What is The Propeller Group?
The Propeller Group is a three-person art collective based in Vietnam. Artists Tuan Andrew Nguyen and Phunam hail from Ho Chi Minh City, and Matt Lucero hails from Southern California. All three were born during the mid-1970s and identify as people of color. Lucero and Nguyen hold MFA degrees from California Institute of the Arts.

How did The Propeller Group start?
The artists founded The Propeller Group in 2006, but realized that making art in Vietnam could be a dangerous affair. So they formed an advertising agency, which gave them more freedom to do the filmmaking that’s central to their work. They also founded the contemporary art organization Sàn Art based in Los Angeles and Saigon (which Vietnamese officials renamed Ho Chi Min City after the Vietnam War). 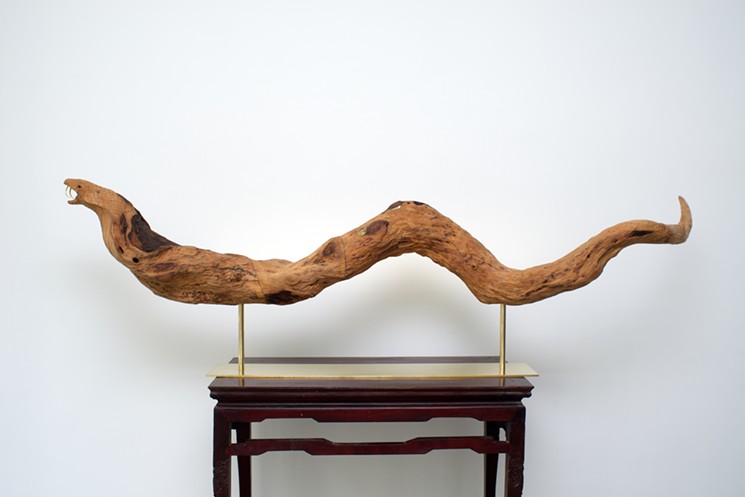 What’s the historical context for their work?
In a word, globalization. Vietnam was inundated with global brands after opening its borders to global industrial capitalism during the late 1990s. Even so, exhibition catalogue author Naomi Beckwith explains, Vietnam continued to struggle with censorship, corruption, inequality, and surveillance.

Does the exhibition address the Vietnam War?
Yes and no. The artists explore the war’s significance, and it’s helpful to know something about the war when viewing their work. But they also address ways Vietnam’s social, economic, and political landscape has shifted during the post-war era.


"The Propeller Group’s ambitious projects are anchored in Vietnamese history and its complex present-day conflation of economic liberalism with a repressive sociopolitical agenda." – From the exhibition catalogue


What about other influences?
The artists came of age during the heyday of graffiti, hip-hop, and street culture, which influences their work. But they’ve got other shared interests, including personal histories, origin stories, and death, which often inform their work.

What's the significance of this exhibit?
This is the first time works in this exhibition have been shown together. The show was organized by the Phoenix Art Museum, the Museum of Contemporary Art Chicago, and the Blaffer Art Museum at the University of Houston. "The Propeller Group" is the curatorial debut for Gilbert Vicario, who joined the museum as chief curator in late 2015.

The Propeller Group, The Living Need Light, The Dead Need Music (still), 2014. Single-channel video (Color, 5.1 surroundsound), 20 minutes.
Courtesy of The Propeller Group and James Cohan, New York
What’s included in the show?
“The Propeller Group” includes seven multipart projects from the last five years, shown in three galleries on the main and lower floors of the museum’s south wing. Here are the basics about each project.

For those who want to learn more about The Propeller Group, before or after seeing the show, there’s a sleek black exhibition catalogue called The Propeller Group available in the Phoenix Art Museum gift shop. Think of it as another riff on the collective’s foray into art and commerce.

"The Propeller Group" continues through Sunday, May 14, and is included with museum admission. Find more information about the exhibition and related programming on the Phoenix Art Museum website.

Correction: This post has been updated from its original version to include the correct name of the show's curator.